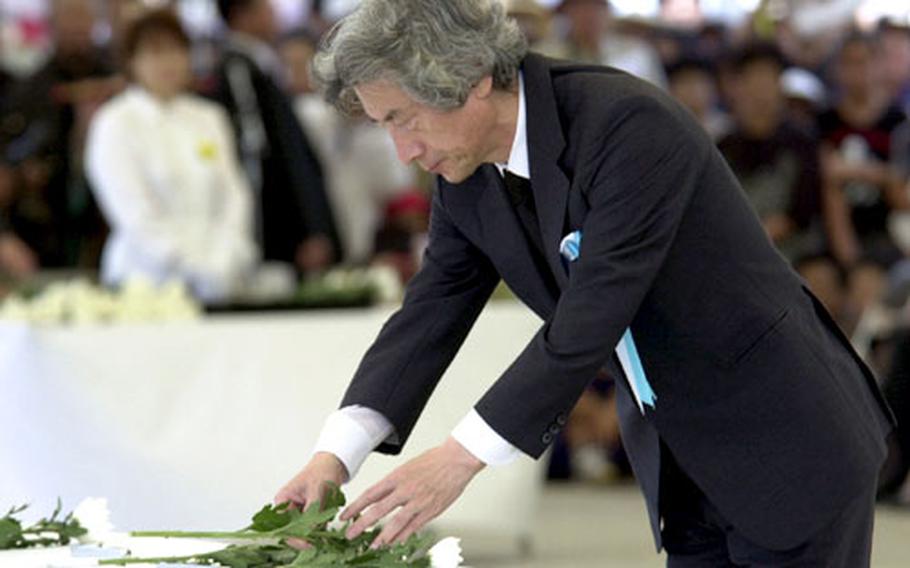 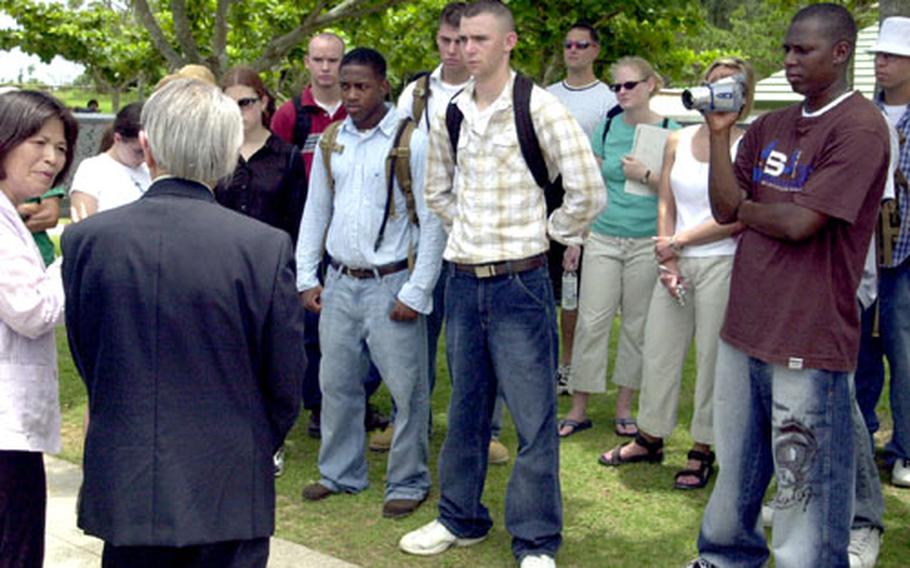 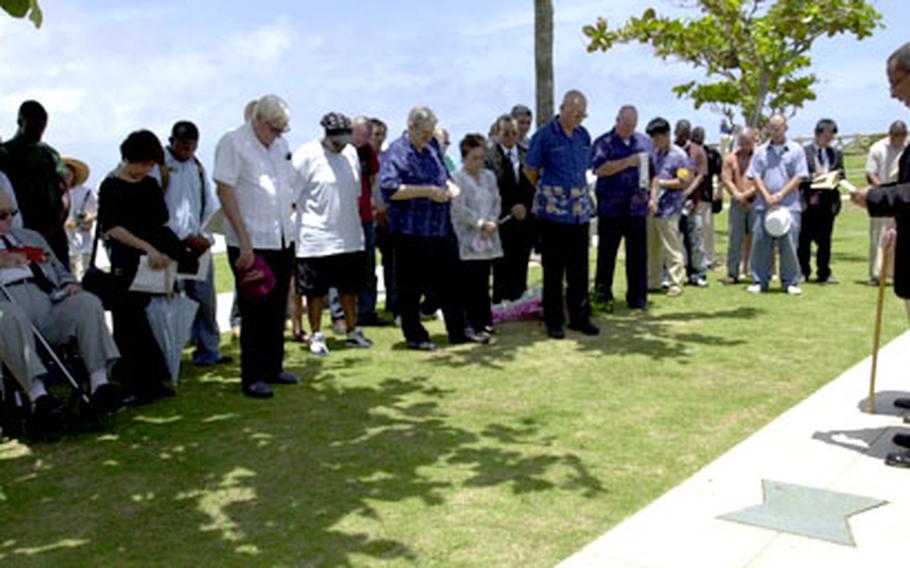 U.S. Navy Cmdr. Derek Ross, group chaplain for Task Force 76, says a prayer during a short ceremony Thursday in honor of the Americans killed during the Battle of Okinawa. The ceremony took place after a larger 60th anniversary event at Peace Prayer Park in Itoman. (Fred Zimmerman / S&S) 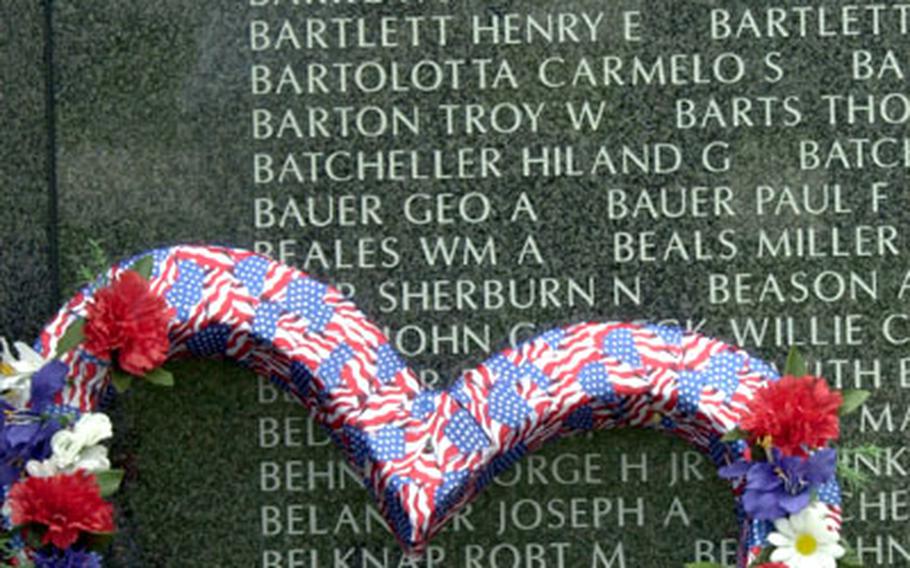 A wreath at the foot of one of the panels in Peace Prayer Park displaying the names of Americans killed during the Battle of Okinawa. (Fred Zimmerman / S&S) 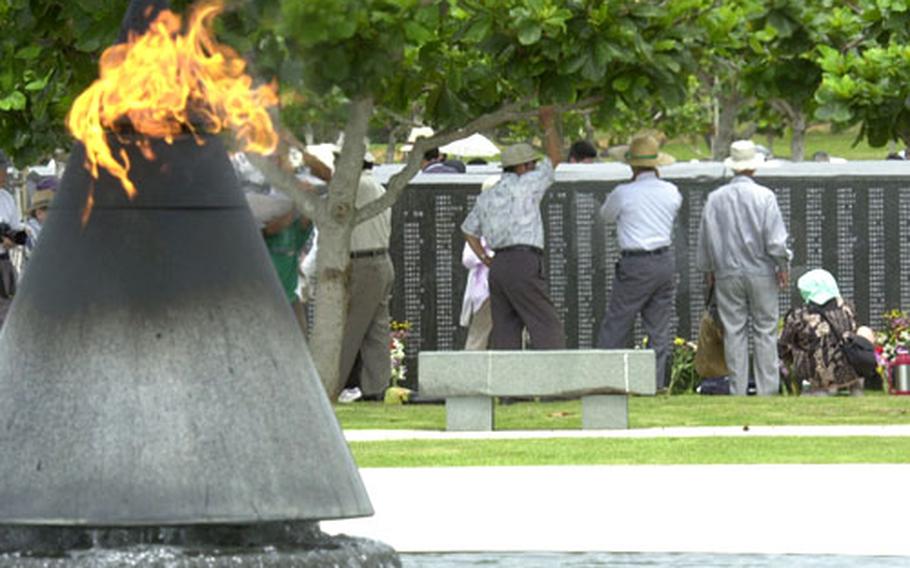 The Eternal Flame at Peace Prayer Park in Itoman burns as Okinawans look at panels containing names of those killed in the Battle of Okinawa. (Fred Zimmerman / S&S)

ITOMAN, Okinawa &#8212; About 5,200 people, including Japanese Prime Minister Junichiro Koizumi and Okinawa Gov. Keiichi Inamine, gathered Thursday at Okinawa Peace Prayer Park to commemorate the 60th anniversary of the end of the 90-day Battle of Okinawa, in which 200,000 people died.

Koizumi praised Okinawans, saying, &#8220;After the war, Okinawa has risen from the ashes &#8230; and achieved powerful development.&#8221; But he reiterated previous statements suggesting his government would try to balance Okinawans&#8217; desire to reduce the U.S. military footprint on their island against national security needs.

Koizumi said, &#8220;The government of Japan is engaging in negotiation with the U.S. government to reduce the burden of local communities, including Okinawa, while maintaining deterrence power of U.S. Forces Japan.&#8221;

Outside the tents where official guests were seated for the ceremony, thousands of people visited the Cornerstone of Peace, engraved with names of victims &#8212; including Okinawan civilians, Japanese and U.S. soldiers and Chinese and Korean forced laborers.

The black granite monuments, which fan out toward the Pacific Ocean, were dedicated in 1995 to honor every victim of one of the Pacific&#8217;s fiercest battles.

Mitsuko Sakumoto, 70, sought a name of a Japanese soldier who&#8217;d been kind to her during the war.

&#8220;Unlike brutal soldiers told in many stories these days, he was a very kind man,&#8221; she said. Sakumoto, then 10, learned songs from the soldier, whose name she remembered only as Otsuka.

Sakumoto said she and her mother fled their Naha home after Allied forces landed on the island. After days of hiding in a cave, one day she heard a voice coming from outside, she said: &#8220;It came through a loudspeaker saying that the war was over.&#8221;

After some hours, she and her mother decided to surrender, she said. The first thing she saw in the bright sunlight was a U.S. soldier. He offered her water &#8212; and when he saw her hesitate, smiled at her and drank from the canteen himself. She then accepted.

While Okinawan families paid their respects to lost loved ones, a small group of Camp Hansen Marines were learning about the war from a perspective new for many. They gathered around a former Japanese soldier who fought on Okinawa, listening to his war stories through a translator.

After the short history lesson, the Marines gathered with former U.S. servicemembers and Okinawans for a short ceremony assembled by the United Service Organizations in tribute to the American names on the wall.

Navy Cmdr. Derek Ross, Task Force 76 group chaplain, said during a prayer at the ceremony, &#8220;We must forge from the painful past, a bright shining future.&#8221;