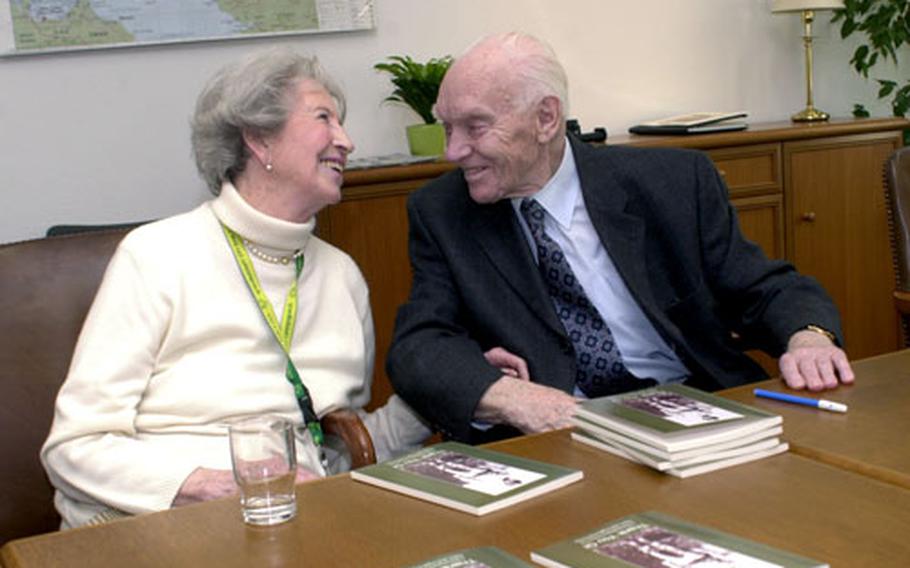 Ingeborg and Hans Richter remember their experiences at the end of World War II when they escaped the Russian-held portion of Germany with the help of U.S. soldiers. The couple recently donated 100 copies of their book, "Thank You GI," to soldiers in the NATO command in Heidelberg. (Michael Tolzmann / U.S. Army)

HEIDELBERG, Germany &#8212; They slept in a pigpen, hid in the forest, jumped into haystacks and forded streams. Like many thousands of Germans fleeing the Russians as World War II came to an end, Hans and Ingeborg Richter decided their best bet was to somehow get across the Elbe River to the Western sector and throw themselves on the mercy of the Americans.

Their story had a happy ending.

Now in their 80s and living near Heidelberg, the Richters have self-published a short book about their adventures in the spring of 1945, as they dodged Russian soldiers, German soldiers and the occasional tractor to make their escape.

Last week, the pair talked about their book and that tumultuous period in their lives, when they were young and the world they&#8217;d known had been destroyed. The couple had been cultured, privileged Germans. He was the son of musicians and, beginning at age 12, had become a well-known film actor known for playing &#8220;rascal&#8221; roles; she was a biologist with a relative who&#8217;d won a Nobel Prize.

And as Berlin burned and their country was defeated by the Allies, they still viewed American soldiers as saviors.

They were no fans of Adolf Hitler, they said, and often discussed late at night after musical evenings in Berlin how he was bringing the country to ruin. Hans Richter, according to the book, was questioned by the Gestapo for speaking with Jewish friends in a Vienna, Austria, hotel lobby, and he says would have been arrested if he hadn&#8217;t been drafted into the German army first. And, noted Ingeborg Richter, &#8220;What terrible uniforms.&#8221;

In the Richters&#8217; story, the American soldiers are handsome and kind, always handing out chocolate and cigarettes, making jokes and cheerfully ignoring the rules. They are a friendly, casual people, who are always sitting back with their feet propped up on the handiest desk or table. They frequently whistle at Ingeborg or carry her luggage and, when Hans is made butler to some American officers, they teach him how to make a very potent cocktail involving five shots of liquor.

According to the book, the Americans helped them escape from living under Soviet communism &#8212; or the wrath of the Russian soldiers, who&#8217;d been fighting Nazi Germany for years, seen their country invaded and had suffered millions of casualties. Americans also helped them reunite, the Richters wrote, after they were separated when Hans Richter was taken to an American prisoner of war camp.

The book, translated into English, was distributed to all the U.S. soldiers in the Allied Land Component Command Headquarters Heidelberg. Among its readers was Lt. Col. Terry Popravak, air liaison officer for Ramstein Air Base.

Popravak said he was struck by several things as he read the book. One was the Richters&#8217; and, presumably other Germans&#8217; embrace of their American occupiers.

Also, Popravak said, the book points out that despite recent diplomatic strains over Iraq, Germany and the United States have had a long, warm relationship, forged in what were for many, desperate circumstances.