Japanese visitors check out an A-10 Warthog among the many aircraft displays Saturday at the annual Japanese-American Friendship Festival on Yokota Air Base. (Vince Little / S&S)

Japanese visitors check out an A-10 Warthog among the many aircraft displays Saturday at the annual Japanese-American Friendship Festival on Yokota Air Base. (Vince Little / S&S) With temperatures in the mid-90s, visitors snapped up ice cream and snow cones. (Vince Little / S&S) 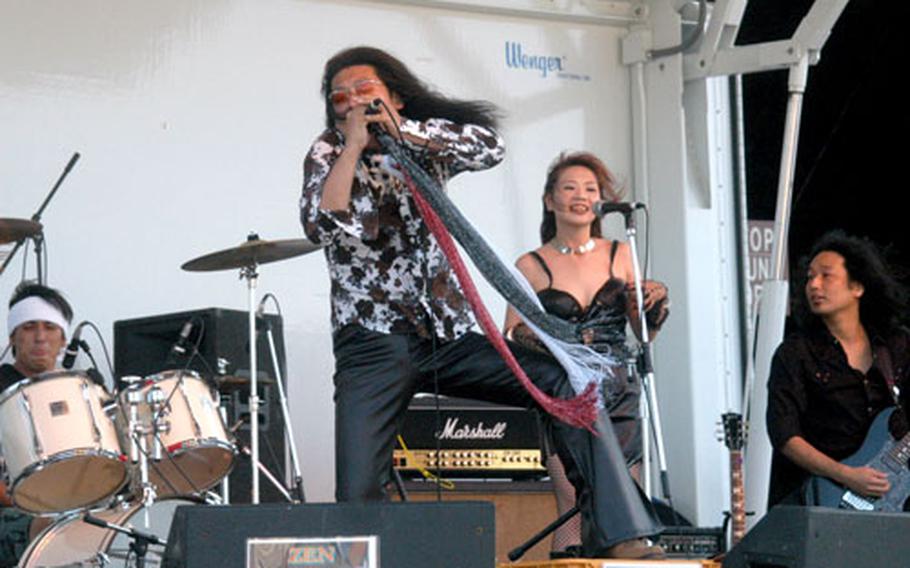 YOKOTA AIR BASE, Japan &#8212; An estimated 60,000 people poured through Yokota&#8217;s Supply Gate and onto the base flight line Saturday for the opening day of the 55th annual Japanese-American Friendship Festival.

The two-day event, scheduled to end Sunday, was expected to draw more than 100,000 visitors.

The festival&#8217;s first day was marked by aerial demonstrations, static aircraft displays, live entertainment on indoor and outdoor stages, and more than 200 booths featuring games, artists, food and concessions. It ended with a fireworks show over the Yokota runway.

The popular Yokota Strong Man Challenge, with male and female bodybuilders appearing on the outdoor stage, was among the planned highlights for Sunday afternoon.

People taking in the action Saturday &#8212; as well as those serving it up &#8212; battled humidity and temperatures that reached the mid-90s, but organizers reported no serious heat-related incidents Saturday.

Base officials made announcements all day about heat-stress conditions, warning people to stay hydrated and seek out shade. Medical facilities were set up, complete with translators, and an ambulance from a nearby Japanese hospital also was in place to handle any emergencies.

A black U-2 spy plane was among the many aviation attractions along the flight line. In the skies overhead, parachute teams &#8212; including one from the Japanese Ground Self-Defense Force&#8217;s 1st Airborne Brigade &#8212; emerged from a passing C-130. They were joined by Navy and Marine skydivers.

Attendees once again flocked to a food booth put together by the 374th Logistics Readiness Squadron for a down-home taste of the States. People stood in long lines to grab a 13-ounce steak dinner that comes with corn, chips and a drink &#8212; all for $13, or 1,300 yen.

West said they bring in portable air-conditioning units and try to rotate cooks, but grill duty in August certainly makes for a sweltering day.

Across the walkway, Steve Holowenzak, a professor at the University of Maryland branch on Yokota, occupied perhaps the most enviable spot at the festival &#8212; the 374th Maintenance Squadron&#8217;s dunking booth.

A karate exhibition and performances by the U.S. Air Force Band of the Pacific-Asia, Yokota Samurai Taiko team and Tanabata Dancers unfolded Saturday on the stage inside Hangar 15.

Several feet away in the steamy building, Karyn Soh was among a handful of volunteers working a concession booth for Cub Scout Pack 49, which sold T-shirts, patches, cookies, floats and sundaes all weekend.