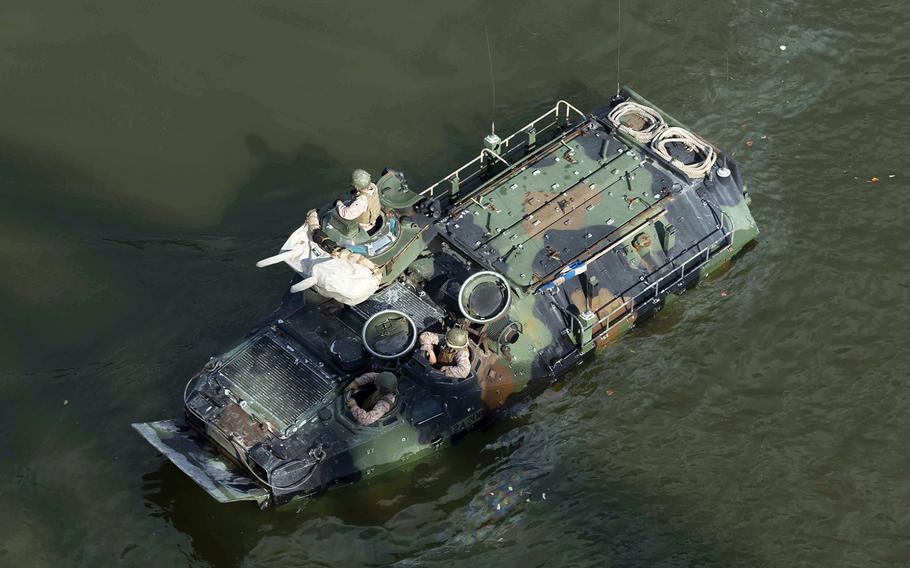 Marines with the 2nd Amphibious Assault Battalion aboard AAV-7 Amphibious Assault Vehicles during an exercise on the Cumberland River in Nashville, Tenn., on Sept. 6, 2016. The Marine Corps said Wednesday, Sept. 13, 2017, that an AAV-7 similar to this one caught fire during a training exercise at Camp Pendleton, Calif. (Jack A. E. Rigsby/U.S. Marine Corps)

Six Marines are in critical condition and another six are in serious condition after their amphibious-assault vehicle caught fire Wednesday morning while training at Camp Pendleton, the Marine Corps said.

Four Marines were sent to the University of California Irvine Medical Center, the statement said. Three of those are critical and the other is in serious condition.

One Marine has been taken to Scripps Memorial Hospital La Jolla and is in stable condition, the statement added. Two Marines are being treated at Naval Hospital Camp Pendleton with minor injuries.

It was not immediately clear what caused the fire, which happened on land, but authorities were investigating, said 1st Lt. Paul Gainey, a division spokesman. The Marines were conducting a combat readiness evaluation as part of scheduled battalion training when the incident happened about 9:33 a.m. local time.

“Our thoughts and prayers are with the Marines and their families as they receive medical care,” Gainey said.

An amphibious-assault vehicle, or AAV-7, is a 30-ton, armored vehicle designed to carry Marines and their equipment from Navy amphibious-assault ships onto land and into combat. The tracked vehicles, known to Marines as “amtracks,” feature a large boat hull-shaped front end that helps them maneuver through water. They can carry up to 28 Marines at a time.