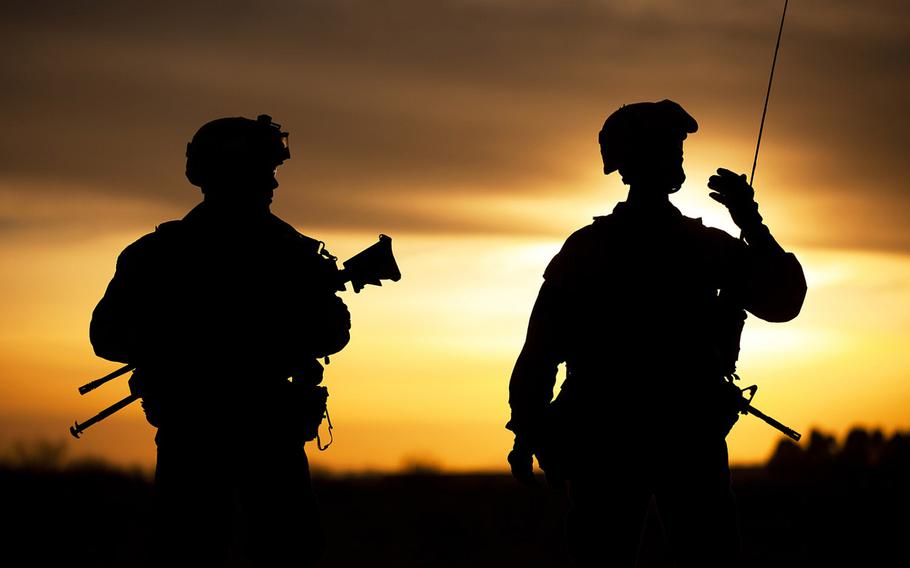 KABUL, Afghanistan — Six U.S. troops were killed Monday when a suicide bomber on a motorcycle plowed into a foot patrol near a major U.S. air base in Afghanistan, local officials and media reported.

Two U.S. servicemembers and one Afghan were wounded, The Associated Press and NBC news reported.

The NATO-led coalition would not confirm the identities of those killed, but Abdul Shukor Qudoosi, governor of the district where the base is located, said all six were American. The Washington Post and the Reuters news agency each quoted a U.S. official as confirming they were U.S. servicemembers.

“As I saw firsthand during my visit to Afghanistan last Friday, our troops are working diligently alongside our Afghan partners to build a brighter future for the Afghan people,” Secretary of Defense Ash Carter said in a statement. “Their dedicated efforts will continue despite this tragic event. Our deepest sympathies go out to the families of these brave Americans who died in service to this vital mission, and our thoughts remain with all of our troops serving overseas during this holiday season so that we may have peace and security at home.”

It was the biggest single loss of life due to hostile fire suffered by the U.S. military since the end of the NATO combat mission last year. Six U.S. airmen and five civilian contractors were killed in October when a C-130 crashed in Jalalabad, but U.S. officials said hostile fire was not believed involved.

The attack happened around 1 p.m. when the attacker targeted a joint patrol of coalition troops and Afghan National Police officers in Parwan province near Bagram Air Field, Qudoosi said. He said three foreign troops and three Afghan policemen were also wounded in the attack.

Resolute Support, as the international military coalition in Afghanistan is known, confirmed that six of its troops had been killed in a "vehicle-borne improvised explosive device attack" near the base.

"On behalf of Gen. (John) Campbell and all of Resolute Support, our heartfelt sympathies go out to the family and friends of those affected by this tragic incident, especially during the holiday season," Resolute Support spokesman Brig. Gen. Wilson Shoffner said in a statement.

The Taliban, who often exaggerate the effect of their attacks, quickly released a statement claiming responsibility for the attack, confirming the details of what happened. It claimed that 19 troops were killed.

Bagram Air Field, just north of the Afghan capital, Kabul, is the main hub for the roughly 10,000 American troops who remain in Afghanistan.

The attack comes as worries increase about the Taliban taking control of Helmand province, an opium-rich insurgent stronghold in southern Afghanistan that has been the deadliest province for foreign troops during the 14-year war. A Pentagon report released last week found that security is deteriorating in Afghanistan, with the Taliban still a potent threat and Islamic State militants gaining strength.

Coalition deaths have dropped significantly as foreign forces in the country have withdrawn troops and focused more on training the Afghan security forces, who have taken over most of the day-to-day fighting. While foreign troops are involved in far fewer combat missions, they still conduct force protection patrols around NATO military bases.