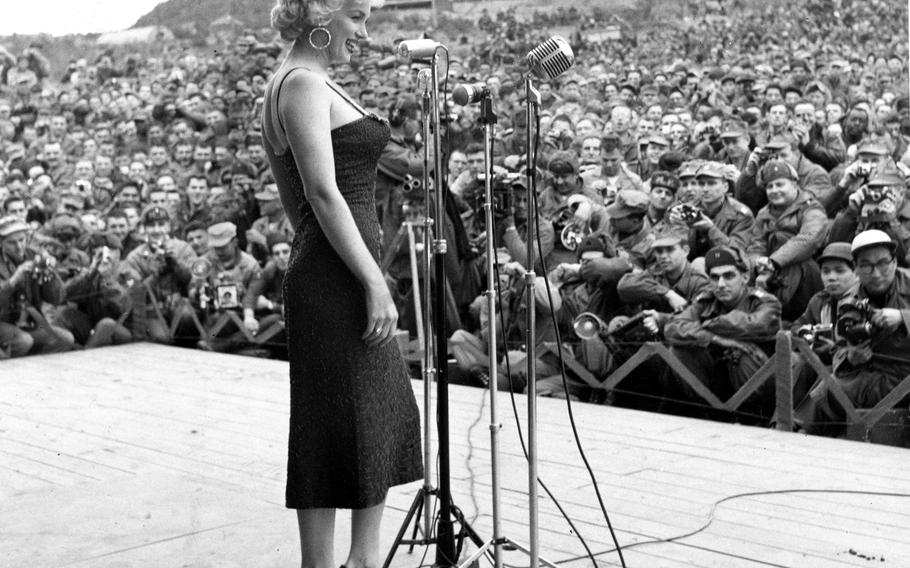 WITH U.S. 45TH DIV., Korea, Feb. 19 (Pac. S&S) Veteran trooper Marilyn Monroe, who has steamed over more than 200 miles of the snow-splotched

Korean front in the past three days, last night wound up her tour of Eighth Army units with an unrehearsed stampede at the Thunderbird Division.

Forty-fifth soldiers, who had been waiting for the hip-waggling femme fatale for several hours in one degree below zero weather, stormed through the MP-guarded rope and steel barriers, tossed rocks on stage and forced the Special Services show to skip one of its numbers and get Marilyn on stage before things got too far out of hand.

One soldier was carted off in an ambulance, a casualty of the unexpected demonstration.

The Mob of 6,000 surged forth like a human tidal wave as the performance went into chaos and confusion.

Restless and irritable, the crowd trampled around in uncontrollable fashion, forcing the fabulous form to forsake her post-performance for the shutter-bugs and dash off to her quarters in the general’s sedan.

She is scheduled to tour the 45th Div area early today in an open jeep before proceeding to K-47 for her first Air Force performance.

Escorted by Brig. Gen. John C. Oakes, acting division commander, Miss Monroe took an extended tour of the 35th Regt., 90th FA and the 27th Regt., stopping en route to speak with the thousands of Yanks who had dotted the road for hours to see her, but primarily to snap her picture.

Later, at the 2nd Div. Marilyn was greeted. by Maj. Gen. William Barriger before going to the enlisted men's mess for the first non-steak meal she had on the front, other than yesterday’s breakfast at the 25th when she ate four fried eggs.

Marilyn picked up a steel tray, washed it in a pot of boiling water, fell in behind other troops and took portions of everything to help gain back the ten pounds she had lost on her Far Eastern junket.

As she left the Mess for the chopper, she called for escort Knapp, "Corporal, where are you, I can't keep track of you." A burly white-tassled, gun-slinging shape rallied with a "That works both ways, ma'm."

Following an early afternoon performance at K-47 to the boys in blue, her first Fifth Air Force show, she will do a farewell act near Taegu before departing for Tokyo to continue her honeymoon.