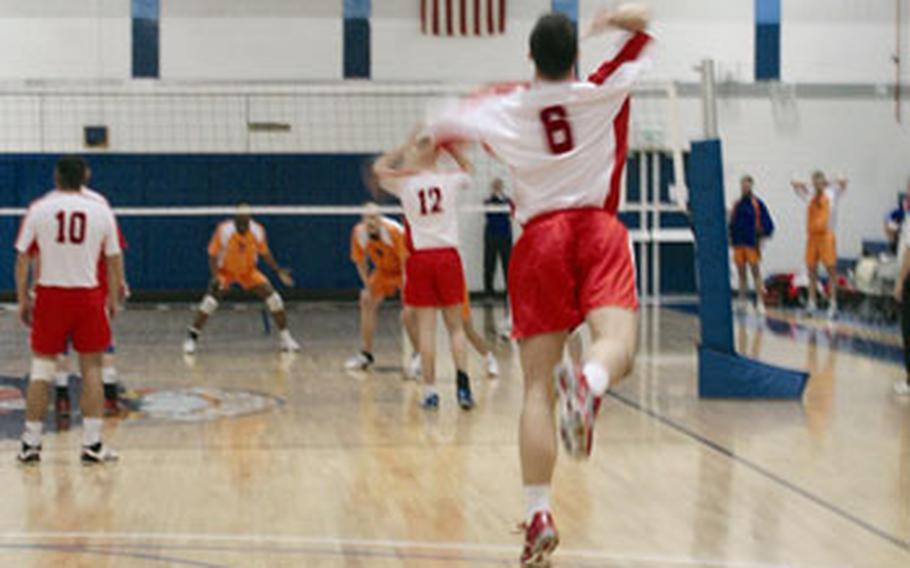 Buy Photo
A member of the Polish men’s volleyball team serves during the men’s championship match against the Dutch in the 5th Allied Air Component Command tournament last week at RAF Lakenheath. The Dutch won and claimed the men’s title. (Charlie Reed/Stars and Stripes)

RAF LAKENHEATH &#8212; Air force teams from countries across Europe battled it out on the volleyball courts here last week with the U.S. women&#8217;s team taking home the gold.

Sponsored by the NATO 5th Allied Air Component Command in Germany, the long-standing competition is about more than winning, say organizers.

With tournaments in various sports taking place throughout the year, the goal of the league is to foster camaraderie &#8212; along with a little friendly competition &#8212; among airmen, said 2nd Lt. Erik Uudevald, a member of the Estonian air force and the international athletic board that oversees the annual contests.

"It&#8217;s the way air force personnel can come together to get to know each other a little bit and compete," Uudevald said. "It&#8217;s a way for colleagues to talk, because most of the time it&#8217;s only the high-ranking officers who meet."

The U.S. men&#8217;s team just missed the finals, placing third out of seven teams. Countries represented in the competition included the Netherlands, Poland, Belgium, Germany, Estonia and the United Kingdom along with the United States.

The Dutch men defeated Poland in the men&#8217;s final, while the American women beat the Germans in a close match that went five games. Spectators roared as the final game of the match went back and forth until the U.S. wrapped it up.

"I&#8217;m a sit-down coach, but I couldn&#8217;t help standing up by the end," said coach Lani Kekahuna, a civilian employee at Ramstein Air Base, Germany.

The U.S. women&#8217;s team consisted of 13 players from bases throughout Europe, Asia and the U.S. Because the team had never played together, practice was intense leading up to the competition, Kekahuna said.

"We practiced eight hours a day for four days," she said. "But our players come on the team in shape, so it&#8217;s just a matter of them learning to trust each other on the court."

The key to winning consistently throughout the three-day tournament came down to passing, she said.

"When we pass, nobody can stop us," she said.