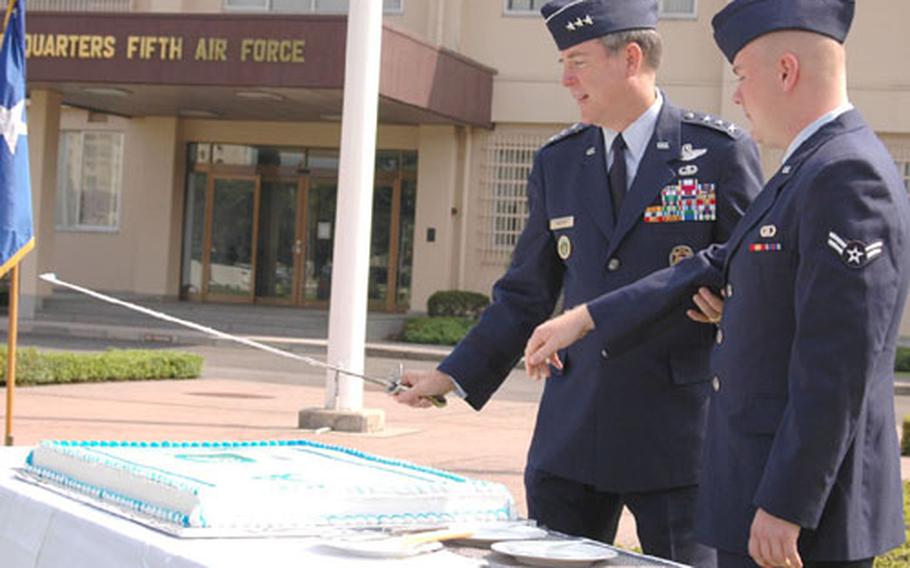 Lt. Gen. Thomas Waskow, left, commander of the 5th Air Force and U.S. Forces Japan, and Airman 1st Class Phillip Haynes of the 20th Operational Weather Squadron take part in the cake-cutting ceremony Friday morning at Yokota Air Base, Japan, which traditionally includes the youngest and most senior airmen present. The event marked the Air Force&#39;s 57th birthday and 63rd anniversary of the 5th Air Force as a numbered unit. (Courtesy of USAF)

On the lawn in front of its headquarters, with the Pacific Air Forces band and Yokota Honor Guard setting the scene, officials marked a pair of upcoming anniversaries: the Air Force&#8217;s 57th birthday and the 5th Air Force&#8217;s 63rd anniversary as a numbered entity.

&#8220;It&#8217;s no coincidence that the Air Force gained its independence from the Army so soon after the end of World War II,&#8221; he said. &#8220;That global conflict underscored the importance of air power and significantly determined success in Europe and the Pacific.&#8221;

Waskow said it&#8217;s just as critical today, with the United States engaged in a worldwide war on terrorism.

&#8220;This [war on terror] actually began several years back, but had its most infamous moment almost exactly three years ago,&#8221; he added, referring to the anniversary of the Sept. 11, 2001, terror attacks in the United States.

&#8220;The images that accompany it remind us that air power is a deadly force that can be used for evil as well as for good.&#8221;

He praised the performances of airmen from Misawa Air Base, Japan, and Kadena Air Base, Okinawa, during Operation Iraqi Freedom and said the Air Force should continue acting as a beacon of innovation in technology and change.

&#8220;New national security realities have forced us to redefine our enemies, as well as our concept of defense,&#8221; Waskow said. &#8220;All the new and exciting things we do here at 5th, and across the Air Force, underscore the necessity of transforming our military capabilities and posture. And we will do that.

&#8220;Transformation is about developing capabilities and exploring new concepts of operations that allow us to meet whatever challenges come our way.&#8221;

Waskow, with 38 years of service, joined Airman 1st Class Phillip Haynes of the 20th Operational Weather Squadron &#8212; who&#8217;s been in for nine months and 28 days &#8212; in the traditional cake-cutting ceremony. Traditionally, that duty falls to the youngest and most senior Air Force member present.

The 5th Air Force, which has been based at 23 different locations since its inception Sept. 20, 1941, is one of the few that&#8217;s never had a headquarters in the United States, officials said. It was once called the Far East Air Force and remains the service&#8217;s most decorated numbered organization.