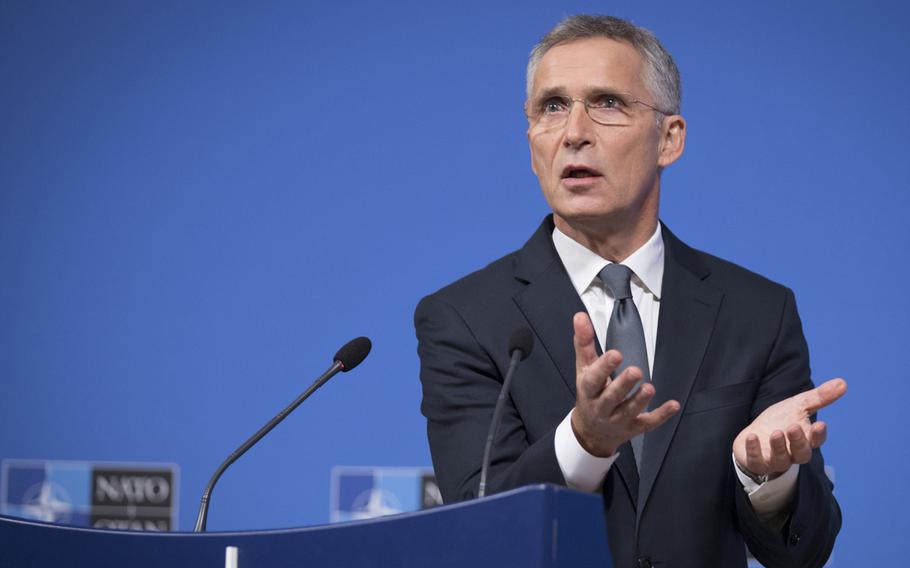 STUTTGART, Germany — NATO will require members to protect civilian telecommunication systems, including fifth-generation services, and ensure they function in wartime, the alliance’s secretary-general said ahead of a two-day meeting of defense ministers in Brussels.

All NATO allies will be required “to have reliable telecommunications systems in peacetime, crisis and conflict,” NATO Secretary-General Jens Stoltenberg said Wednesday.

The U.S. has been pressuring allies to take a tougher stance on China and resist deals with Beijing on 5G technology. Washington sees telecommunications giant Huawei, which is a key player in high-speed 5G equipment, as an arm of the Chinese government. The concern is that China could use the network to spy on communication traffic.

While Stoltenberg did not specifically name China as the main threat or the cause of new NATO measures, in an earlier news conference he said ensuring the security of communication networks is a “national responsibility.”

Defense ministers, including U.S. Defense Secretary Mark Esper, also will discuss Syria at a time of tensions for the alliance, particularly over the incursion into Syria by NATO member Turkey and the partnership Ankara is building with the alliance’s historic adversary, Russia.

Stoltenberg and U.S. Ambassador to NATO Kay Bailey Hutchison said it is too early to tell whether the arrangement between Turkey and Russia will improve security in Syria. “We need to be very watchful to see if Russia can play a constructive role,” Hutchison said.

German Defense Minister Annegret Kramp-Karrenbauer’s proposal for Europe to cooperate with Russia and Turkey to set up an international security zone in Syria will also be discussed.

“I welcome that NATO allies have proposals on how to move forward,” Stoltenberg said. “We need a political solution.”

The alliance’s baseline requirement for telecommunication security is expected to be updated at the gathering, requiring allies to put in place “robust” options to restore systems in case of a disruption or outages, and to prioritize network access for national authorities during a crisis, Stoltenberg said.

The “consequences of foreign ownership, control or direct investment” must be examined by NATO members, he said. “I expect ministers will agree to take these requirements into account when taking national decisions on designing, building and operating their telecommunications networks.”

Also on the defense ministers’ agenda are the war in Afghanistan, defense spending levels among allies, and ongoing efforts at reinforcing NATO’s eastern and southern flanks.