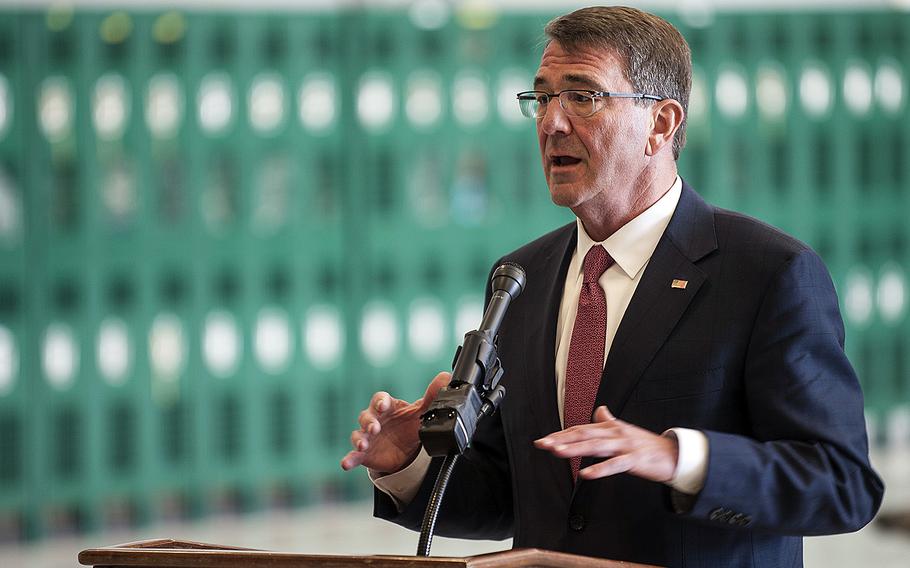 WASHINGTON — Secretary of Defense Ash Carter on Tuesday submitted a proposed $583 billion Defense Department budget for 2017 that focuses more on high-tech future conflicts and less on counterterrorism operations against militants such as the Islamic State group.

The request is the last from President Barack Obama’s administration, and includes a $524 billion base budget and a separate wartime spending account of $59 billion. The 2017 DOD budget request is slightly less than 2016’s $585.3 billion proposal.

The Pentagon proposal puts more focus on emerging threats, including intensified military activities by Russia, which invaded Crimea in 2014 and launched unannounced ship-based missiles into Syria last year. It addresses increased tensions with China, which has aggressively hacked U.S. computer networks and continues its buildup of man-made islands in the South China Sea. The budget also targets North Korea, which further aggravated tension on the Korean Peninsula this weekend with a ballistic missile test launch.

The fiscal year 2017 budget “reflects recent strategic threats that have taken place in Asia, the Middle East, and Europe,” the Pentagon said in a statement accompanying the documents released Tuesday.

Counterterrorism operations also drive the 2017 budget, with $200 million requested for operations in Africa to counter the rising influence of the Islamic State group and other terror groups there.

Carter’s budget priorities target what he calls “full spectrum” threats – where the battleground for U.S. forces stretches from the bottom of the ocean to cyberspace, involving networked heavy armor, ships and aircraft, and differs from the ground counterinsurgency operations that have dominated the last decade.

Carter used a visit last week to the West Coast to highlight the additional funding he seeks for DOD’s research labs, which are busy modifying future missiles, satellites and global positioning system defenses. His trip also focused on the U.S. fleet of ships and next-generation fighter jets.

“The U.S. military will fight very differently in coming years than we have in Iraq and Afghanistan or in the rest of the world’s recent memory,” Carter said last week as he previewed the 2017 budget. “We will be prepared for a high-end enemy.”

However, the DOD’s spending proposal will face resistance from Republicans in Congress.

On Thursday, the chairmen of the Republican-controlled House and Senate budget committees released a joint statement to un-invite Shaun Donovan, the White House director of the Office of Management and Budget, from testifying about Obama’s overall 2017 budget.

“Rather than spend time on a proposal that … will double down on the same failed policies that have led to the worst economic recovery in modern times, Congress should continue our work on building a budget that balances and that will foster a healthy economy,” they said last week in a joint statement.

The DOD portion of the budget request is usually treated separately from ongoing war operations. Pentagon leadership will address the House and Senate Armed Services committees this week about its request.

Long Range Strike Bomber: A stealth bomber known as “B-3” receives $1.4 billion for engineering and development.

Two F/A-18E Super Hornets are planned for 2017 and 14 more through 2021 to cover what Navy and Marine Corps officials have warned is an upcoming fighter gap.

Arleigh Burke-class destroyers: Two Flight III ships, which have the newest Aegis missile defense capability are planned for 2017 with a total of 10 in the 2017-2022 budget plan. Carter is also planning to modernize the Aegis firing systems on 12 older destroyers.

Drones: The Pentagon plans to increase spending to get the number of simultaneous combat patrols the Air Force can support from about 60 to 90 by 2020.

Military and DOD civilian personnel would get a 1.6 percent pay raise.

$3.4 billion to station another brigade of troops and equipment in Europe to bolster defenses against Russia.

$7.5 billion to continue operations against the Islamic State and other terror groups. The fund includes $1.8 billion to replenish 45,000 bombs for the Air Force, which has dropped more than 35,000 munitions against the Islamic State since Operation Inherent Resolve began in August 2014. $200 million would be set aside to address growing threats in Africa.

The Navy will go from 52 planned littoral combat ships to 40, resulting in about $8 billion in savings, Carter said.

The Pentagon proposes another round of base closures, a request that has been repeatedly rejected by House and Senate leaders.

Air Force variant of the Joint Strike Fighter: Five jets are cut from the Air Force’s planned buy over the next five years.

Delayed purchase of Marines’ Joint Light Tactical Vehicle, which is planned to replace the Humvee.