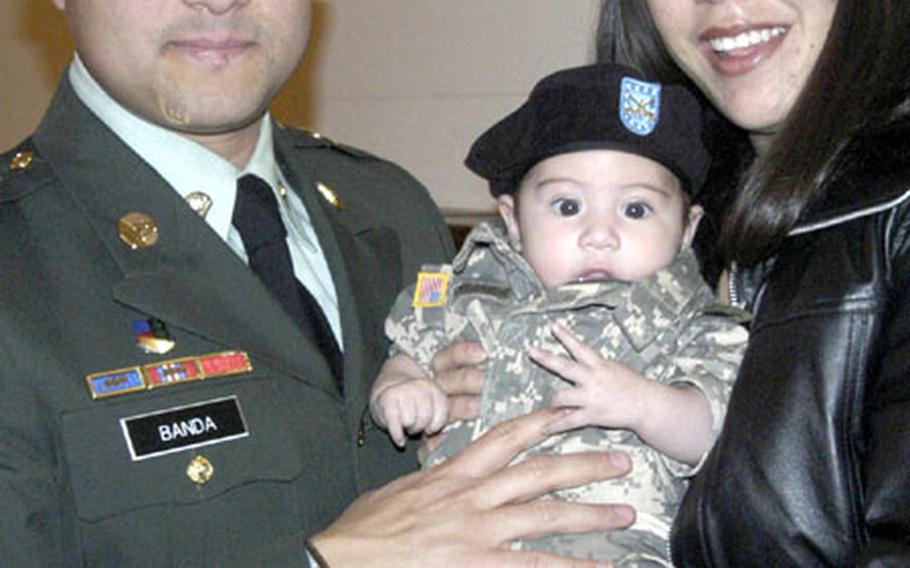 HEIDELBERG, Germany &#8212; They came from Cuba, Guatemala, Mexico and the Philippines. They came from Ghana, Micronesia, Albania and &#8230; Canada, Great Britain and Egypt?

Nearly 60 U.S. soldiers, stationed throughout U.S. Army Europe but originally from all parts of the globe, gathered Tuesday at Campbell Barracks to take the oath renouncing allegiance to &#8220;any foreign prince, potentate, state or sovereignty&#8221; and become U.S. citizens.

Zaki raised his right hand and took the Oath of Allegiance, which dates from 1929, in the Casablanca room next to the base food court, along with Spc. Hector Banda. Banda, 30, and from Mexico, had been waiting to be a U.S. citizen &#8220;pretty much his whole life,&#8221; his wife said.

Banda, like nearly all the other new citizens, wore his Class A uniform. But his wife, Melissa, wore a flounced camouflage skirt and their baby, 2-month-old Ethan, wore a miniature battle dress uniform to mark the day.

The group ceremony was due, in part, to a change last year in immigration law. The change did away with a five-year waiting period for active-duty military members. The new rules say that during a time of war, foreign-born soldiers, airmen, sailors and Marines may apply for citizenship on their first day of active duty, said Jeffrey Sapko, officer in charge of the U.S. Citizenship and Immigration Services office in Frankfurt.

If all goes well, it takes about six months from application to oath-swearing, Sapko said.

Since the law changed, the number of applicants has been increasing rapidly. Last fiscal year at his office, Sapko said, 252 servicemembers became U.S. citizens. With the new fiscal year only a few weeks old, &#8220;We&#8217;re already halfway to what we did last year,&#8221; he said.

The ceremony was at Campbell Barracks because about 70 percent of his office&#8217;s business has to do with military members, and because when possible the idea is to gather groups of new citizens together to give the occasion extra meaning and power, Sapko said. But, &#8220;Often we&#8217;ll have a soldier being deployed and we&#8217;ll administer the oath right there on the spot,&#8221; he said.

Although foreign-born soldiers have served with American forces since the Revolution, it&#8217;s unclear whether the 2004 immigration law rewarding them with quick citizenship is unprecedented, Sapko said. But it is clear that one thing citizens are required to do, according to the allegiance oath &#8212; &#8220;bear arms on behalf of the United States&#8221; &#8212; Tuesday&#8217;s citizens already have done.

Millions of immigrants from all over the world have sought U.S. citizenship for more than a century, Col. Michael Neveu, USAREUR judge advocate and a descendant of immigrants, noted during the ceremony. &#8220;The desire and intent is to better your lives &#8230; that you see some hope and some opportunity &#8230;,&#8221; he said.

That was the case for Spc. Aliaksei Kavalevski, formerly of the Republic of Belarus.

But there was also a former Canadian citizen &#8212; who said she became a U.S. citizen in part to become eligible to be an officer in the U.S. Army &#8212; and a soldier who hailed from Great Britain.