574th Supply and Services Co. back in Mannheim after a year in Iraq 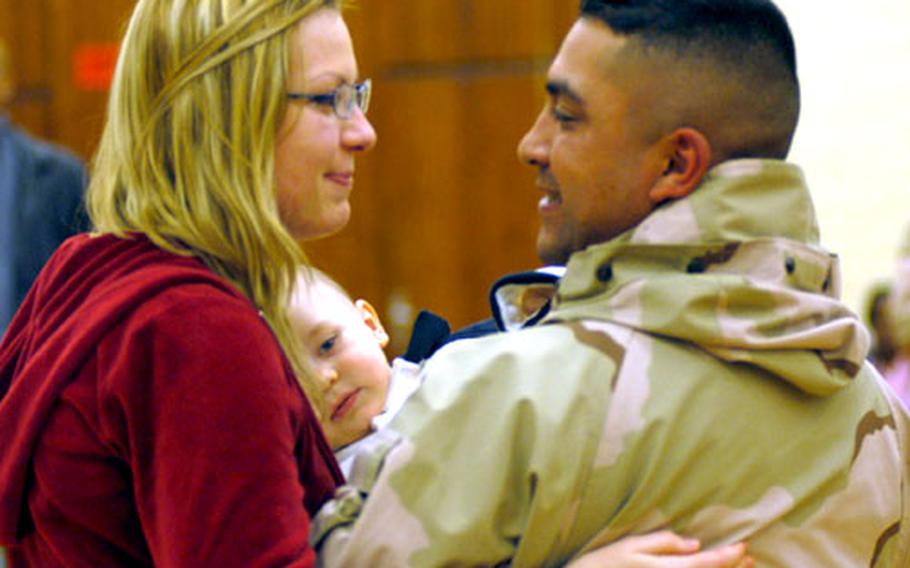 Sgt. Jose Sapien, of the 574th Supply and Services Company, greets his wife, Martina, and son, Damian, at the Mannheim military community sports area Tuesday night after a year of deployment in Iraq. (Ben Murray / S&S)

Sgt. Jose Sapien, of the 574th Supply and Services Company, greets his wife, Martina, and son, Damian, at the Mannheim military community sports area Tuesday night after a year of deployment in Iraq. (Ben Murray / S&S) 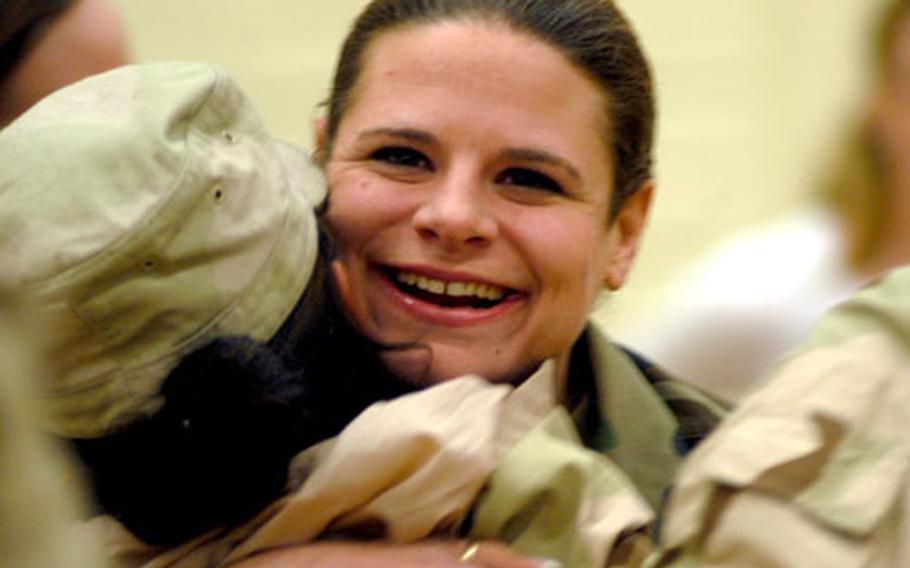 Spc. Alison Miller, from the 574th Supply and Services Company, hugs a friend at a welcoming ceremony Tuesday night in Mannheim, Germany, where the unit returned home after a year in Iraq. Miller had come home just ahead of her fellow soldiers, and greeted them at Tuesday’s event. (Ben Murray / S&S)

MANNHEIM, Germany &#8212; Members of the supply company whose motto is &#8220;Warriors, mount up,&#8221; were finally able to let go of the reins and dismount Tuesday, as the 574th Supply and Services Company returned to Mannheim after a year in Iraq.

More than 80 of the troops deployed with the unit marched into the Mannheim military community&#8217;s sports arena at about 8 p.m. to the cheers of family members and loved ones.

Many said they were nervous with anticipation about finally having their soldiers home from the war.

For the Apodaca family, the return of the company will be a chance for a father to finally get to know the son born just before the troops left Jan. 8, Veronica said.

Just down the bleachers, another son waited for his father. First Sgt. Larry Tulk arrived just in time to celebrate his 40th birthday on Wednesday.

Company commander Capt. Natalie Rolling-Edlebeck, said she was extremely proud of her troops&#8217; performance in Iraq, where they had the perilous duty of running convoys in the region surrounding Logistics Support Area Anaconda north of Baghdad.

Spread out at four different bases in the Sunni Triangle &#8212; the volatile region between Tikrit, Ramadi and Baghdad &#8212; the unit transported more than 80 million gallons of fuel and &#8220;produced, transported and distributed&#8221; more than 200 million gallons of water over the past year, all without losing a soldier, Rolling-Edlebeck said.

Eleven more members of the 574th are still on their way home from downrange, accompanying the unit&#8217;s equipment, a rear detachment spokeswoman said Tuesday. At full strength, the 574th includes 125 troops and 40 vehicles.

For warriors returning Tuesday, the coming days will bring late holiday celebrations and family time, some said, while others will soon be on the road again. At least two spouses said they had plans to take rest-and-recuperation leave in Hawaii with their soldiers in the coming weeks.

Rolling-Edlebeck&#8217;s son, Benji, 8, said the family had some gifts waiting under the tree at home for his mom, one of which was the boot-shining kit he got for her.

Her husband, Marc Edlebeck, said the wait for his wife has included a lot of anxiety, but now with her home he was more worried about having to take orders around the house again.