57 years after he died in the Korean War, lost Marine comes home for burial 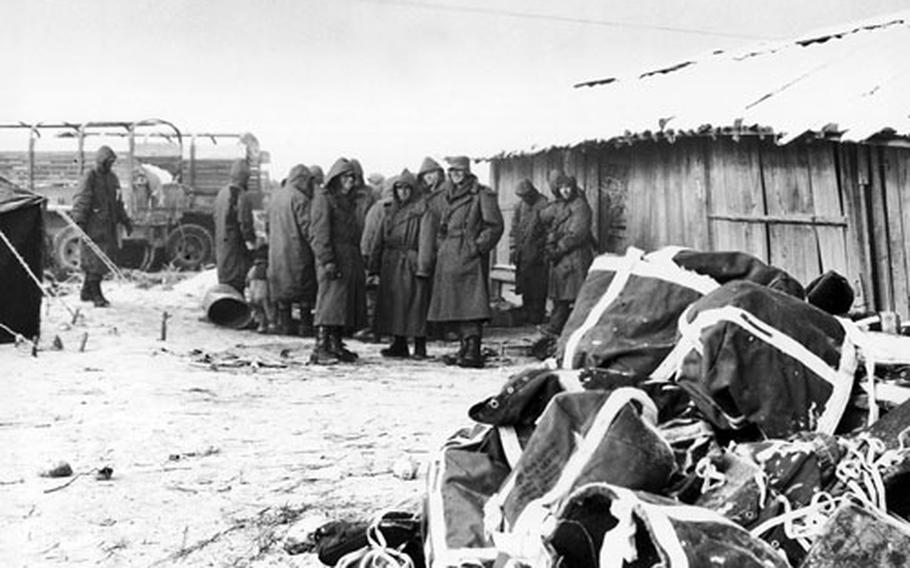 Members of the 1st Marine Division warm themselves at a fire at Advanced Airstrip Hagaruri near the Chosin Reservoir in December 1950 during the Korean War. Marine Pfc. Domenico “Nick” DiSalvo was last seen on Dec. 2, 1950, during a fierce battle at the Chosin Reservoir, as Chinese communists overran his unit from the front, back and middle. His remains recently were identified and he was to be buried with full military honors in Ohio on Thursday, on his 77th birthday. (File photo)

Sally Pier was 15 years old when she said goodbye to her older brother at a train station in Ohio, with a hug, a kiss and a promise to write.

She was 72 when she finally welcomed him home.

On Wednesday, she trembled while watching the plane that carried his cardboard-wrapped coffin land in Ohio, bringing him home 57 years after he was killed in the Korean War.

His family, who lived near Akron, Ohio, didn&#8217;t learn what happened to the Marine until earlier this year, when someone from the Joint POW/MIA Accounting Command called Pier and told her they had identified his remains, which had been buried first in North Korea, and then Hawaii.

For years, his two oldest sisters went to 6 a.m. Mass daily to pray for him, while Pier&#8217;s parents wrote letters to the Red Cross and military officials in hopes of finding out where DiSalvo might be. His fiancee eventually gave up hope that he would return and married someone else. Pier forever refused to watch war movies like &#8220;Saving Private Ryan,&#8221; because they made her think about the painful torture or death her brother might have faced.

The U.S. government declared Nick legally dead in 1953. The years passed, and his parents and two of his five sisters died, never knowing what happened or where he was.

His family read about a Chinese ship that sank, possibly drowning a cargo of American prisoners, and speculated that he might have been lost at sea. They wondered if he had settled in North Korea, and maybe started a family, or had amnesia and forgot about his family in the United States.

&#8220;There were different things we were afraid of, what could have happened to him. In my heart, I always thought he was gone,&#8221; Macken said during a phone interview.

What they did know was that DiSalvo was last seen during a fierce battle at the Chosin Reservoir, as Chinese communists overran his unit from the front, back and middle.

The Americans buried their dead in mass graves at the site but North Koreans later dug up the bodies and stripped them of their wallets, metal fillings and other identifying markers.

U.S. military officials eventually exhumed those bodies. DiSalvo was among them, and his body was taken to Japan. Officials were unable to identify the remains and reburied them in Honolulu&#8217;s National Memorial Cemetery of the Pacific, nicknamed the Punchbowl.

Pier said the military asked for blood samples about 20 years ago to try to identify DiSalvo&#8217;s remains, but had no luck. In August 2006, they asked Pier to send them a photo of her brother. She thought they wanted it for a memorial.

Instead, experts used it to sculpt a clay model of his face, which matched a skull they had exhumed.

&#8220;They could not believe what they saw,&#8221; Pier said. Combined with an unusual filling and healed broken arm bones that matched one of Nick&#8217;s childhood injuries, the experts were certain they had a perfect match.

A military representative called Pier in April to tell her that DiSalvo&#8217;s remains had been identified. The representative visited Pier&#8217;s home in May and told Pier that her brother had died of gunshot wounds to his face and body.

In a way, that was good news.

The representative also brought pictures of DiSalvo&#8217;s remains, but told Pier she didn&#8217;t have to look at them. But Pier is glad she did.

&#8220;I had dreams the first couple of nights of seeing these bones, and then I would see his face smiling at me and I knew he was happy that we knew,&#8221; Pier said.

DiSalvo was to be buried with full military honors in Ohio on Thursday, on what would have been his 77th birthday.