About 100 residents and their supporters Friday rally outside Fukuoka High Court in Naha, Okinawa, while waiting for a ruling of their eight-year long litigation. In 2000, 5,542 residents living in communities surrounding Kadena Air Base sued the Japanese government in an effort to halt flight operations at the air base between 7 p.m. and 7 a.m. and sought $59.5 million compensation. (Chiyomi Sumida / S&S)

About 100 residents and their supporters Friday rally outside Fukuoka High Court in Naha, Okinawa, while waiting for a ruling of their eight-year long litigation. In 2000, 5,542 residents living in communities surrounding Kadena Air Base sued the Japanese government in an effort to halt flight operations at the air base between 7 p.m. and 7 a.m. and sought $59.5 million compensation. (Chiyomi Sumida / S&S) 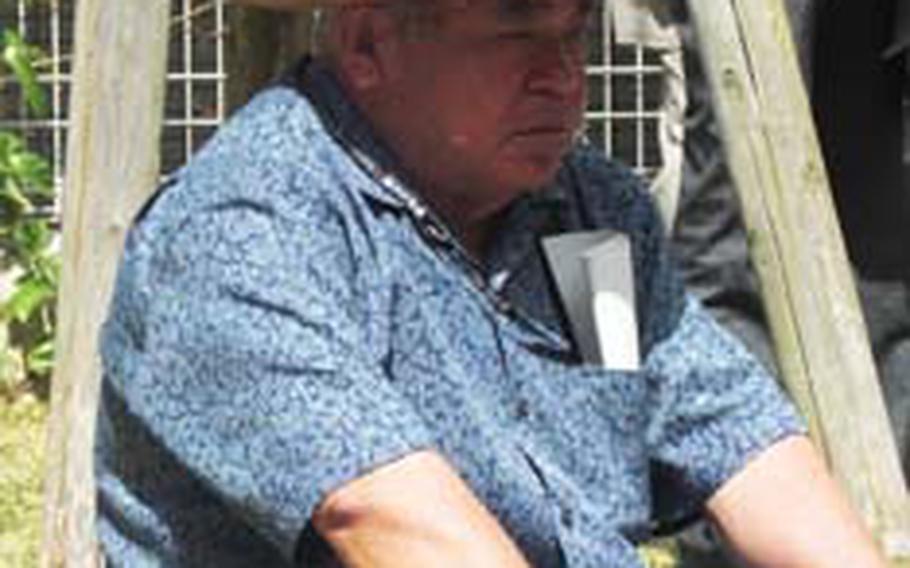 Yoshifumi Shimamura, 66, of Okinawa City Friday sits on the ground in front of Fukuoka High Court in Naha, waiting for a ruling of a suit in which he was among more than 5,500 plaintiffs. (Chiyomi Sumida / S&S)

NAHA, Okinawa &#8212; A Japanese court here Friday ordered the largest compensation award ever in an aircraft noise suit, ending an eight-year battle by neighbors of Kadena Air Base.

The Fukuoka High Court&#8217;s Naha branch awarded 5.62 billion yen (about $57 million) to 5,519 residents who claimed their health suffered from noise stemming from the air base&#8217;s activities.

However, the court dismissed the residents&#8217; demand to suspend flight activities from 7 p.m. to 7 a.m. The three-judge panel also dismissed a separate suit by 21 residents against the U.S. government.

The cases began in March 2000, when 5,542 residents sued the Japanese government, demanding $59.5 million compensation. Lower court decisions were appealed, with the case ultimately winding up in Fukuoka High Court.

During Friday&#8217;s proceedings, Chief Judge Yoshinori Kawabe said U.S. military activities at the air base are based on a bilateral pact between the governments and, therefore, are outside the control of the Japanese government.

But he said there was sufficient evidence to show the residents have long suffered from high levels of noise. The ruling Friday covered almost all the residents, including 1,661 people who were dismissed by the Naha District Court in 2005.

He turned down an argument by the Japanese government that some residents moved into the neighborhoods with full knowledge there was a noise problem.

In the ruling, the court criticized the government for not taking measures to fundamentally resolve the problem, leaving residents exposed to noise beyond permissible levels.

The ruling also questioned the effectiveness of soundproofing homes, which results in higher utility bills because the residents are forced to keep their windows closed.

Outside the court, residents and their supporters welcomed the ruling &#8212; halfway, at least. "It is a great step forward that the court recovered those who were rejected at the lower court," said Toshio Ikemiyagi, the lead lawyer for the residents. "But it is extremely regrettable that our demand to halt flight operations in the late and early hours was dismissed by the court."

Gen Maeshiro, 70, from Uruma was among about 100 residents and their supporters at a rally following the ruling.

"It was good that the court accepted most of our appeal," he said.

The Japanese government is fully aware of the gravity of the noise issue, Ro Manabe, Director of Okinawa Defense Bureau of Ministry of Defense said in a comment released following the ruling.

"We will continue to ask the military to give consideration to minimize the impacts on residents," he said. "At the same time, the government would make further effort to implement proactive measures."

Eighteenth Wing spokesman Maj. John Hutcheson declined to comment directly on the court&#8217;s decision, but said the wing has made and continues to make efforts to reduce noise, from adjusting flying schedules on Japanese holidays and school exams, to installing noise-reducing berms and sound walls around the base.

Stars and Stripes reporter Natasha Lee contributed to this story.