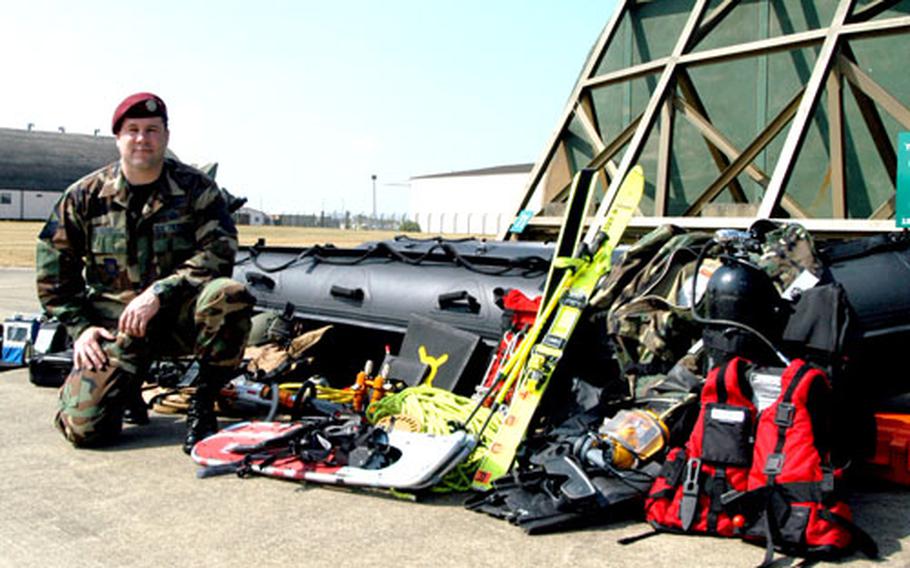 A hiker would wander off into the wilderness, and the 56th would track the wayward expeditionary down. A car would slide into a glacial crevasse, and the squadron would deploy to extricate the victims.

Today, the 29 squadron members are transitioning into their new home in the U.K. At RAF Lakenheath on Friday, the Air Force&#8217;s only European-based search-and-rescue helicopter squadron introduced itself to the British community.

Lt. Col. Steve Huss welcomed members of the British media onto the 48th Fighter Wing and provided an introductory briefing on the unit and its capabilities.

The 56th is equipped with five $14 million HH-60G Pave Hawk helicopters that have been modified from their manufactured weight of 16,825 pounds to 22,000 pounds for search-and-rescue missions, Huss said.

The helicopters have air-refueling capabilities and are called upon for disaster relief and noncombatant emergency operations &#8212; much like the Air Force&#8217;s recent participation in the evacuations from Lebanon &#8212; in addition to search-and-rescue missions.

The unit also deploys to Iraq and Afghanistan and attaches to units across the four branches of the U.S. military and of NATO allies.

Due to the inactivity of the helicopters during their transition from Iceland&#8217;s Naval Air Station Keflavik to Lakenheath, the choppers will require extensive maintenance over the next several months before the unit will be fully operational.

Once it&#8217;s up to full speed, the unit will also be ready to assist the British helicopter-based search-and-rescue team out of nearby RAF Wattisham, Huss said.

Despite the fact the 56th falls under U.S. Air Forces in Europe and the 352nd is part of the Air Force Special Operations Command, Huss said he envisions the two units conducting joint training.

Master Sgt. Ken Howk is the chief search-and-rescue operator for the 56th. This will mark his second tour in England, after having served eight years with the 321st Special Tactics Squadron based out of RAF Mildenhall.