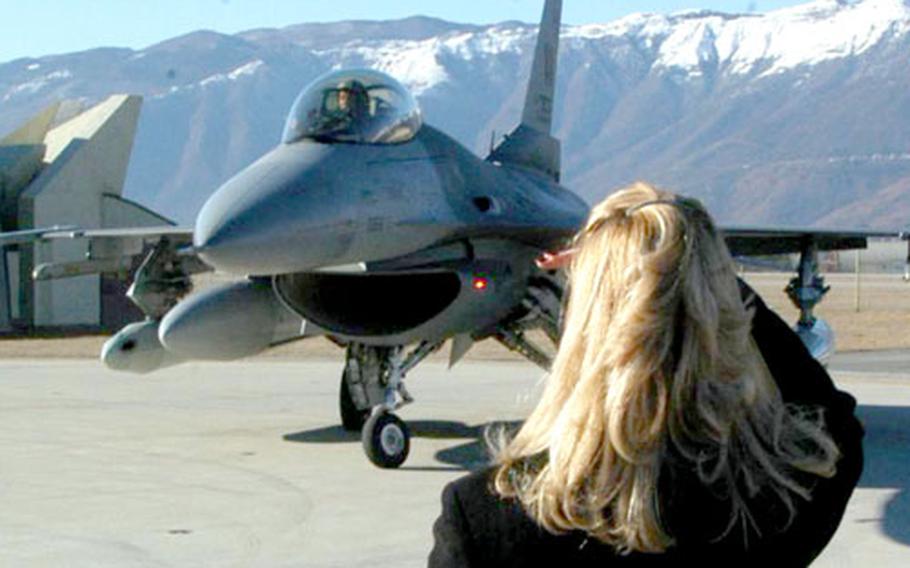 Sara Trageser waits for her husband, Capt. Scott Trageser, to maneuver his F-16 into position Tuesday at Aviano Air Base, Italy. Six pilots from the 555th Fighter Squadron flew back to their home base after spending four months over the skies of Iraq. (Kent Harris / S&S)

Sara Trageser waits for her husband, Capt. Scott Trageser, to maneuver his F-16 into position Tuesday at Aviano Air Base, Italy. Six pilots from the 555th Fighter Squadron flew back to their home base after spending four months over the skies of Iraq. (Kent Harris / S&S) 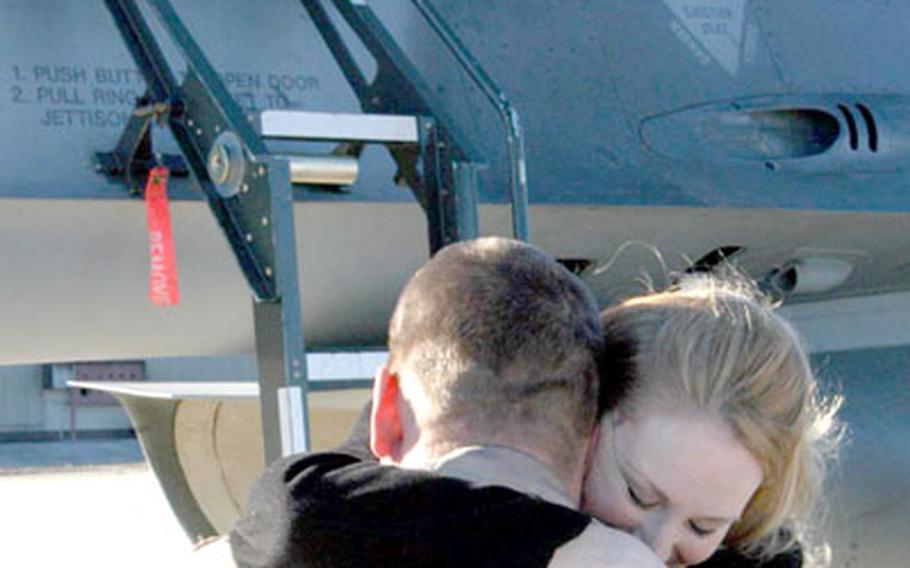 Capt. Scott Trageser embraces his wife, Sara, after climbing out of the F-16 he flew back to Aviano Air Base, Italy, on Tuesday. (Kent Harris / S&S)

AVIANO AIR BASE, Italy &#8212; A half-dozen pilots from the 555th Fighter Squadron ended a busy four months with long flights back to their home base Tuesday.

Lt. Col. Charlie Moore, the squadron commander who flew back Tuesday from Balad Air Base, Iraq, said the 555th set records for most flying hours, most sorties and most ordnance dropped in theater in an Air and Space Expeditionary Force (AEF) rotation. Pilots flew more than 1,300 sorties, provided close air support to troops on the ground and also flew reconnaissance missions.

Moore said the pilots and squadron&#8217;s support personnel were just doing their jobs.

Those families were out in force to greet them Tuesday.

About 250 airmen from the Triple Nickel are scheduled to return to Aviano this week after finishing their stints in the Air Expeditionary Force rotation 7/8. Two other squadrons at Aviano &#8212; the 510th Fighter Squadron and 603rd Air Control Squadron &#8212; participated heavily in the previous rotation. So once the remainder of the 555th returns, there will be more airmen on base than there has been for eight months.

Moore said those deployed from the squadron would get some time off before returning to their training at Aviano. The next large deployment will be in April to Zaragoza in Spain for more training.