A plume of smoke rises from the explosion of a bangalore torpedo, which 54th Engineer Battalion soldiers used to clear a barbed wire obstacle during training Tuesday at Grafenwöhr Training Area. (Rick Emert / S&S)

A plume of smoke rises from the explosion of a bangalore torpedo, which 54th Engineer Battalion soldiers used to clear a barbed wire obstacle during training Tuesday at Grafenwöhr Training Area. (Rick Emert / S&S) 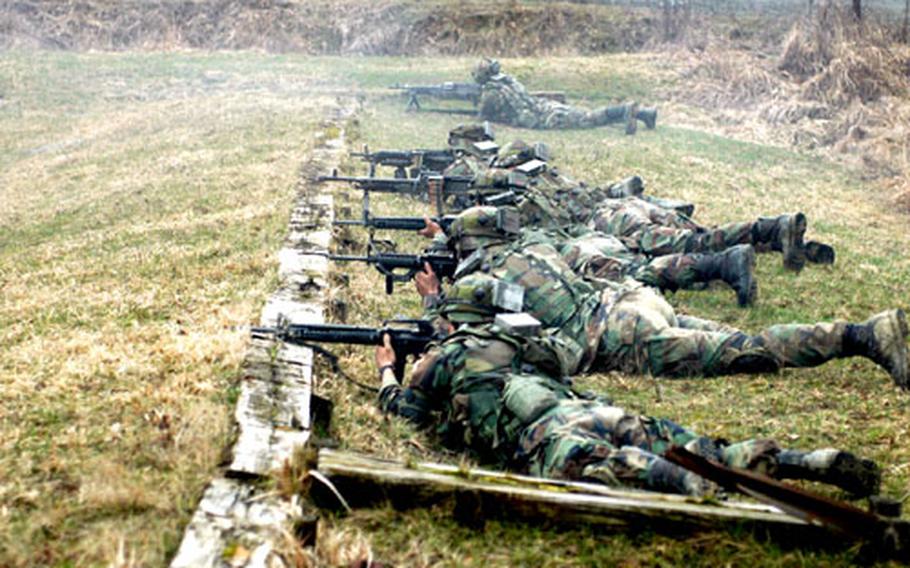 The unit, which deployed downrange for Operation Iraqi Freedom I and spent the last year in re-integration, has been blowing things up and honing combat skills in Grafenw&#246;hr since March 1.

The 30-day training was the first of four stages that the battalion will go through before deploying to Iraq in the fall, said Lt. Col. Shawn McGinley, battalion commander.

The remaining three stages will include scenario training in Bamberg this month and in Kitzingen in June. The final exercise will be a convoy live-fire from August to September back in Grafenw&#246;hr, McGinley said.

Last month, the engineers first became certified on their weapons in the gunnery portion of the training. They then worked on tasks ranging from moving mounds of earth to clearing obstacles. Individual tasks included reacting to an enemy engagement and marking a minefield.

It was the first time in about two years that many of the soldiers had gone through such extensive training, McGinley said.

&#8220;[V Corps] told us to recertify as a combat engineer battalion,&#8221; he said. &#8220;When the battalion was in OIF I, we saw a lot of combat down there. This training worked on the kinds of skills the soldiers need to prepare for what we need to be doing when we get back to Iraq.&#8221;

Most of the training was with live rounds and explosives. Only the training on the mine clearing line charge, or MICLIC, was with a training device.

The MICLIC consists of a small missile that is fired and stretches a ribbon filled with explosives across a mine-laden area. The ribbon contains about 2,000 pounds of explosives that detonate all of the mines in the area, said Maj. Tim Holman, battalion operations officer.

Training on the MICLIC, as well as on marking and breaching a minefield, hone the types of skills the engineers expect to use in combat, Holman said.

While a 30-day training exercise may not seem like the best way to spend a month, the soldiers seemed pumped to be training with real explosives and live rounds.