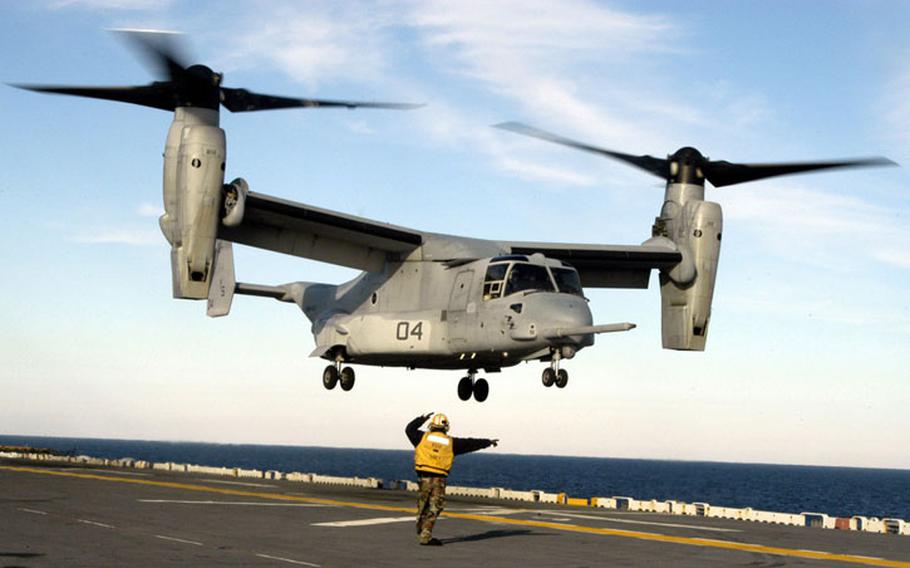 ARLINGTON, Va. &#8212; Naval Air Systems Command has grounded 46 Marine and eight Air Force V-22 Ospreys due to a computer problem, and they could remain grounded for weeks, officials said.

The MV-22 Ospreys were being grounded due to a faulty computer chip that helps allow backup controls to kick in should a Flight Control Computer malfunction, according to a Corps news release.

&#8220;Testing found that in extreme cold temperatures, the chip could fail to perform as required in this specific role,&#8221; the news release said. &#8220;Built-in test procedures in the flight control computer that are performed before flight detected the failure; this failure mode has not occurred in flight.&#8221;

Officials are now inspecting every Osprey to determine which have faulty computer chips, said James Darcy, a spokesman for the Osprey program. He estimated the majority of Ospreys have the bad computer chips, but he could not ballpark how many aircraft that translates to.

The next step is to determine whether to replace the faulty chips or make adjustments to the aircraft&#39;s computers, and that will decide how long it will take to get the Ospreys back into the air, Darcy said.

Darcy said it would be a gradual process of returning the aircraft to service, but he could not say how long that would take.

One official close to the program said the Ospreys could be grounded for a period of weeks.

The glitch does not affect plans to make the Marine Corps version of the Osprey ready this summer to be capable of deploying, Darcy said. The Air Force version of the aircraft is slated to be ready in the first quarter of 2009 to be deployed.