52 from 1st AD lead the way in Wiesbaden return 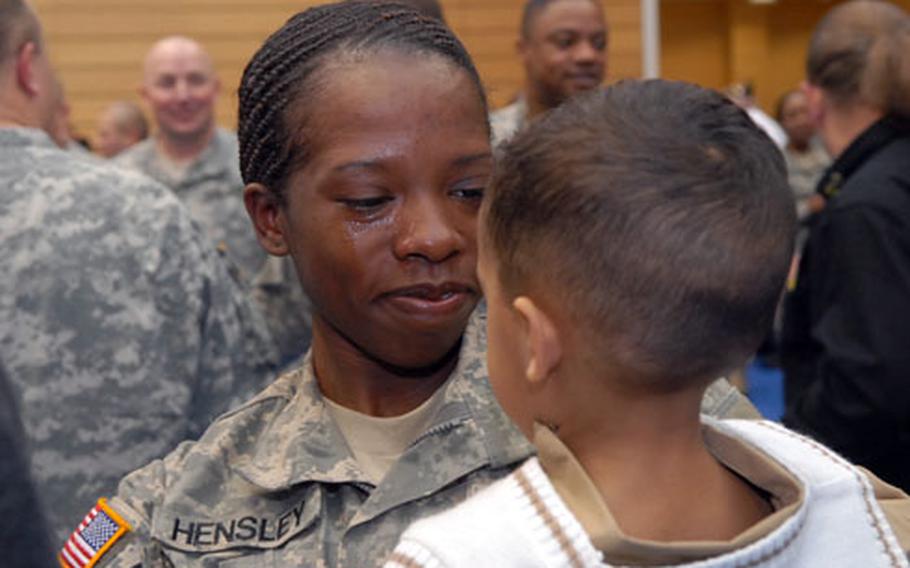 A teary-eyed Spc. Calandra Hensley gets a good look at her son Joseph, 1, after their reunion at Wiesbaden Army Airfield. Fifty-two 1st Armored Division soldiers arrived from their Iraq deployment Wednesday. (Michael Abrams/S&S)

WIESBADEN, Germany &#8212; Priming the stage for a scene that will play out many times during the next month, 52 soldiers of the 1st Armored Division&#8217;s Special Troops Battalion marched into a gym full of bellowing friends and family Wednesday, ending a nearly 14-month deployment to Iraq.

It was a small-scale version of the welcome homes to come, filled with emotion as soldiers reunited with loved ones they hadn&#8217;t seen in months.

Spc. Chris Zavaskis, a member of the battalion&#8217;s 146th Signal Company, got home "just in the nick of time," he said, gripping his wife, Amanda. She&#8217;s due in two weeks to give birth to their second daughter &#8212; an unexpected but welcome gift conceived during Zavaskis&#8217; midtour leave.

Most of the soldiers who returned alongside Zavaskis will get things up and running over the coming weeks to ease the transition for the bulk of the division headquarters, which is expected to begin streaming in by the planeload just before Thanksgiving.

"I have work to do back here," said Sgt. Derek Auguste, laughing. He was sent back early to get the office ready. There&#8217;s no real downtime for him, he said &#8212; seven days of half-day reintegration classes, then it&#8217;s back to work on day eight.

He just wanted to get down to it, he said, so when the rest of the troops get back "they&#8217;ll have less to do and they can spend time with their families."

Auguste&#8217;s own family couldn&#8217;t make the welcome-home gathering &#8212; his wife, two children and mother were all back in Florida &#8212; but his adopted "godmother," Carolyn Reynolds, was there with her husband to greet him.

The deployment had been a first for many of the returning troops, including Sgt. 1st Class Glen Davis, a 21-year Army veteran. Davis&#8217; wife, Angela, beamed as she waited for more than an hour in the gym for her husband to walk through the door.

The deployment was the longest time they&#8217;d spent apart, and until last year she&#8217;d never missed his birthday. But 14 months in Iraq broke the streak, she said.

It was hard, she said, and she cried a lot. But their children are both grown, and she knew plenty of Army couples who had gone through two or three deployments already.