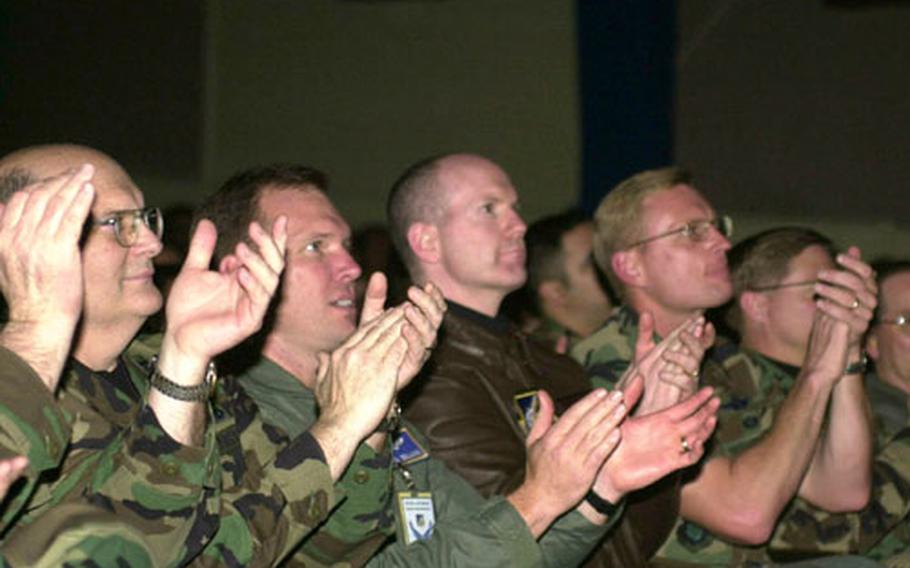 Members of U.S. Air Force&#39;s 51st Fighter Wing at Osan Air Base, South Korea, applaud Feb. 17 during outbrief at which Pacific Air Forces inspectors outline results of unit compliance inspection in which they awarded the wing an overall rating of "excellent." (Courtesy of USAF)

OSAN AIR BASE, South Korea &#8212; Taking a closer look at what they do well and what they need to improve will be the focus of an Air Force fighter wing here that received an overall rating of &#8220;excellent&#8221; in a major inspection last week.

The 51st Fighter Wing received the rating from the Pacific Air Forces inspection team that pored over the wing&#8217;s record-keeping, maintenance and other practices during a weeklong process called a unit compliance inspection, or UCI.

The inspections check whether a unit is meeting Department of Defense, U.S. Air Force and PACAF regulations, instructions, and other requirements. Possible grades were outstanding, excellent, satisfactory, unsatisfactory, or marginal.

The inspection ran Feb. 9-13 and brought some 140 inspectors to Osan, the biggest air base in South Korea. The fighter wing, known as &#8220;The Mustangs,&#8221; is the most forward-deployed, permanent wing in the Air Force, based 48 miles south of the Koreas&#8217; Demilitarized Zone.

Meanwhile, this week the 8th Fighter Wing at Kunsan Air Base on South Korea&#8217;s west coast, is undergoing its UCI.

To earn a rating of excellent, &#8220;you actually have to go above and beyond what the statutory requirements really are,&#8221; Schiavi said. &#8220;If you only comply with what is in the instructions or in the DOD guidance, you&#8217;re going to get a satisfactory.&#8221;

In coming weeks wing leadership will pore over the report, Schiavi said.

&#8220;First, we capitalize on those things that the inspector general found that were good,&#8221; Schiavi said. &#8220;The inspector general digs pretty deep &#8230; they look and there&#8217;ll be some things that they find that need some improvement &#8230; We take those and determine what actions we need to take within the wing to get ourselves back up to speed.&#8221;

The wing provides PACAF with quarterly updates on the progress of its corrective measures, Schiavi said.

Items the inspectors said need improvement include, for example, better &#8220;climate control&#8221; at a furniture storage site on base.

Among items inspectors cited as unit strengths was a &#8220;go to war&#8221; provided to newly arrived senior noncommissioned and commissioned officers to help acquaint them with the wing&#8217;s mission.