As another group waits its turn, soldiers from the 2nd Battalion, 503rd Infantry Regiment hurry toward a Black Hawk helicopter bound for the Juliet drop zone near Aviano Air Base, Italy, on Wednesday. The helicopter, assigned to Company B, 5th Battalion, 158th Aviation Regiment, stayed busy all day by making dozens of drops. (Kent Harris / S&S)

As another group waits its turn, soldiers from the 2nd Battalion, 503rd Infantry Regiment hurry toward a Black Hawk helicopter bound for the Juliet drop zone near Aviano Air Base, Italy, on Wednesday. The helicopter, assigned to Company B, 5th Battalion, 158th Aviation Regiment, stayed busy all day by making dozens of drops. (Kent Harris / S&S) 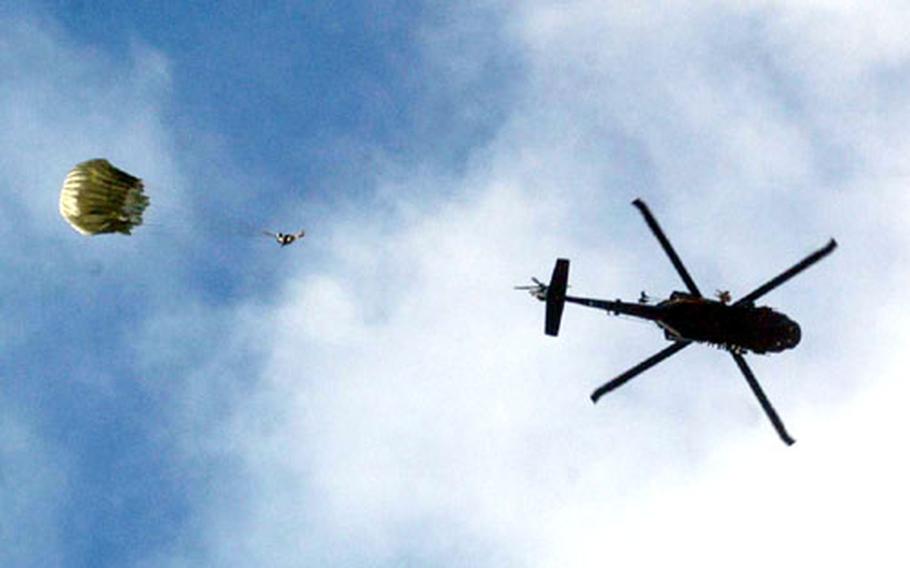 A Blackhawk helicopter from Company B, 5th Battalion, 158th Aviation Regiment starts letting out paratroopers during a series of jumps Wednesday at the Juliet drop zone. (Kent Harris / S&S) With the snow-topped Dolomite mountains in the background, paratroopers float through the air over the Juliet drop zone. (Kent Harris / S&S) 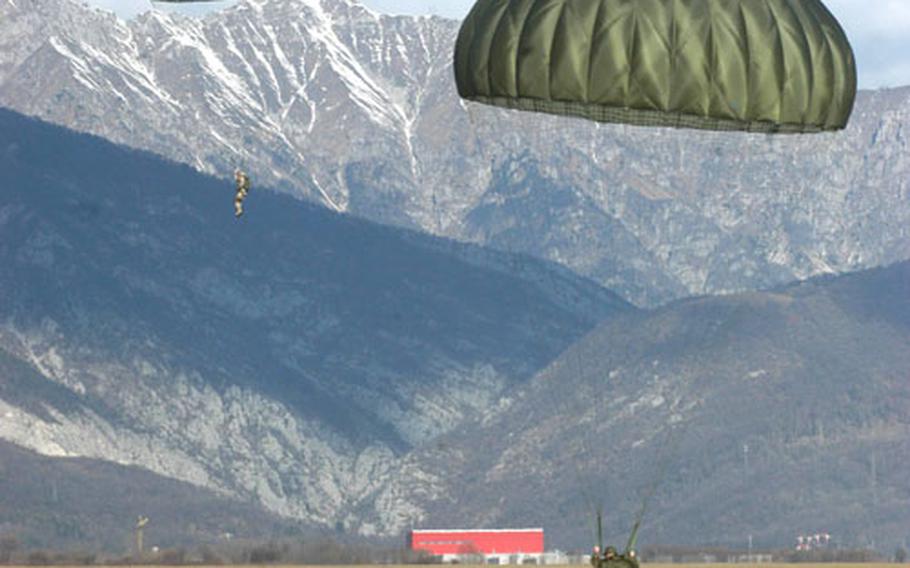 An Italian paratrooper touches down Wednesday at the Juliet drop zone while an American counterpart drifts down with the Dolomite mountain range in the background. Soldiers had clear skies and a small breeze — perfect weather for jumping. (Kent Harris / S&S)

VAJONT, Italy &#8212; It was 10 degrees below freezing when soldiers from the 2nd Battalion, 503rd Infantry Regiment gathered Wednesday morning in a vacant field.

But there&#8217;s nothing like a short ride in a UH-60 Black Hawk helicopter to warm up the blood. Especially when the way back down involves a parachute.

&#8220;That was the coolest thing I&#8217;ve ever seen,&#8221; said an onlooker watching a group of soldiers float down onto the field known as Juliet drop zone.

While spectators say it&#8217;s cool to watch, troops say its even better to actually make the jump.

By the time the 218 soldiers from the &#8220;Rock&#8221; battalion and their 53 Italian counterparts got in lines to board the helicopter that would take them skyward, the temperature had warmed up considerably.

That meant the only chill came from the often-cutting remarks from a trio of soldiers directing the jumps from a van parked near where the paratroops came down.

Though it seemed like fun, training was the priority at the drop zone, which is about 15 miles northeast of Aviano. A helicopter from Company B, 5th Battalion, 158th Aviation Regiment, based at the air base, provided the ride.

Soldiers from the Southern European Task Force (Airborne) usually jump out of C-130s to stay jump qualified. But the C-130s were busy elsewhere, and many soldiers in the unit haven&#8217;t had the chance to jump recently.

No one seemed to be complaining about the change in transportation.

&#8220;It&#8217;s a little more of a fall [from a helicopter] instead of a violent exit,&#8221; Rohling said, explaining that a fixed-wing aircraft travels a lot faster and those with parachutes are effectively sucked out rapidly.

But what about those rotor blades on the helicopter?

More than a few SETAF soldiers hadn&#8217;t jumped from a Black Hawk before. And Sergie Bomdielli, sergeant major of the Brigata Folgore &#8212; Italy&#8217;s only airborne brigade &#8212; said none of his soldiers had.

Most of the Italians participating have jumped from CH-47 Chinook helicopters the Italian military owns. In addition to the airborne troops, five Carabinieri parachutists and six Alpini (mountain troops) also were set to jump. The Italians are regular partners when the Americans jump onto Juliet.

Americans also use Italian aircraft when they jump with their counterparts in Pisa.

For the Americans, it was one of the last opportunities many of them will have to jump for a while. SETAF is set to deploy to Afghanistan in the coming months for a yearlong tour.