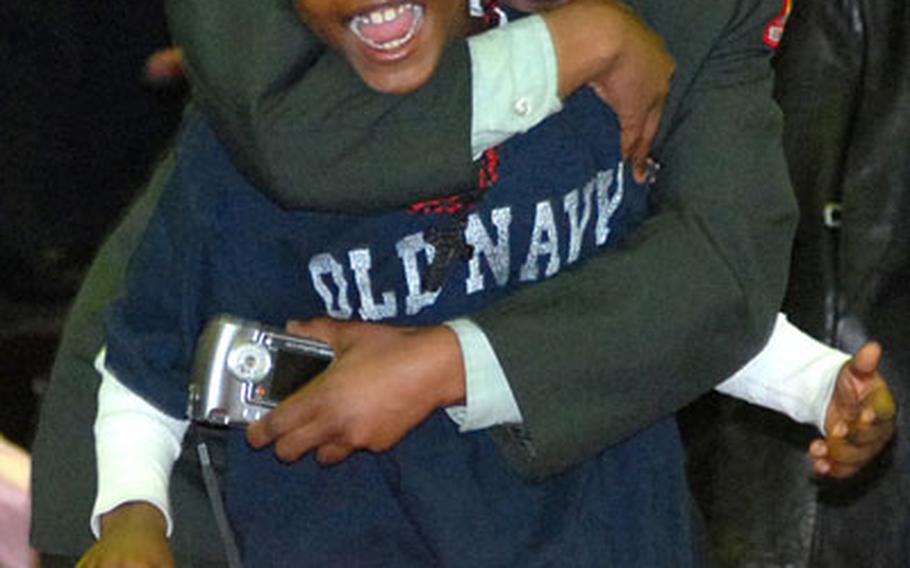 HANAU, Germany &#8212; Like other single soldiers in his unit, Spc. Bernardo Camarena headed for the exit Wednesday once the dismissal order had been given.

After a 441-day deployment, all but a fraction of it spent in Iraq, who could blame him?

He and the other single soldiers weren&#8217;t part of the unfolding scene of soldiers, spouses and children reuniting after a long and difficult separation.

So Camarena broke from the formation and followed the singles crowd toward a door in the Pioneer Casern gymnasium. But about halfway to the exit, Camarena stopped and turned around, fixing his moist eyes on the mini-reunions.

There was much to be thankful for Wednesday when about 160 soldiers returned to Hanau after such a lengthy deployment. The engineer unit didn&#8217;t lose any soldiers during the combat tour, though some were injured in roadside bombings.

As they stood outside waiting for their cue, the soldiers could easily hear the buzz inside. Though they stood at attention, some couldn&#8217;t help but smile.

One of the spouses waiting near the bleachers was Angela Mattingly, wife of Staff Sgt. Danny Mattingly. The couple&#8217;s three children were there, too.

The ceremony, one of the last of its kind at Hanau since the base is due to close next year, was short and sweet. There were accolades to family and fighters, and words such as &#8220;patriot&#8221; and &#8220;proud&#8221; were invoked. And then the dismissal order was uttered and pandemonium ensued.

Horn was met by his wife, Moriah, and their two small girls, Ember and River. The soldier held 5-month-old River tightly against his chest. Ember, 4, was scheduled for play time with dad later.

Several soldiers who were interviewed expressed displeasure with the long tours. Sgt. Shanta Sain, who will be rejoining her family in Atlanta for Christmas, is hoping for much shorter tours in the future, maybe something in line with the Air Force.

Moments earlier, on the opposite side of the basketball court, Camarena was still holding his ground, watching all the bliss buzzing about him.