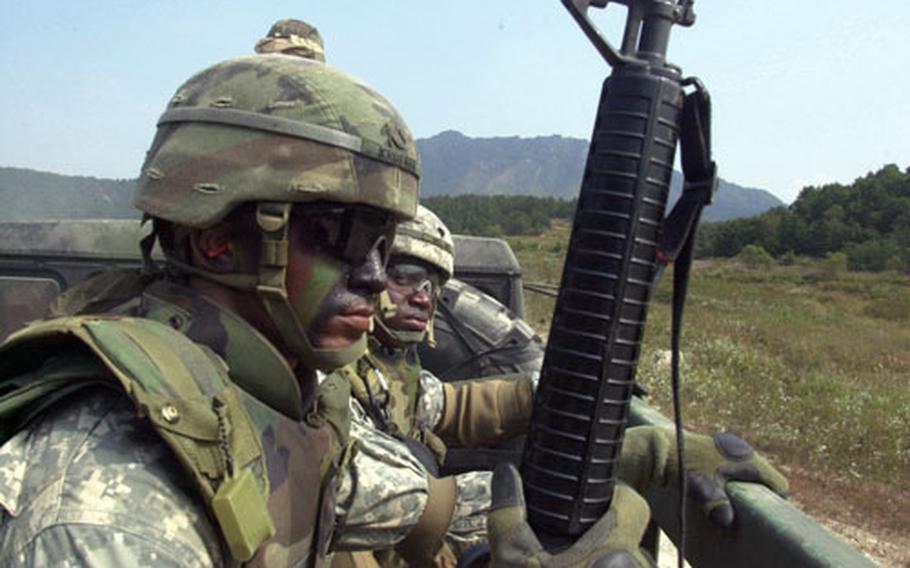 Pfc. John Kreuger, front, and Spc. Roberto Nelson, both of the 501st Special Troops Battalion, stay alert as they pull out in a convoy during training at Rodriguez Range, South Korea, on Wednesday. (Erik Slavin / S&S)

Pfc. John Kreuger, front, and Spc. Roberto Nelson, both of the 501st Special Troops Battalion, stay alert as they pull out in a convoy during training at Rodriguez Range, South Korea, on Wednesday. (Erik Slavin / S&S) 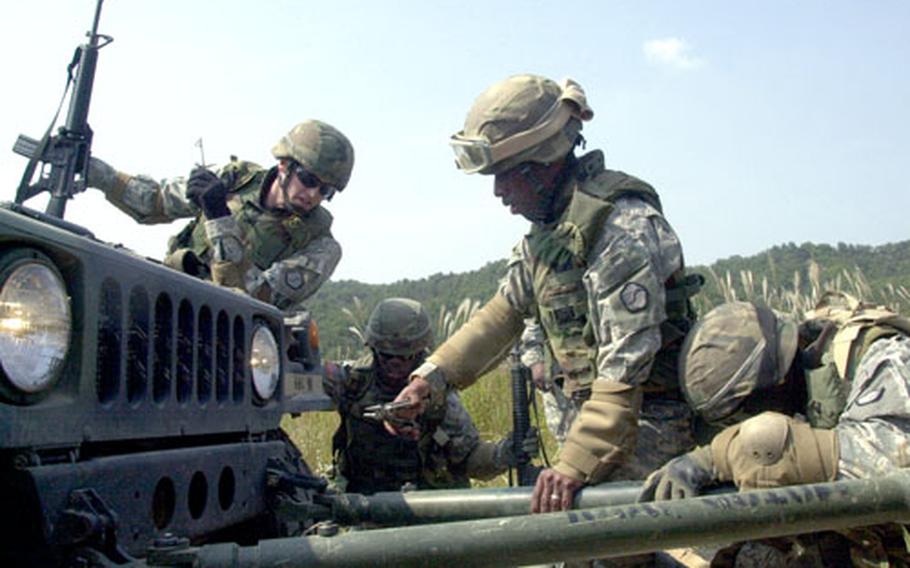 Soldiers for the 501st Special Troops Battalion hook a towbar to a disabled Humvee after a simulated attack during convoy training at Rodriguez Range on Wednesday. (Erik Slavin / S&S) RODRIGUEZ RANGE, South Korea &#8212; Three months after standing up as a unit for the first time, soldiers from the 501st Sustainment Brigade are ducking simulated artillery bursts and unloading live fire at pop-up targets.

The brigade, a part of the 19th Sustainment Command (Expeditionary) out of Camp Carroll near Daegu, isn&#8217;t full of tankers or infantrymen. In their regular jobs, the unit&#8217;s members are police and medics, cooks and maintenance soldiers.

That they are training in live-fire convoy operations designed to mimic today&#8217;s desert battlegrounds so soon after becoming a unit says volumes about the Army&#8217;s priorities today, soldiers said Wednesday.

This brigade&#8217;s ability to jell is reflective of a much bigger picture: Units throughout the Army are transforming in a push to make each of them self-sustaining.

Getting everyone on the same page is a challenge, soldiers say, but exercises such as the convoy training force them to make it happen.

This month, about 600 soldiers from seven battalions in Col. Mark Gardner&#8217;s brigade have run the lanes at Rodriguez Range in convoys of Humvees, fuel tankers and light medium tactical vehicles.

They practice first with blank ammunition before moving on to live rounds. They must react quickly to roadside bombs and ambushes. For example, if they don&#8217;t hook up a tow bar to remove a disabled vehicle quickly enough, they may face more insurgent activity.

To make those quick decisions, soldiers from different specialties must emphasize communication.

The result is that a potential weakness has become a strength, said Iraq convoy veteran 2nd Lt. Michael Pinter. For example, soldiers learn from the mechanics in their units how to make some field repairs, while the mechanics learn a few new techniques from the medics.

That reality, along with the nature of today&#8217;s insurgent warfare, means that a headquarters bookkeeper also gets trained on getting everyone out of a firefight and back to secure location.