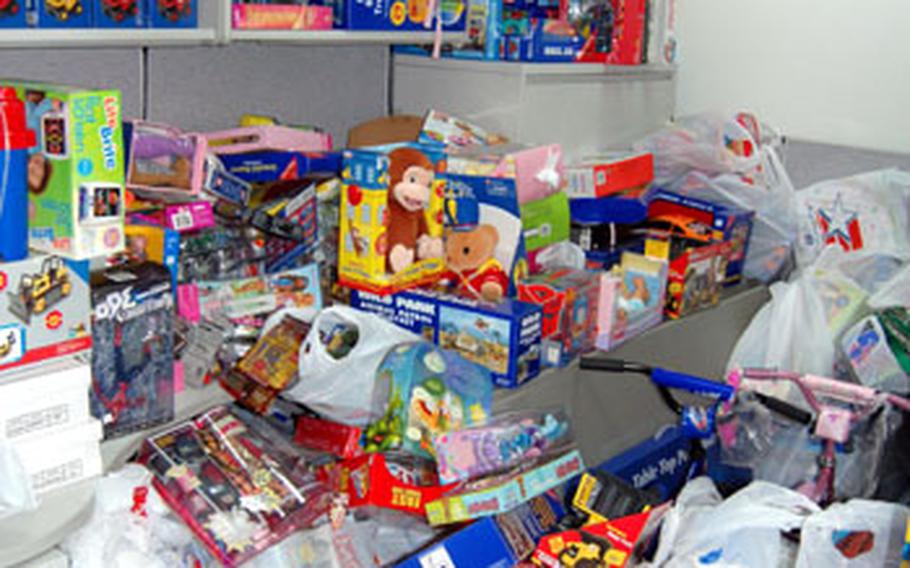 Piles of toys fill a small cubicle at the Marine Forces Korea headquarters building on Yongsan Garrison, South Korea. The toys were collected for the Toys for Tots program, which provides Christmas gifts to disadvantaged children. (Jimmy Norris / S&S)

Piles of toys fill a small cubicle at the Marine Forces Korea headquarters building on Yongsan Garrison, South Korea. The toys were collected for the Toys for Tots program, which provides Christmas gifts to disadvantaged children. (Jimmy Norris / S&S) 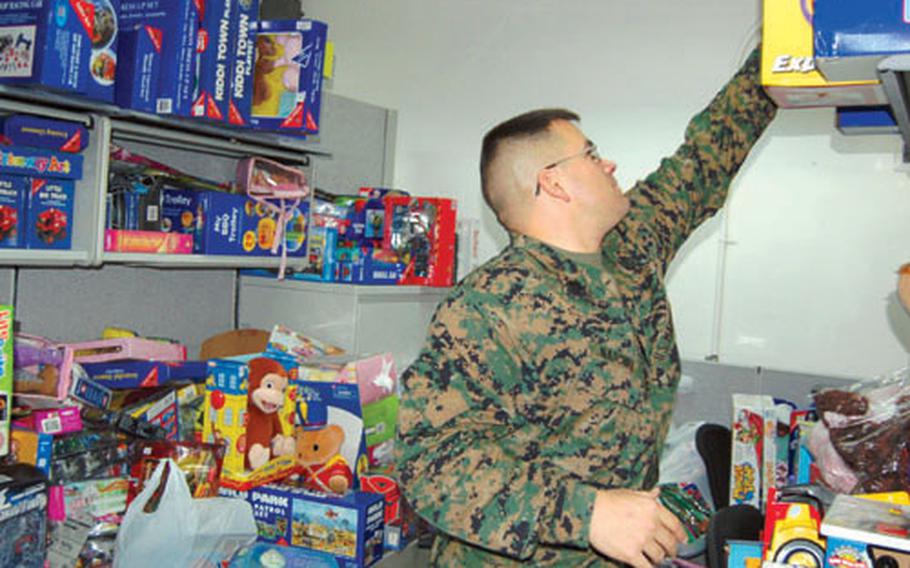 YONGSAN GARRISON &#8212; A convoy of Tonka trucks sits next to a platoon of plastic soldiers. Under them sit dozens of dolls and other toys, creating a pile that stretches to the ceiling &#8212; not what you&#8217;d typically find inside a Marine headquarters.

&#8220;This is what we have so far,&#8221; said Marine Staff Sgt. Nathan Natchke of the annual Toys for Tots collection. He said he has approximately 500 toys so far, about one-tenth of what he needs.

Natchke is spearheading this year&#8217;s program, and he hopes to collect about 5,000 toys for disadvantaged children in South Korea, up from last year&#8217;s collection of 4,000.

Toys for Tots is a 60-year-old program in which Marines gather new, donated toys for needy children.

Marine Forces Korea personnel placed collection boxes at the Yongsan Garrison post exchange and Four Seasons stores; at the Navy Club; in the schools; and at the Osan post exchange. The boxes will remain through Dec. 18.

The Marines are seeking new, unwrapped toys for boys and girls of all ages.

Natchke said Marines will deliver the toys to local orphanages between Dec. 17 and Dec. 21, and a portion will be given to children participating in the Army Community Service Angel Tree program &#8212; another way to donate toys to children in the on-base community.

While Natchke is a long way from his goals, he has high hopes.

On Saturday, a local Harley-Davidson club will escort Santa Claus from the Yongsan Commissary to the post exchange, where the club will donate $1,000 in toys.

The Yongsan Motorcycle Club is inviting fellow riders to gather at the PX about 10 a.m. Riders are encouraged to dress in the holiday spirit, and an award will go to the person and bike with the best decorations. The entrance fee is a new, unwrapped toy for Toys for Tots.

About 10:40 a.m., the motorcycles will depart the PX to get Mr. Claus. They will arrive back at the exchange with Santa at 11 a.m. and deliver the donated toys.