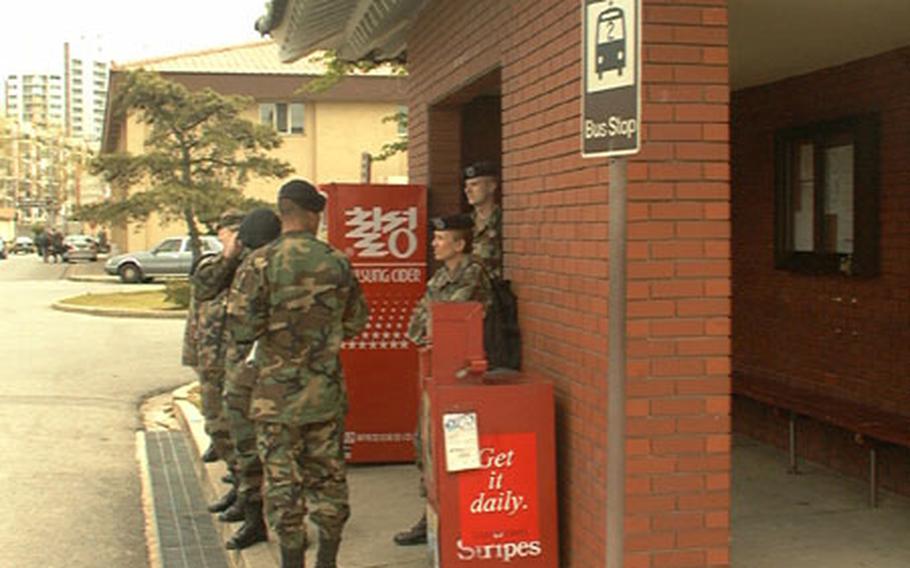 These soldiers await a bus at Army&#39;s Camp Henry in Taegu, South Korea. The bus shelter behind them was built with money the 20th Support Group won through taking part in the Army Communities of Excellence award program. (Franklin Fisher / S&S)

These soldiers await a bus at Army&#39;s Camp Henry in Taegu, South Korea. The bus shelter behind them was built with money the 20th Support Group won through taking part in the Army Communities of Excellence award program. (Franklin Fisher / S&S) 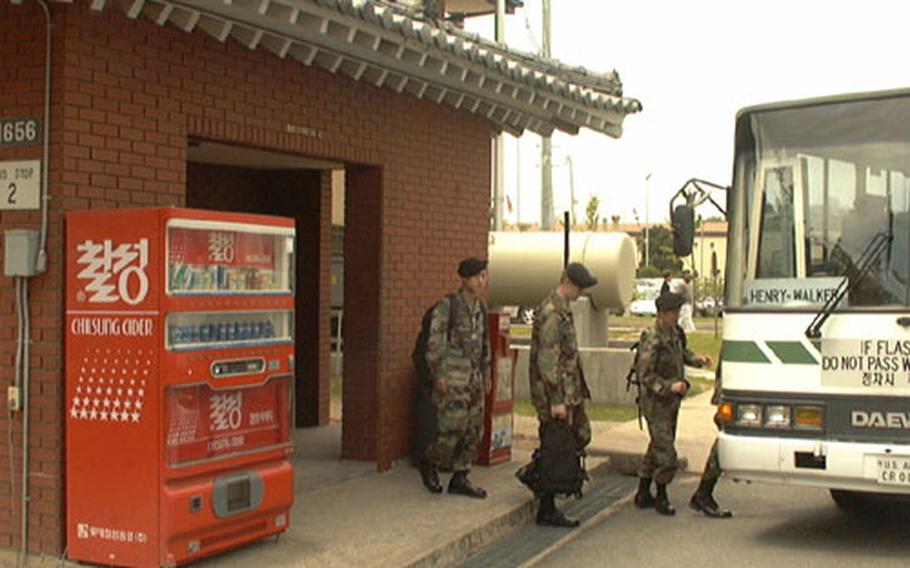 Bus shelters such as the one above at Camp Henry in Taegu, South Korea, were built with funds the 20th Support Group won by taking part in Army Communities of Excellence award program. The unit will soon have another $500,000 to spend on similar community improvements at its installations in lower South Korea. (Franklin Fisher / S&S)

TAEGU, South Korea &#8212; An Army logistics unit in lower South Korea will have half a million dollars to spend on improving its installations thanks to an Army-wide program that recognizes unit excellence.

The 20th Support Group at Taegu&#8217;s Camp Henry will reap the $500,000 windfall through the Army&#8217;s 2003 Communities of Excellence program, which measures performance of units that provide base operations services. The funds must be spent on community improvements.

The 10th Support Group on Okinawa took the top award earlier this month: $3 million. But the 20th SG and nine other runner-ups Army-wide will each get $500,000.

&#8220;A big benefit of receiving the money is that we can fund community improvements that are currently not budgeted,&#8221; said Lt. Col. Wilfred J. Plumley, the 20th SG&#8217;s deputy commander.

No decisions have been made yet on what specific projects the 20th SG will spend its money on, said William DeCook, director of resource management for the 20th SG and Area IV.

Each installation will benefit.

&#8220;We will go through a process of determining what to spend the money on, and the people who will be involved will be the community leaders,&#8221; DeCook said.

In the past, the 20th SG used ACOE funds to build an outdoor patio outside the Camp Walker bookstore, and to install a kitchen at Camp Walker&#8217;s former Sport Support Facility.

Teams of evaluators visit each unit taking part and rate it according to an extensive list of criteria that measure, among other things, how efficiently it manages planning, administration, and customer service.

The 20th has won ACOE awards at both 8th Army and Army-wide levels, variously, 12 times since the awards began in 1988.