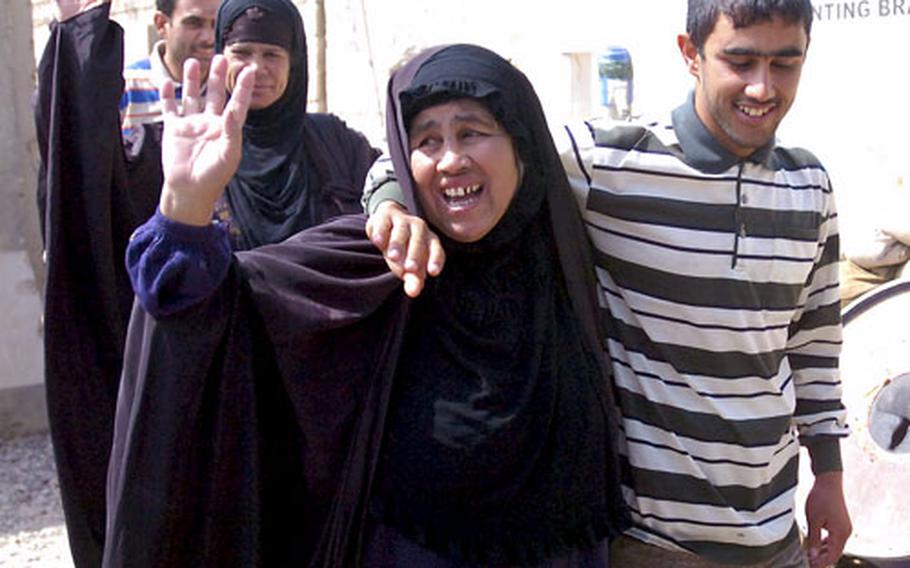 Family members rejoice after being reunited with their loved ones, who were released from U.S. and Iraqi detention facilities as a goodwill gesture during Ramadan, which began Sept. 13 in Iraq. (Angel D. Martinez / Courtesy of U.S. Army)

Fifty more detainees were released last week in Iraq as part of a program where a family member is held liable if the person slips up.

The release was one of several done just before and during Ramadan, the monthlong Muslim holiday that began Sept. 13 in Iraq.

The detainees were a security risk to Iraqis and coalition forces at one point but are no longer a threat, a military spokeswoman said in a release issued Sunday.

While they&#8217;re held, detainees have the chance to work if they want to and pursue educational opportunities, officials say. They can send money earned to their families as well as have relatives visit them.

There is also a &#8220;re-education&#8221; program in which Islamic clerics, psychologists and behavioral scientists work one-on-one with the detainees, officials say. If the detainees are illiterate, they can learn to read.

In mid-September, 75 men from Anbar province were released. A board screened the detainees&#8217; files and voted to release those not guilty of serious violent crimes. Detainees pledged to renounce violence and misconduct.

And on Sept. 12, the day before Ramadan began, 67 detainees were released in Diyala province, officials say. Coalition forces released 37 to the authority of the Iraqi Provincial Police after a review of evidence.

The police released the 37 as well as 30 of their own jail detainees. Each person who was freed said a prayer and took a pledge not to break the law or bear arms against the Iraqi government or coalition forces, officials say.