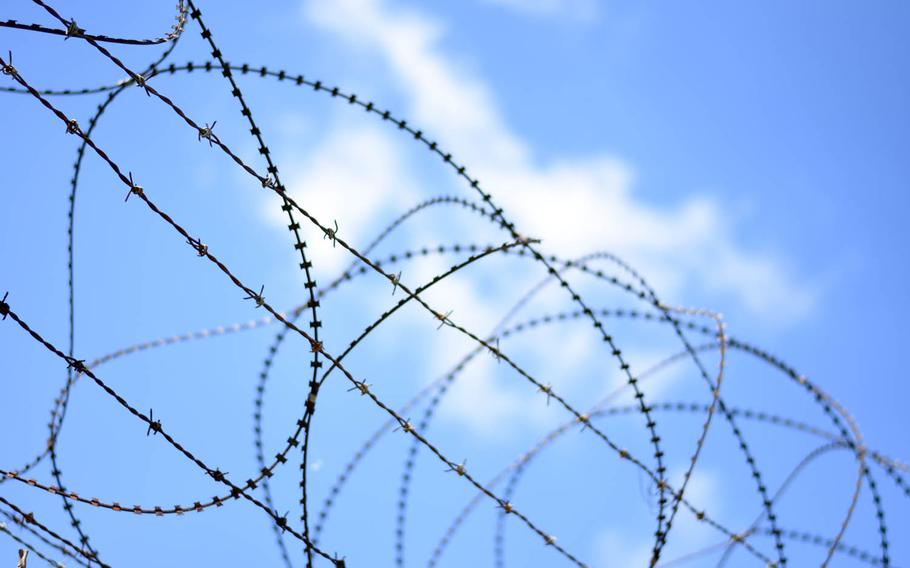 Barbed and concertina wire top fencing close to the Imjin River near the Demilitarized Zone between North and South Korea in this photo from May 2017. (Aaron Kidd/Stars and Stripes)

SEOUL, South Korea — Five North Koreans defected by sailing across the maritime border into the South this weekend, the coast guard said of the latest in a series of risky cross-border escapes.

Four men and one woman were found Saturday evening after South Korea’s coast guard responded to a military request to check an unidentified boat off the peninsula’s east coast, a coast guard official said.

The boat, which had crossed the border known as the Northern Limit Line and was northeast of Gangneung city, was then towed to the nearby port of Mukho, the official said, speaking on condition of anonymity to provide the details.

The North Koreans said they wished to defect and were turned over to the government for investigation, the official said. North Koreans are automatically granted citizenship once they arrive in South Korea, but must go through a transition period including debriefing and re-education.

The incident pushes the number of North Koreans who have defected by crossing the heavily fortified border by sea or land to at least 10 since September. While South Korea has recorded an overall increase in the number of defectors, most escape via China or other countries.

A spokesman for the Unification Ministry, which oversees defectors and inter-Korean relations, declined to comment on the most recent incident pending the outcome of the investigation.

“It is true there were a few defection cases by using boats or the cease-fire line lately,” the spokesman, Lee Duk-haeng, said Monday during a regular press briefing. “The investigation is still ongoing.”

Many of the defectors fled by boat, sometimes accidentally. The Unification Ministry says there has been an uptick in aging North Korean fishing vessels going astray, apparently because leader Kim Jong Un has ordered an increase in the production of fish.

Many of the rescued fishermen have requested to return home and were repatriated, including eight who were found drifting on June 23 after their boat suffered engine problems near Ulleung Island off the east coast, according to Yonhap News Agency.

The coast guard has not increased patrols or taken special measures because of the defections but is on the lookout for North Koreans in need of rescue. “We are not tightening guard specially. But we’re looking in every nook and corner,” the official said.

Earlier this month, a North Korean man defected by swimming south with the aid of plastic foam pieces on his shoulders, the military said. He was found near an observation post on the northern part of the Han River just west of Seoul.

A father and his son also defected after being found on a fishing boat on June 3, a Unification Ministry official said, speaking on condition of anonymity to disclose the details. The pair apparently intended to defect but others have made the decision only after the opportunity arose, officials said.

On June 14, a North Korean soldier also escaped by taking the extremely dangerous land route of crossing the Demilitarized Zone, which is dotted with land mines. He was the second soldier to do so since September.

The number of North Korean defectors since the 1950-53 war between the countries ended with an armistice instead of a peace treaty surpassed 30,000 in November and rose to 30,490 in March, according to ministry statistics.

The increase comes as tensions have risen between Pyongyang and the international community over its nuclear weapons program. That has prompted the U.N. Security Council to impose punishing economic sanctions that have worsened living conditions in much of the communist state.