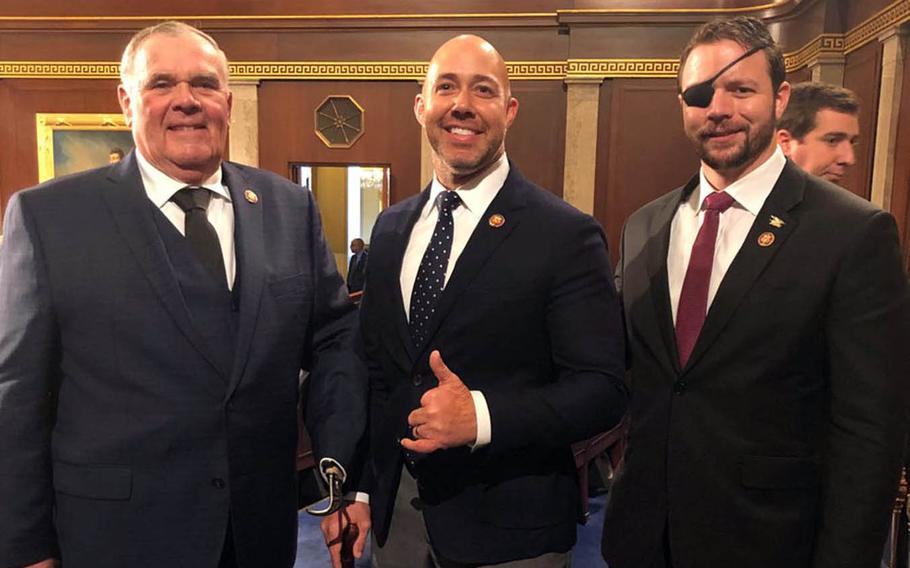 “5 eyes. 5 arms. 4 legs. All American,” Mast captioned the image in a post on Twitter. “Welcome to Congress, @ElectJimBaird and @DanCrenshawTX.”

The tweet cheekily paid homage to the congressmen’s sacrifices during their military service.

Each of the congressmen have earned Bronze Stars and Purple Hearts.

“I’m sorry, I know he lost his eye in war or whatever,” Davidson added after the joke.

After facing outrage over the comment, Davidson apologized on the following SNL episode.

“The man is a war hero and he deserves all the respect in the world,” he said.

After Davidson joked in the sketch that Republicans and Democrats alike could agree the comedian was a jerk, Crenshaw joined the actor in a cameo appearance.

“There’s a lot of lessons to learn here, not just that the left and right can still agree on some things, but also this: Americans can forgive one another,” Crenshaw said on the show.

The 116th Congress convened Thursday with Baird and Crenshaw serving for the first time at the congressional level. Mast has served in Congress since January 2017.