Soldiers from the 4th Stryker Brigade Combat Team, based in Fort Lewis, Wash., evacuate a soldier after storming a terrorist compound in a mock exercise at Rodriguez Range, South Korea, on Thursday. (Erik Slavin / S&S)

Soldiers from the 4th Stryker Brigade Combat Team, based in Fort Lewis, Wash., evacuate a soldier after storming a terrorist compound in a mock exercise at Rodriguez Range, South Korea, on Thursday. (Erik Slavin / S&S) 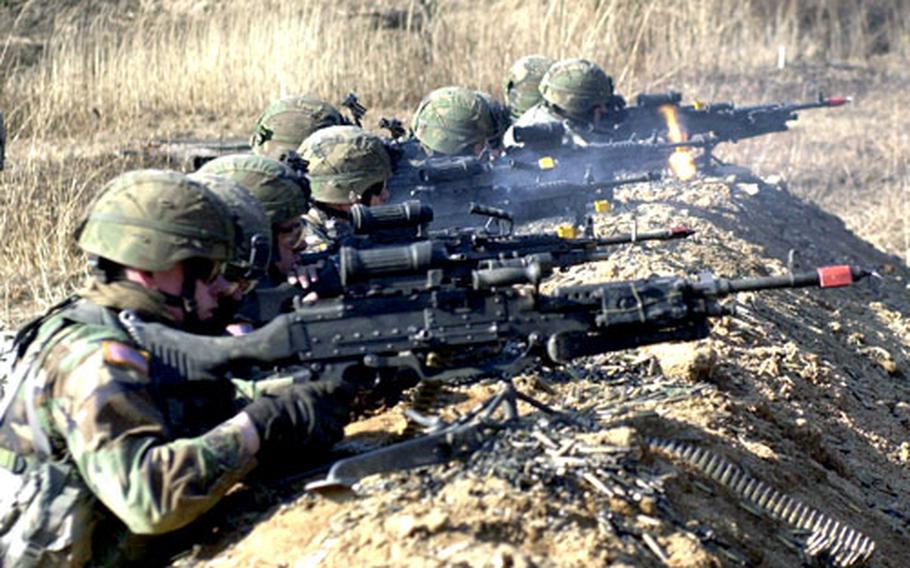 Soldiers from the 4th Stryker Brigade Combat Team, based in Ft. Lewis, Wash., secure a mock terrorist encampment in preparation for a later live-fire drill at Rodriguez Range on Thursday. (Erik Slavin / S&S) 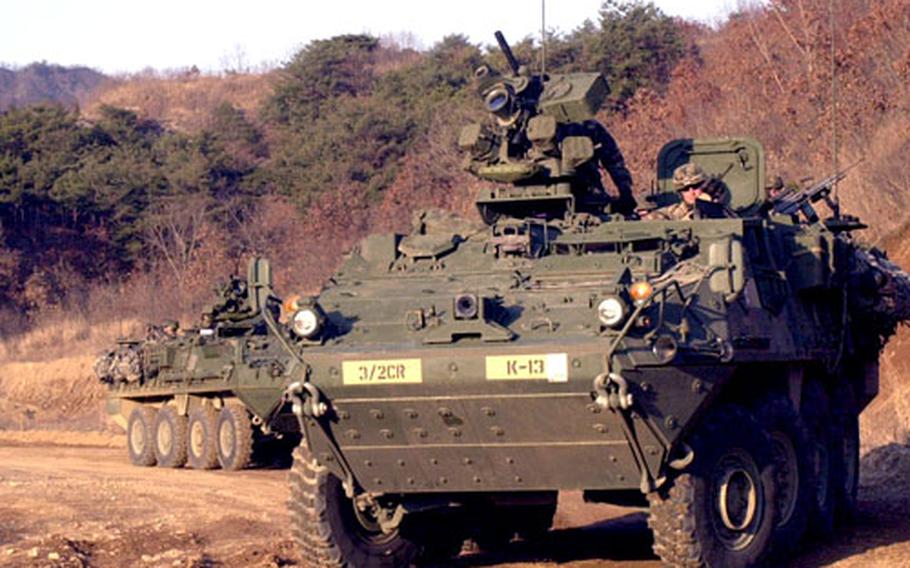 Soldiers from the 4th Stryker Brigade Combat Team roll toward their target during a live-fire exercise. (Erik Slavin / S&S)

RODRIGUEZ RANGE, South Korea &#8212; Much of what the 4th Stryker Brigade Combat Team does would be familiar to soldiers from any infantry unit.

And the maneuvering and maintenance of the light-armored, speedy Stryker vehicles may seem old hat to soldiers with past heavy-armor jobs.

But it&#8217;s up to leadership from both disciplines to define the future of battlefield procedure for the Stryker, introduced in 2002 as a lighter, infantry-centered alternative to the Bradley fighting vehicle.

On Thursday, those leaders watched as their band of predominantly &#8220;green&#8221; soldiers engaged in a Stryker live-fire exercise scenario that included storming a &#8220;known terrorist encampment.&#8221;

Four Strykers rolled through Rodriguez range, firing their .50-caliber guns until within infantry range of the wooden shacks serving as the terrorist hideout.

Soldiers then began pouring out of the vehicles, setting up a line of suppressive fire while another Stryker squad stormed the shacks.

&#8220;The only thing that comes close in intensity is the live fire while in deployment,&#8221; said Cpl. Kimo Griggs.

Griggs&#8217; downrange experience is a rarity among the junior enlisted soldiers in his Fort Lewis, Wash.-based, unit, which started from scratch in 2005.

Most of the officers and non-commissioned officers at the range Thursday had served in combat areas. However, almost all of the soldiers are one year or less out of basic training, Sgt. 1st Class William Linares said.

Much of what they&#8217;ve been learning is basic soldiering, he added. Setting up a platform, targeting, calling for fire and securing an area are all high on the list.

Linares, who has worked on Bradleys before, says the Stryker is much quieter but doesn&#8217;t match the Bradley&#8217;s firepower.

The Stryker comes in eight different models. One carries anti-tank missiles; another is tailored toward minesweeping.

Their lighter armor has been criticized by some. Others argue that such criticism misses the point, that the Stryker&#8217;s main task is to carry infantry.

Strykers, which reach top speeds of 60 to 70 mph, also have proven their worth while traveling today&#8217;s battlegrounds, Linares said.