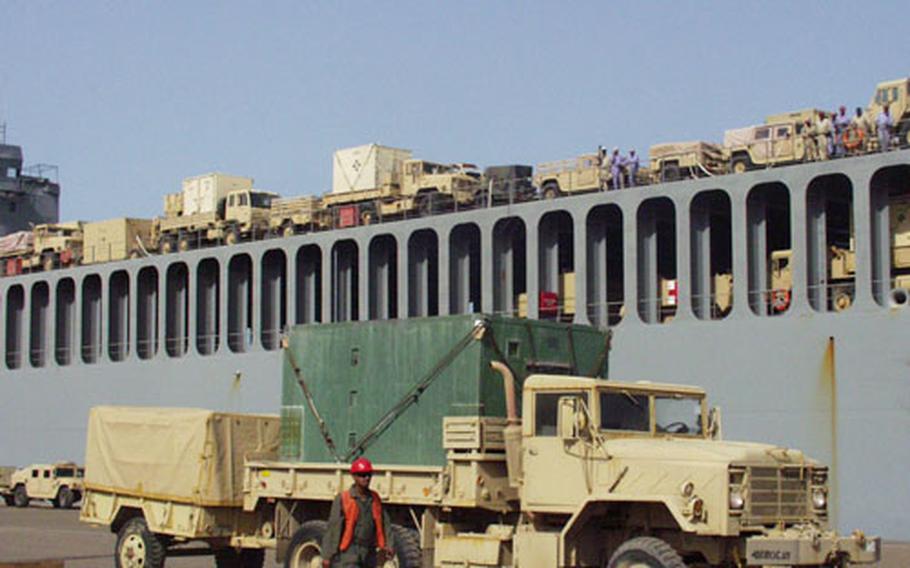 On Thursday the 4th Infantry Division continued to unload its tanks, armored personnel carriers, trucks and other equipment in Kuwait. The U.S. Navy ship Cape Victory was being unloaded on Thursday. It can carry about 450 vehicles. (David Josar / S&S)

On Thursday the 4th Infantry Division continued to unload its tanks, armored personnel carriers, trucks and other equipment in Kuwait. The U.S. Navy ship Cape Victory was being unloaded on Thursday. It can carry about 450 vehicles. (David Josar / S&S) 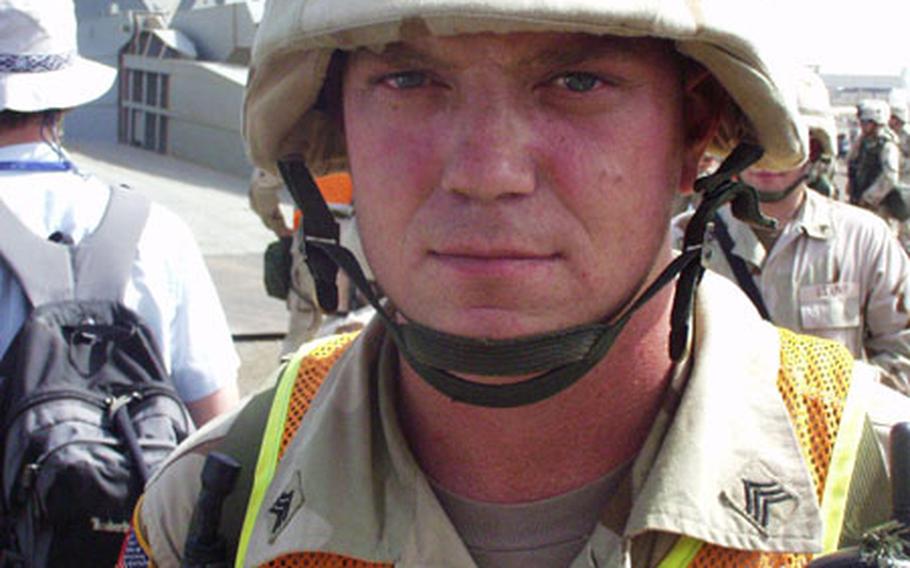 Army Sgt. Wayne Sipe, a medic for the 4th Infantry Division, said he had moved his family off-post while he waited at Fort Hood, Texas, to be deployed to the Persian Gulf. He waited more than a month before he actually left Texas. (David Josar / S&S)

SHUAIBA PORT, Kuwait &#8211; After two months of waiting, soldiers from the 4th Infantry Division have finally gotten on the ground in Kuwait and are closing in on the combat that has raged in Iraq for two weeks.

On Thursday, members of the unit helped unload the Cape Victory, a U.S. Navy ship with a cargo of high-tech tanks, attack and surveillance helicopters, armored personnel carriers and other vehicles and trailers.

The Cape Victory was the sixth ship to be unloaded over the past several days, and an additional 20 ships are still out at sea waiting to unload the rest of the 4th ID&#8217;s equipment.

The boats had been floating off the Turkish coast for weeks, as military officials waited for approval that never came for coalition forces to use Turkey as a staging area against Iraq.

When Turkey&#8217;s parliament voted not to allow U.S. troops to use their country, the ships turned toward Kuwait.

Dozens of 4th ID soldiers rushed to get the vehicles off the boats and make sure the equipment was ready for combat.

Near the port behind a dirt berm surrounded with a fence topped with razor wire, many of the vehicles had been checked out and were prepared for war.

There were more than a dozen columns of trucks, Humvees and other vehicles, and each of the columns was literally a mile long.

&#8220;They&#8217;ve been sitting around quite some time on the boat. We have to get them ready to go again,&#8221; said Sgt. Wayne Sipe, a medic who was helping direct the flow of forklifts and armored vehicles rapidly coming off the Cape Victory. He said it takes between 12 and 18 hours to unload one ship.

The helicopters were shrink-wrapped in plastic for the journey. After they were towed off the ship, their propellers were reassembled and flown away.

As the equipment waited on ships, most of the 4th ID soldiers were at home at Fort Hood, Texas.

About eight weeks ago, he moved his wife and children off base and back with relatives. But as he waited alone in the barracks for the order to deploy, he regretted that decision.

Most of the soldiers did not travel with the equipment and only began flying to Kuwait during the past week to link up with the vehicles.

Odierno said the timeline is fuzzy for when all the equipment will be unloaded and ready to go. He estimated between one and two weeks to complete this part of the mission.

Army Maj. Kevin MacWatters, the officer in charge of unloading the ships, said the 4th ID is considered the most technologically advanced division in the Army. Every tank and Bradley fighting vehicle is computer-linked to the command center and each other.

Despite waiting weeks to find out where they would deploy and missing the opening salvos of the fight in Iraq, officers and soldiers said morale of the 4th ID is undeterred.

Army Spec. Robert Muriel, 21, said now that the soliders are here they can finally do their jobs.