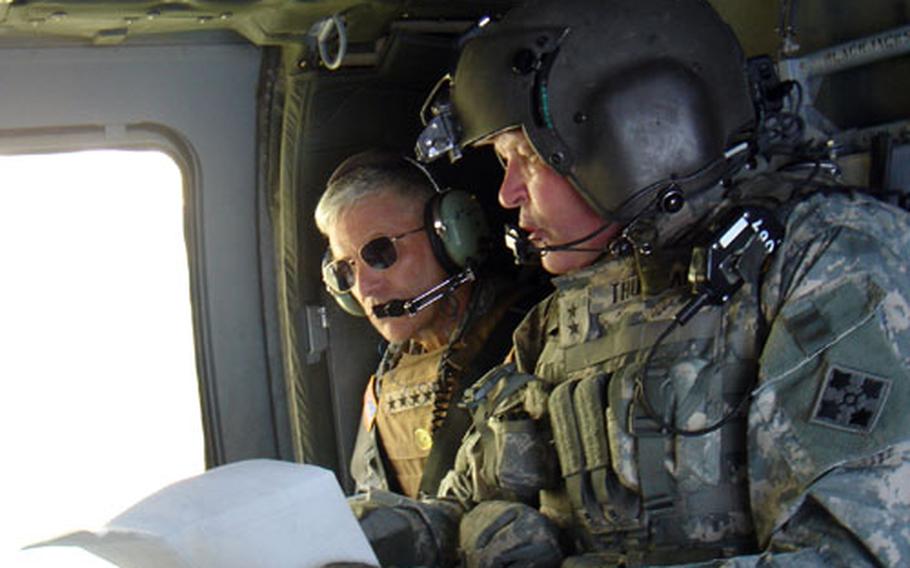 Gen. George Casey, right, the top U.S. general in Iraq, talks to Maj. Gen. James D. Thurman, commander of U.S. forces in Baghdad, during a visit to a northern Baghdad neighborhood. Thurman has been nominated to take the helm of V Corps. (Elena Becatoros / AP)

Information about when Thurman would take over V Corps in Heidelberg, Germany, was not available Tuesday.

&#8220;We just found out this morning, too, that the secretary of defense has announced the appointment,&#8221; said Connie Summers, a V Corps spokeswoman.

A spokesman for Thurman in Baghdad, said the general will stay with the 4th ID in Iraq at least until it redeploys.

In addition to commanding the 4th ID, Thurman is also commander of Multi-National Division-Baghdad, which consists of more than 69,000 U.S. and coalition military, and Iraqi army and police forces. He assumed command of his Baghdad post in January.

Before taking command of V Corps, a three-star command, Thurman will have to undergo Senate confirmation. Thurman has also been recommended for promotion to lieutenant general.

Lt. Gen. Peter Chiarelli led the V Corps headquarters into Iraq at the beginning of the year, under the name Task Force Victory, to take over command of Multi-National Corps-Iraq. Chiarelli was never officially assigned to V Corps, Summers said.

In Iraq, Thurman has recently overseen Operation Together Forward, a program aimed at reining in sectarian violence in the Iraqi capital.