4th Brigade’s departure from Fliegerhorst Casern is no surprise 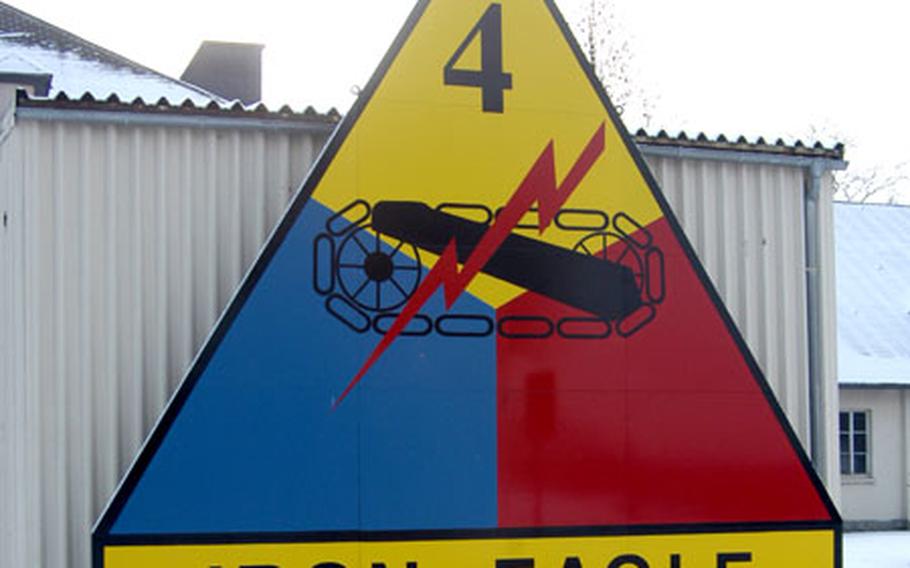 A giant 4th Brigade sign opposite brigade headquarters on Fliegerhorst Casern in Hanau, Germany. The 1st AD brigade will reflag with the 1st Infantry Division and be part of their combat aviation brigade, when the division returns to Fort Riley, Kansas. (Michael Abrams / S&S)

HANAU, Germany &#8212; During the Cold War, Fliegerhorst Casern was one of U.S. Army Europe&#8217;s most strategically important airfields, given its proximity to the Iron Curtain.

But ever since the Treaty on Conventional Armed Forces in Europe was signed in 1990, the need for the old German air force base seemed to wane, given the drawdown of U.S. forces and shifting priorities.

So, with the latest military makeover under way, Thursday&#8217;s formal announcement by U.S. Army Europe that the last aviation unit would leave Fliegerhorst hardly caught anyone off guard.

The 4th Brigade is &#8220;going back&#8221; this summer to the United States, to Fort Riley, Kan., in particular. There, it will become the aviation asset for the 1st Infantry Division, which also is departing Europe for the same locale.

At two meetings Wednesday for unit personnel, dependents and civilians, Hamontree and Army officials disclosed the move and the time line that will govern it. The move is supposed to be completed by the end of the fiscal year, though officials expect to pack it in much sooner, probably June or July, Hamontree said.

The return of the 4th Brigade is part of a broad plan to restructure aviation assets worldwide, according to USAREUR. The Army is establishing 11 Combat Aviation brigades.

Hamontree said Fort Riley is ready to accommodate the soldiers and family members who will be arriving later this year, an issue that was of great concern. Currently, the plan is to transfer roughly 800 troops &#8212; or 65 percent of the brigade personnel at Fliegerhorst &#8212; to Fort Riley, with the balance being redistributed to bases in Europe and the United States.

While the fate of Fliegerhorst was not announced Thursday, the expectation is that it will be returned to the German government fairly soon.

Spc. Joon Kwon said outside of brigade headquarters Thursday afternoon that rumors about the casern closing have been circulating for several years. Based at Hanau until 2003, Kwon returned for a second tour in October. He&#8217;s hoping to stay in Germany, but is prepared for anything.

The sentiment was echoed by Lt. Col. Alfred Pantano, commander of the 94th Engineer Battalion, whose Vilseck-based unit will be heading to Fort Leonard Wood, Mo., this spring.

&#8220;The Army needs engineers so many other places you just can&#8217;t afford to leave a battalion here with the number of soldiers there will be (when the divisions leave Europe),&#8221; Pantano said.

The 94th supports the 1st Infantry and 1st Armored divisions, which are also slated to return to the U.S., he said.

Exactly how the realignment of forces will affect Department of Defense Dependents Schools is not entirely settled, with school administrators looking at the possibility of realigning &#8212; or even closing &#8212; schools, said David Ruderman, DODDS deputy public affairs officer.

An initial analysis Thursday indicated that reassignments or unit deactivations will affect 290 students in the Hanau area, and 40 children in the Darmstadt area, Ruderman said. District and area officials are beginning the process of what to close and what to merge, he said. Hanau has three elementary schools, one middle school and one high school in the Hanau area.

One Hanau administrator, who asked not to be identified because the person is not authorized to talk to the media, said there are no plans to close Hanau schools &#8220;right now,&#8221; though faculties have gotten no assurances from the Army or DODDS.

The elementary school in nearby Babenhausen also could be in jeopardy, Ruderman said.

Stars and Stripes reporters Terry Boyd and Seth Robson contributed to this story.