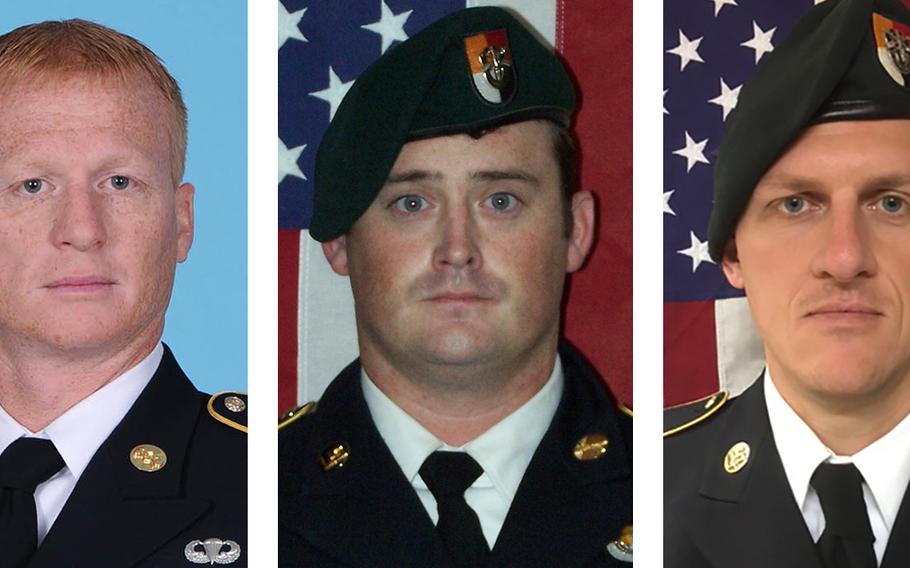 WASHINGTON — The body of a fourth American soldier killed in an enemy ambush of a joint patrol of U.S.-Niger forces in the West African nation was recovered Friday as the Pentagon identified three soldiers killed in the same attack.

Nigerien soldiers found the fourth U.S. soldier’s body Friday near the location of the assault, said Army Col. Mark Cheadle, a spokesman for U.S. Africa Command. The soldier had been listed as “duty status: whereabouts unknown” since he was confirmed missing following the surprise attack Wednesday on the about 40-person patrol that was on a mission to meet with local leaders to discuss regional stability efforts, he said.

The Pentagon withheld information about the fourth soldier until Friday hoping he would be found alive. The soldier’s family was notified of his death Friday shortly after his body was recovered, but the Pentagon was withholding his name for 24 hours, which is Defense Department policy.

Staff Sgts. Bryan C. Black, Jeremiah W. Johnson and Dustin M. Wright, who were assigned to Fort Bragg in North Carolina, died of wounds suffered in the surprise attack in the southwestern part of Niger near its border with Mali, according to a Defense Department statement. In addition to the four soldiers killed, two other American troops were wounded in the attack and one partner-nation soldier was killed, defense officials said.

Since 2015, 3rd Special Forces Group has focused much of its operations on northern and western Africa where they work hand-in-hand with partner nations to build their military capacity with the aim of promoting regional stability, according to the Army.

Johnson, 39, was a chemical, biological, radiological and nuclear specialist from Springboro, Ohio, according to the Army. He enlisted in the service in October 2007. His awards and decorations included two Army Commendation Medals, five Army Achievement, three Army Good Conduct Medals, the National Defense Service Medal, the Global War on Terrorism Service Medal, the Armed Forces Service Ribbon and the Marksmanship Qualification Badge – Expert for pistol and rifle.

Wright, a 2007 graduate of Toombs County High School in southeast Georgia, had previously deployed to Africa, according to family members.

Ginger Russell, Wright’s aunt, told the Southeast Georgia Today News, that the family was shocked by the news of his death and has been left with “many questions.”

“Dustin was the most lovable, funny jokester who never met a stranger and would give his last dime to help someone in need,” she said, according to the local news website based in Vidalia, Georgia. “He made the ultimate sacrifice. He is our hometown hero.”

The United States has about 800 troops deployed to Niger primarily charged with supporting local forces fighting extremist groups including Boko Haram and al-Qaida in the Maghreb, who operate in the region, according to U.S. Africa Command.

However, it remained unclear Friday what group was responsible for the assault Wednesday. Cheadle declined to provide information about the enemy, however another U.S. defense official, who spoke on condition of anonymity, said a local group affiliated with the Islamic State was suspected.

The attack was entirely unexpected. It appears to be the first time American troops have come under fire in Niger. Before the patrol left its base, officials had determined the threat of attack was “unlikely,” Cheadle said Friday.

But the deadly assault has forced U.S. Africa Command to evaluate what protective measures it might need to use for future missions in the region. The measures could include flying armed drones above the patrol, which Cheadle said was not considered for the operation Wednesday.

“This was clearly something that had we anticipated this sort of attack, we would have absolutely devoted more resources to it to reduce the risk,” he said. “That’s something we are looking at right now.”

Cheadle said some members of the assaulting force were killed in the firefight.

He vowed the United States would retaliate.

“We are resolved and stalwart in our efforts to go after those who attacked us – this joint patrol of Nigerien and U.S. forces,” Cheadle said.