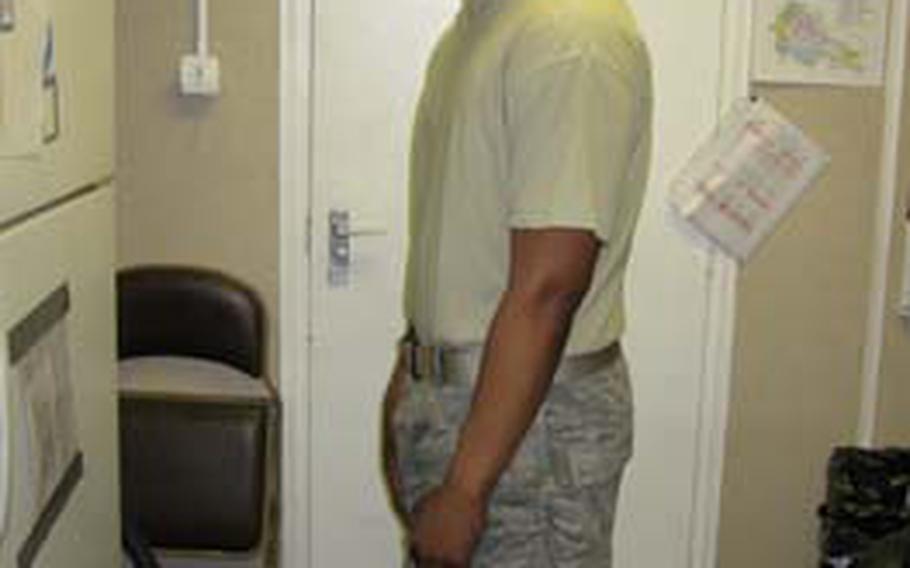 Senior Airmen Brad Ficklin said a family history of diabetes, in part, motiviated him to lose the weight. (Photo courtesy of Brad Ficklin)

Ficklin finished first among men in the competition based on the reality show that challenges participants to lose hundreds of pounds. He lost 49 pounds from early January to early April. His reward &#8212; apart from a healthier lifestyle &#8212; is a free locker for a year in the base&#8217;s Hardstand Fitness Center.

More than 100 people started the competition, but only 25 people finished by showing up for all three weigh-ins.

"Obviously, they are working to fit the Air Force physique," said April Burson, a fitness specialist at Hardstand who worked with the Biggest Loser participants. "It&#8217;s a positive way to get them into the gym."

Ficklin said he got started on losing weight before the contest kicked off and he had a lot of motivation to slim down.

"What made me think about it is of course I was overweight and I have a family history of diabetes," said Ficklin, who serves with the 100th Logistics Readiness Squadron.

Ficklin trimmed his 6-foot, 255-pound frame by using the Atkins Diet, cutting back on sweets and putting more time in at the gym. He said the diet taught him how to eat better and how to scale back on the junk food. He boasted that he used to be able to eat an entire pie by himself.

But before he lost the weight, 10 percent of his body fat and more than 7 inches from his waistline, he dreaded physical fitness tests.

"You have to nearly kill yourself to pass the PT test," Ficklin said about being overweight. "I was barely making the 75 [minimum score]. Your chain of command, they look at you like you passed, but you are in the danger zone."

Ficklin said he has seen his PT scores go from just getting by to an 85, which is just shy of a 90 &#8212; the score needed to get an excellent rating on the test.

And better PT scores are not the only thing he noticed since he trimmed down.

"You get more looks from the opposite sex. I get a lot of comments &#8230; you keep getting compliments from people," Ficklin said.