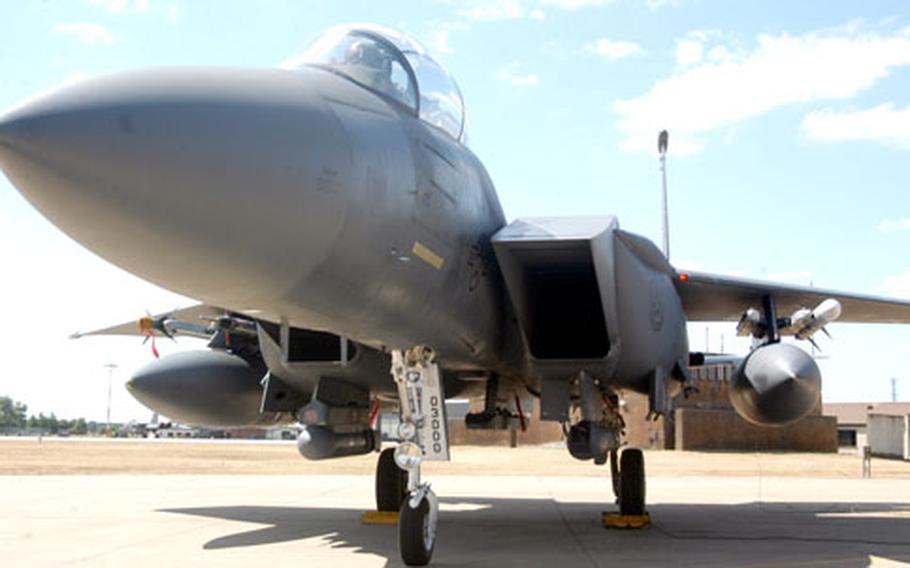 An F-15E from the 494th Fighter Squadron at RAF Lakenheath sports some of new weapons technology that the unit will deploy with in September, including the Sniper targeting pod and BRU-61 small diameter bomb launcher. (Ben Murray / S&S)

An F-15E from the 494th Fighter Squadron at RAF Lakenheath sports some of new weapons technology that the unit will deploy with in September, including the Sniper targeting pod and BRU-61 small diameter bomb launcher. (Ben Murray / S&S) 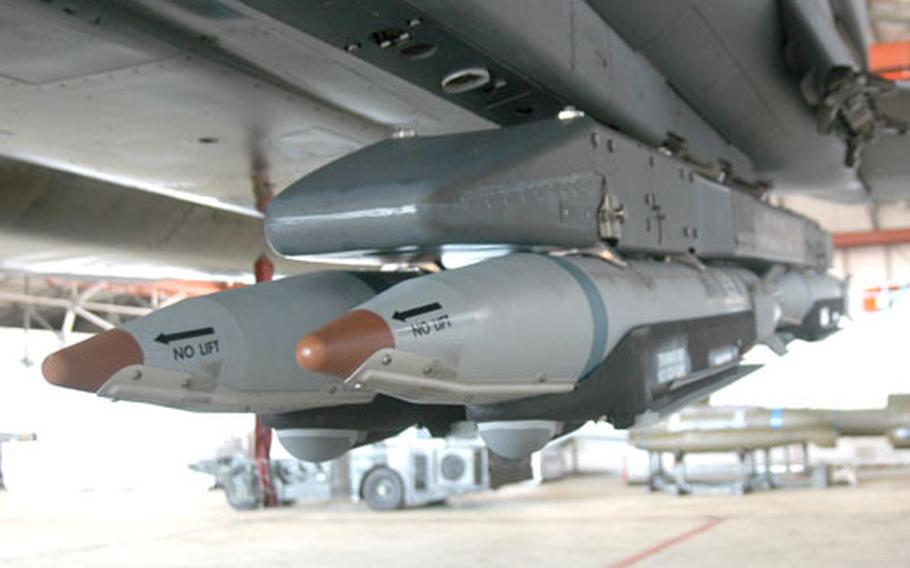 A rack of four practice GBU-39/B small diameter bombs is mounted on a specialized delivery rack, the BRU-61/A, in a hangar at RAF Lakenheath. (Ben Murray / S&S)

RAF LAKENHEATH &#8212; It reads like a wish list of upgrades air-to-ground fighter pilots would want before heading to a war zone: the ability to hit more targets from farther away with better precision and less collateral damage than ever before.

And that&#8217;s just what&#8217;s in store for F-15E pilots in the 48th Fighter Wing at RAF Lakenheath who are the first in the Air Force to receive a new targeting, imaging and weapons system now being fitted to their jets.

The pilots are preparing for a September deployment to support missions in Iraq and Afghanistan, where they will be the first to use the weapons system in combat, said Lt. Col. Will Reese, commander of the 494th Fighter Squadron.

Pilots returned from last week&#8217;s practice run brimming with accolades for the upgraded targeting and imaging software, called Suite 5, and the SDB.

With Suite 5, pilots can, for instance, receive coordinates and photographic images of targets while they are in the air and track where each jet in a formation will strike, avoiding doubling up on single targets, Siberski said. Even if a target changes &#8212; say, a tank moves to a new position &#8212; pilots can get updated photos and information on the fly with Suite 5 and use it to re-set the strike.

The upgrades were necessary partly because of the capabilities offered by the SDB, a slim, short bomb fitted with a pair of deployable wings that help extend its range to enormous distances.

At 70.8 inches long with a warhead only 6 inches in diameter, it weighs just 250 pounds and comes in pre-packaged racks of four. An F-15E can currently carry 12 SDBs at once, each of which can deliver a powerful but relatively contained blast within just a couple feet of a desired target.

The bomb also can be delivered from ranges that far exceed any other bomb in the wing&#8217;s arsenal. Reese wouldn&#8217;t say exactly how far it can go, but its range is at least four times as long as any previous bomb&#8217;s reach, he said.

To illustrate what that kind of capability does for pilots, Siberski related a story of a mission he flew in Iraq in 2003, in which he was in the air for seven hours armed with nine 500-pound, laser-guided bombs.

To give further context to the evolution the SDB represents, Reese said that during Desert Storm, pilots could have carried six bombs for one target, hefting 12,000 pounds of ordnance for a single strike.

The Air Force is investing $1.2 billion for production of the bomb, according to a Boeing news release.

It&#8217;s part of the force&#8217;s move to become smaller and faster, Reese said, and of all the qualities the new systems enhance, speed is the greatest one, members of the 48th said. From drawing up missions and allocating targets to loading the bombs to maintaining the computers, things are getting faster, members said.

For maintainers, the racks of SDBs are easy to handle because of their size and the high-tech sensors and delivery system, which trim the time needed to unload and re-arm a jet, said weapons load team chief Staff. Sgt. Chace Morris, from the 48th Aircraft Maintenance Squadron.

The new bombs also give pilots the option to select their fuse length from the cockpit, something that used to have to be done on the ground. Now pilots have the ability to decide in the air whether to set the bomb to go off above a target or after penetrating three feet of concrete, Siberski said.

Reese said it was an honor for his squadron to be the first to &#8220;bed down,&#8221; with the technology, and others will follow. Over the summer, the rest of the wing&#8217;s F-15E jets also will receive the new capabilities, he said.