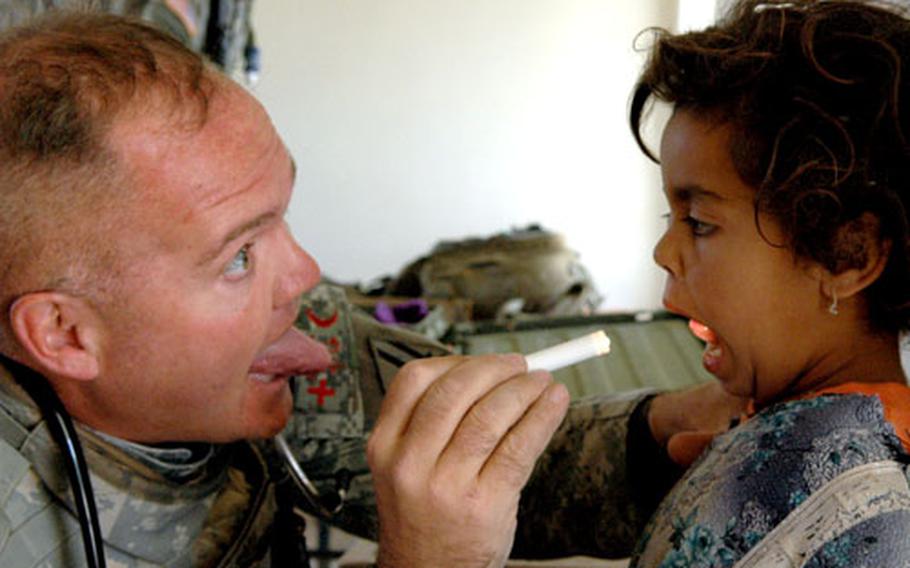 Medic Todd Cole asks an Iraqi girl to stick her tongue out during a medical exam during a civil affairs health mission near Camp Scania recently. (Monte Morin / S&S)

Medic Todd Cole asks an Iraqi girl to stick her tongue out during a medical exam during a civil affairs health mission near Camp Scania recently. (Monte Morin / S&S) 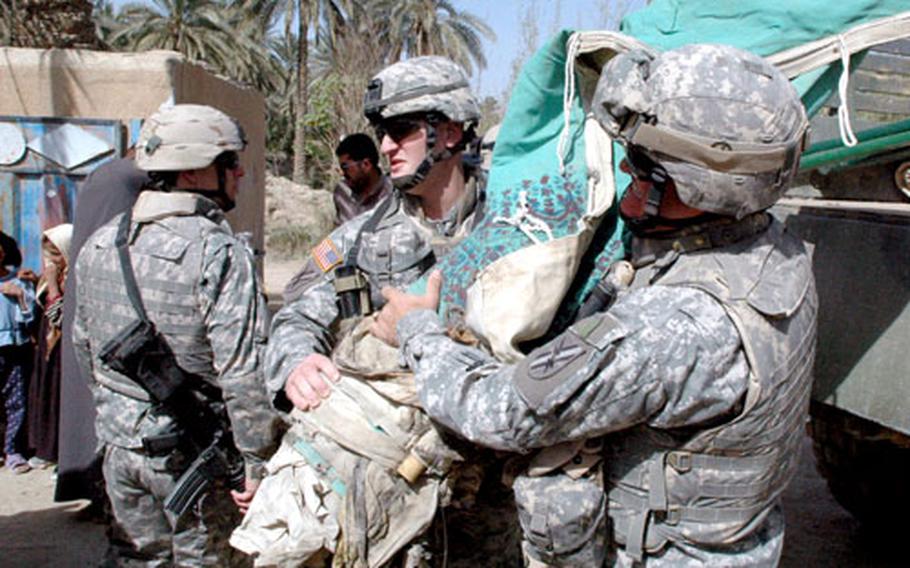 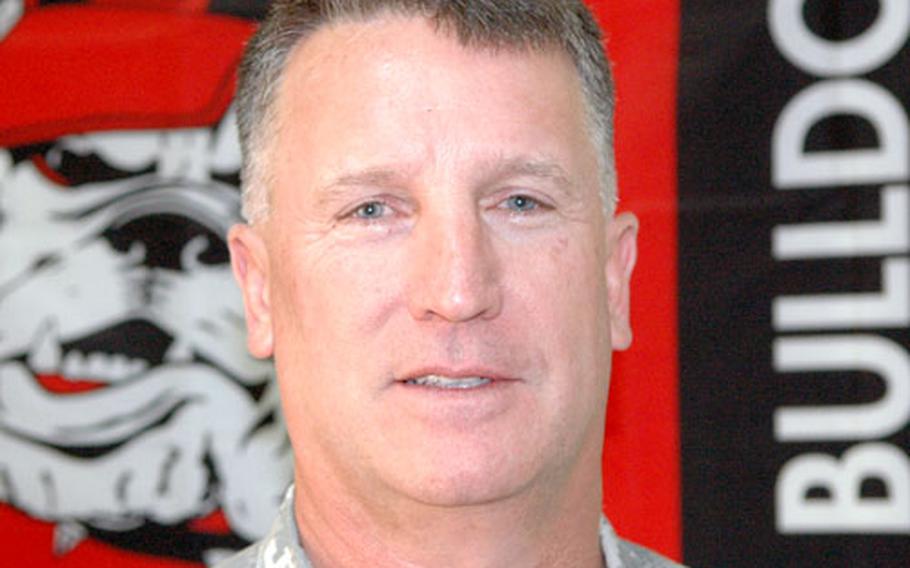 Now, as Tatum and more than 4,000 fellow members of the 48th Brigade Combat Team prepare to return home to Georgia in less than two months, soldiers are reflecting on a deployment that took them through Iraq&#8217;s bloodiest and most peaceful territories. Most say they will be happy to return home and never return &#8212; except maybe as tourists some 20 years from now &#8212; while a small group has decided to stay on and join the active Army.

The unit began its tour 10 months ago in the notorious &#8220;Triangle of Death,&#8221; patrolling insurgent strongholds to the west and south of Baghdad. The unit, whose lineage dates to the Civil War and the Confederacy, experienced heavy losses in those early months as guardsmen found themselves battling roadside bombs and insurgent gunmen daily.

By fall, however, the bulk of the 48th was relocated to southern Iraq, on the peaceful outskirts of Nasiriyah, where it focuses on convoy security and civil affairs missions.

After seeing more than two dozen soldiers killed in areas like Latifiyah, Mahmudiyah and Yusafiyah &#8212; known as the &#8220;Fiyahs&#8221; &#8212; soldiers say the calm of southern Iraq is more than welcome.

Tatum, a field artillery observer, spent the first portion of his deployment calling in howitzer shells against mortar-launching insurgents in the lush-canal-veined &#8220;Fiyahs.&#8221; Now, as the civil-military operations officer for the 1st Battalion, 108th Armor Regiment, 48th BCT, Tatum is busy overseeing public works projects such as the construction of water pumping stations, schools and medical clinics near Camp Scania.

The unit was the first in Iraq to wear the new Army Combat Uniform. (Soldiers complained that the suits promptly fell apart at the seams, so modifications were made based on the 48th&#8217;s feedback.) The unit was also the first to have a single media organization embedded with it for its entire deployment. The Atlanta Journal-Constitution has watched and reported on the 48th every step of the way.

The hard lessons, according to 48th officers, came during their first months of deployment.

The captain said he and his unit learned the hard way that there was no way for his company to successfully secure that much area. Amid a maelstrom of roadside bomb attacks, the unit lost eight soldiers in two roadside bomb blasts within a week&#8217;s time.

From that point on, the unit focused on controlling a much smaller portion of the territory and gradually enlarged it. Along with that, commanders added the regular use of helicopter insertions of soldiers and tactics similar to those used by artillery units, except involving small arms and grenades.

During patrols, soldiers would fire into pre-approved, nonpopulated areas, such as canals and abandoned buildings, known at times to shelter insurgents. Even if no insurgents were there at the time, the fire served as a deterrent, Lassetter said. The shooting missions also helped motivate soldiers.

The overall strategy of controlling a much smaller area, but controlling it completely, had a major impact on the locals. It was the first time any of them had seen U.S. soldiers secure a portion of the area and not have it repeatedly occupied by insurgents.

&#8220;It was amazing to watch the different attitude among the local people,&#8221; Lassetter said. &#8220;At first, they were afraid to talk to us, but then they started to cooperate when they saw we had created areas that were secure and safe.&#8221;

During the 48th&#8217;s time in Iraq, the brigade&#8217;s commander said he now believes that Army National Guard units are uniquely suited to the combined &#8220;hearts-and- minds&#8221; and combat missions that soldiers face here.

&#8220;The National Guard units are much better suited to the work going on here now than the active Army,&#8221; said Brig. Gen. Stewart Rodeheaver. &#8220;The average age in the active Army is 22 or 23 years old, and a lot of their life experience comes from high school and AIT (advanced individual training).

Rodeheaver, 53, said he&#8217;s been very pleased with the performance of 48th soldiers in the past year.