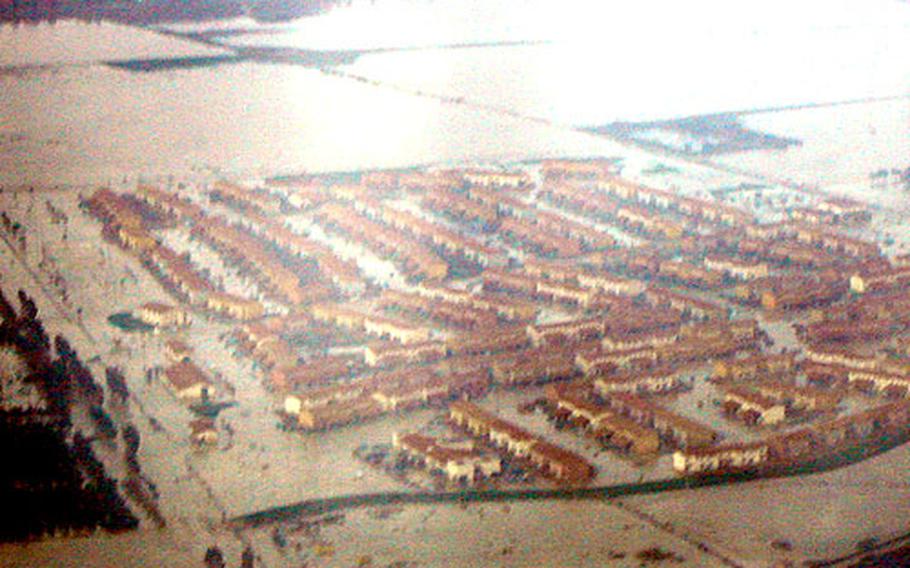 The military housing complex of Maranai at Naval Air Station Sigonella, Sicily, was evacuated Thursday morning after days of heavy rain and thunderstorms flooded the area, which sits in a valley. The complex houses about 475 families, all of whom were safely moved to area hotels. Some houses had up to 3 feet of water inside, officials said. (Photo courtesy of U.S. Navy)

In spite of flooding that trapped about 475 families overnight in their U.S. military base housing &#8212; without running water, sewage, electricity or safe passage off post &#8212; no one was hurt in the devastation that hit Naval Air Station Sigonella, a base on the Italian island of Sicily, officials said.

Photographs of the waterlogged Maranai housing complex and the surrounding areas conjured up images of the devastation that followed Hurricane Katrina &#8212; and U.S. Navy officials&#8217; fears of possible catastrophe.

However, Rear Adm. Noel Preston, commander of Navy Region Europe, said Thursday after assessing the damage that swift response and the base&#8217;s preparedness allayed those fears.

The flooding was a result of unpredicted rains that began around 1 a.m. Sunday and did not let up until Wednesday morning.

Starting about 8 a.m. Thursday, 19 buses evacuated everyone from Maranai, taking them to various hotels in safer areas, base commander Capt. Joe Stuyvesant said.

By Friday, Stuyvesant anticipates the NAS II base to be at 75 percent of its operational capability &#8212; primarily having the two runways up and running, he said. Flights might happen only during the day, however, since runway lights were submerged and officials have yet to test if they work.

On Wednesday, floodwaters swept away vehicles, and sailors from the Explosive Ordnance Disposal Mobil Unit 8 had to rescue a sailor and two Italians stranded and &#8220;hanging on a pile of debris,&#8221; Preston reported.

Americans were told to stay put because traveling off base was either too dangerous or impossible because of washed-out roads.

&#8220;The only way to get into [Maranai] was in a Humvee with snorkel kits. Other people in the Humvees were wearing wet suits, and they needed them,&#8221; Preston said during a telephone interview from Sigonella.

Those who needed help or supplies signaled with flashlights, and base officials doled out bottled water, Meals, Ready to Eat, diapers and other supplies, Stuyvesant said.

A pregnant woman went into labor, and was safely taken from NAS II to the base hospital on NAS I, a roughly 30-minute drive in normal conditions. The baby was delivered without complications. As a precaution, about 10 other women in late-term pregnancy were taken to the hospital in case they went into labor, Stuyvesant said.

Base officials and volunteers, including workers from the American Red Cross and Navy-Marine Corps Relief Society, quickly staged support services for residents. They provided everything from food and water, baby food and baby formula, to cots and blankets. Legal personnel were on hand to help residents begin the process of recouping lost items.

NAS I, which houses the Navy Exchange, commissary and hospital, is fully operating, although the schools there were closed Wednesday and Thursday because of unsafe roads.

Mineo housing was not affected by the flooding.