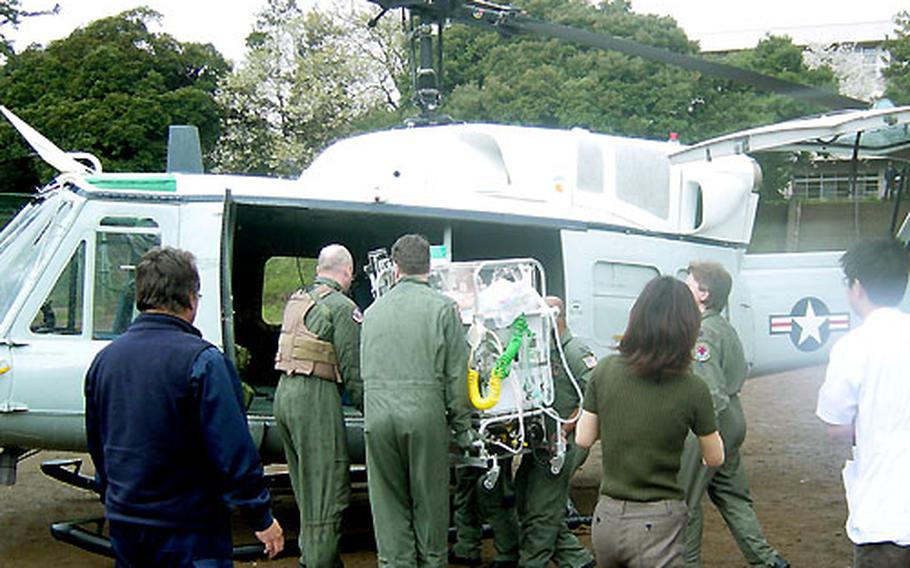 Members of Yokota Air Base’s 459th Airlift Squadron, who landed a UH-1N Huey on this baseball field in Yokohama, Japan, load an incubator holding an infant in need of medical care in the States. (Wesley Simpson / USAF)

YOKOTA AIR BASE, Japan &#8212; The request for airlift was anything but routine: Pick up a critically ill newborn at a baseball field in Yokohama and transport the baby to this base west of Tokyo.

Yokota&#8217;s 459th Airlift Squadron typically hauls distinguished visitors in its fleet of UH-1N Hueys. On occasion, its helicopters perform aeromedical evacuation, but never, until April 8, from a Japanese ball field.

Details of the infant&#8217;s illness were not available and the parents were unavailable for an interview.

After reviewing the newborn&#8217;s clinical data, the TPMRC-Pacific flight surgeon categorized the mission as urgent: The baby had to be airlifted within 24 hours.

Now, the hard part: how to get the infant, its 180-pound incubator and a team of neonatal specialists across the Pacific Ocean immediately.

Because of the electrical configurations of the KC-135 and KC-10, those aircraft could not perform the medevac mission. And the C-5, with its airframe, was too small for the raised incubator on wheels. A C-141, however, was in the Pacific theater and TPMRC&#8217;s Staff Sgt. Carlos Limo, a duty controller, reserved it.

Meanwhile, the same day the call came in, specialists from Camp Lester&#8217;s neonatal intensive care unit hopped a ride to Yokota aboard a C-9, which was scheduled to stop on Okinawa.

The pieces for the trans-Pacific mission were in place, except the infant was in Yokohama. Since the three-hour ambulance ride to Yokota was ruled out because of her health and other issues, TPMRC-Pacific called on the 459th.

When it comes to finding a spot to land, the Huey and its pilots aren&#8217;t picky. The surface needs to be flat, with about 100 square feet of space, said Capt. David Eidsmoe, a Huey pilot.

That&#8217;s all Eidsmoe, Capt. Gary Lavers, the co-pilot, and Tech. Sgt. Wes Simpson, the flight engineer, had to go on to find the baseball field April 8.

Eidsmoe was familiar with the area and found it by searching for landmarks.

Williams, the Huey flight scheduler, had to get, through 5th Air Force, permission from Japan for the helicopter to land in the field.

A Japanese ambulance took the baby to the Huey, and in 20 minutes, the infant arrived safely at Yokota, where the C-141 was waiting to take it and its parents to a children&#8217;s hospital in California. The neonatal team and crewmembers of Yokota&#8217;s 374th Aeromedical Evacuation Squadron were also on the flight.

For TPMRC, the mission was routine.

Last month the TPMRC coordinated the first airlift in the Pacific of a patient with severe acute respiratory syndrome. A boy, 10, was evacuated from Ho Chi Minh City, Vietnam, to National Taiwan University Hospital in Taipei. TPMRC had no word on how he was doing.