458th's engineers prove themselves useful for any task in Iraq 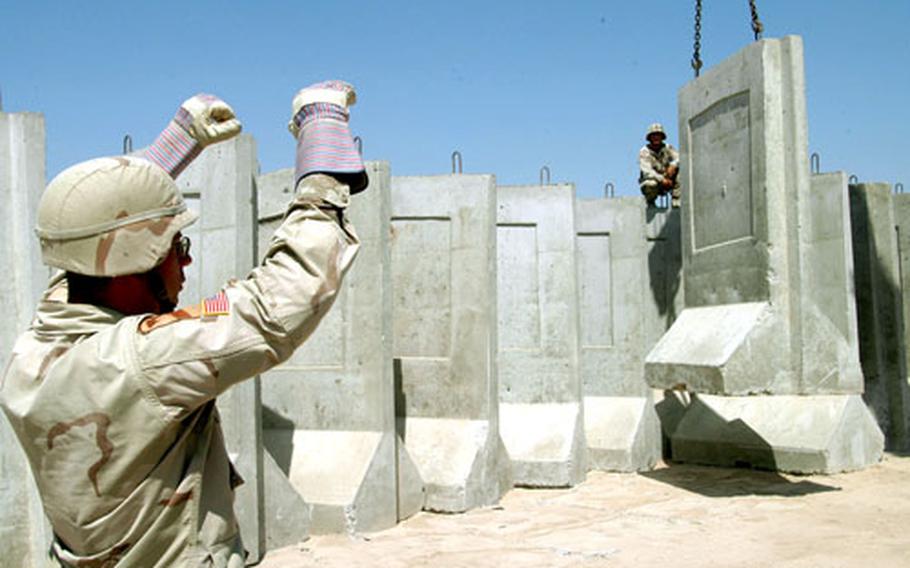 Spc. Matthew Fox, left, signals to move a concrete barrier after Spc. Sean Stivason hooked the barrier to a crane at Camp Victory, near Baghdad. The two soldiers are from the 458th Engineer Battalion at the camp. (Enes Dulami / S&S)

Spc. Matthew Fox, left, signals to move a concrete barrier after Spc. Sean Stivason hooked the barrier to a crane at Camp Victory, near Baghdad. The two soldiers are from the 458th Engineer Battalion at the camp. (Enes Dulami / S&S) 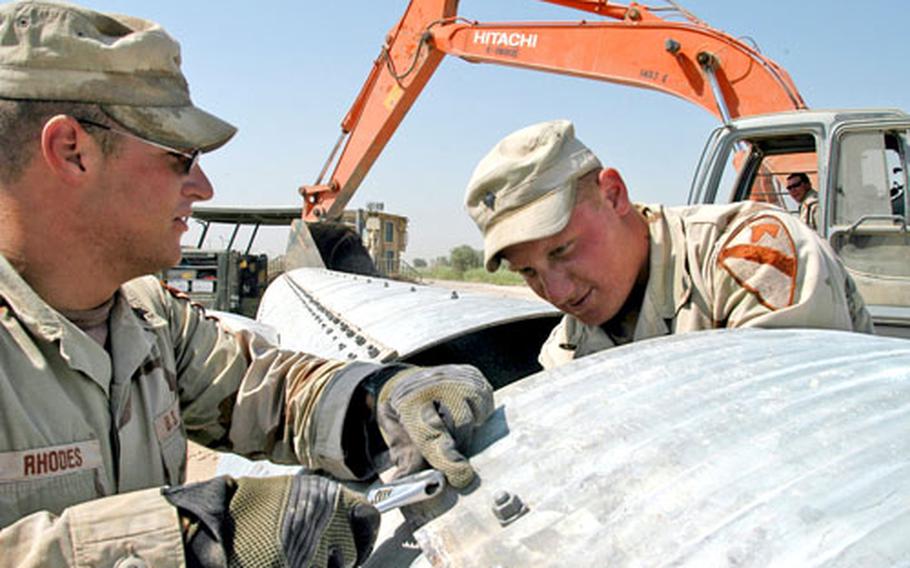 Spc. Matthew Rhodes, left, and Spc. Christian Kessler work to hook together lengths of drainage pipe on Camp Victory. The pipe was eventually used under a new roadway along the camp&#39;s perimeter. (Enes Dulami / S&S)

That may be a stretch, but members of the Army Reserve combat engineer battalion based in Johnstown, Pa., have definitely gotten around since they arrived earlier this year.

The 458th&#8217;s soldiers have searched and cleared improvised explosive devices from more than 9,000 kilometers of Baghdad-area supply routes, transported more than 83,000 rounds of captured ordnance for destruction, and placed more than 12,000 concrete or dirt-filled barriers around the city for either facility protection or the random road checkpoints that the division&#8217;s brigade combat teams set up.

They have also left their lasting mark, joining with other engineer units to renovate a mile stretch of Abu Nuwas park on the Tigris River in central Baghdad.

The battalion also has a heavy rescue mission, providing a quick response team to find survivors in bombed or collapsed buildings.

Of their 500-plus soldiers deployed to Iraq, 55 percent came from other reserve units, coming to the battalion within 45 days of deploying.

&#8220;We lost 129 soldiers to Operation Iraqi Freedom I,&#8221; said battalion commander Lt. Col. Dave Chesser about the need for the additional soldiers.

Roth said they have soldiers from nearly all 50 states and every one of the Army&#8217;s reserve regional readiness commands.

A handful of those who deployed to OIF I returned for the battalion&#8217;s current deployment.

One of those returning is 1st Lt. Noel Milian. He deployed to Kuwait last year with a unit of road builders.