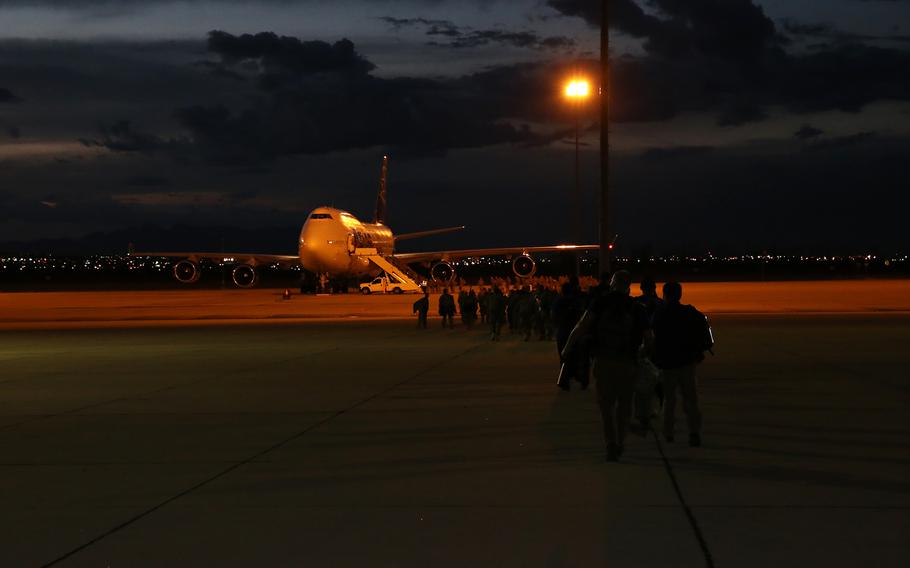 Soldiers board a flight to U.S. Central Command for a deployment in support of Operation Spartan Shield June 1, 2016. (ISMAEL ORTEGA/U.S. Army)

SAN ANTONIO — More than 450 soldiers of the Virginia and Maryland National Guard are slated for a deployment to the Middle East, Guard officials said Wednesday.

Soldiers from both states, which make up the famed 29th Infantry Division, will provide mission command for 18,000 troops of Operation Spartan Shield and theater security cooperation in the U.S. Central Command area of responsibility, the division said in a news release.

That area includes North Africa, the Middle East and Central Asia, where U.S. troops are engaged in everything from drone strikes in Yemen, a resurgent Taliban in Afghanistan and ramped up operations during the battle for Mosul in a bid to oust the Islamic State group from its stronghold in Iraq.

The deployment will mark the largest number of troops that the division has led since World War II, the release stated.

The Fort Belvoir, Virginia-based soldiers will train in Texas after their Oct. 30 departure ceremony, and then will move on to the Middle East, the release stated.

National Guard soldiers are taking on a more active role in theater support command. Soldiers from the headquarters staff of the Texas-based 36th Infantry Division are deployed now to Afghanistan.

The division is notable for its service in World War I, and then later in World War II, when its soldiers were among the first wave to take Omaha Beach during the Normandy amphibious assault in 1944.

Operation Spartan Shield is an ongoing mission to keep forces ready for contingency operations in the area while conducting joint exercises with partner nations, the release stated.