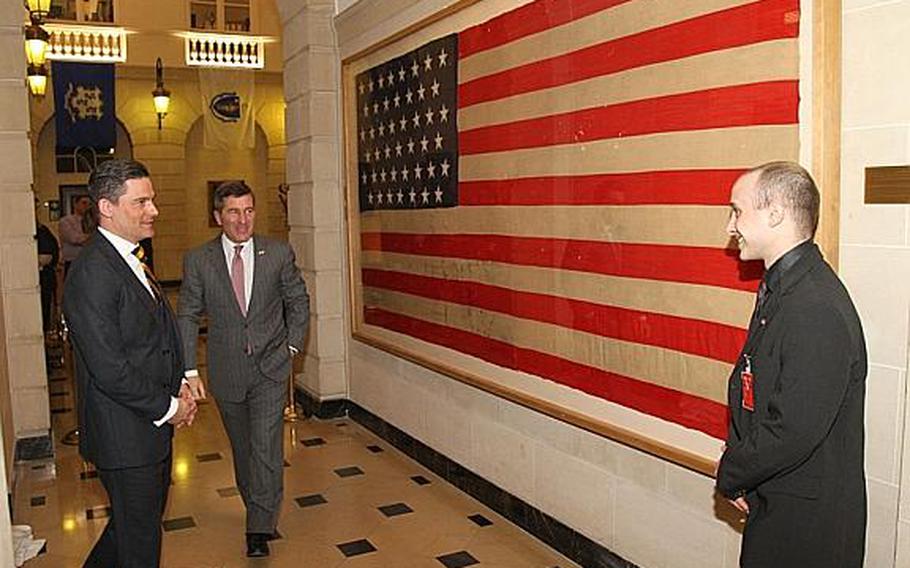 Jean-Baptiste Lapierre stands next to the American flag he donated to the U.S. Embassy in Paris, fulfilling a promise he made to his grandmother to return the flag to American hands. A U.S. soldier gave the flag to Lapierre's grandmother during the liberation of Paris in 1944. On Monday, the flag was unveiled during a ceremony at the embassy. U.S. Ambassador to France Charles H. Rivkin, center, made remarks during the ceremony. At left is Denis Galipeau of the U.S. Defense Attache's Office. (Courtesy of U.S. Embassy)

STUTTGART, Germany — Jean-Baptiste Lapierre’s grandmother never forgot the U.S. soldier who gave her the blood-stained American flag: It was 1944 and Paris had just been liberated.

“My grandparents were in the French Resistance during the liberation and a U.S. soldier gave the flag to my grandmother,” said Lapierre. “The soldier said he fought at Omaha Beach and had the flag with him since then.”

For nearly 70 years, the 12-foot-by-8-foot flag was hidden away in a closet for safe keeping in the family’s Paris home, a treasured keepsake from the war years.

However, it was never the family’s intention to hold onto the flag forever, but to return it to American hands.

“Before my grandmother’s death she made me swear I would return it to the rightful owner,” said Lapierre, 26.

On Monday, the flag was unveiled in the lobby of the U.S. Embassy in Paris, where it is expected to be a permanent fixture for years to come. With no clue how to find the nameless soldier who gave the flag to his grandmother all those years ago, donating the flag to the embassy was the next best thing, Lapierre said.

“This flag has returned home,” said U.S. Ambassador to France Charles H. Rivkin, whose remarks during the ceremony were provided by embassy staff. “But this is not the end of its journey. When people pass it 100 years from now, right here, in this very place, they’ll still remember the bond that forever ties the French and the American people.”

However, the origin of the flag, which has just 45 stars, remains something of a mystery.

It is stamped “US ARMY Standard” and on the back there is a hand-written message in French: “1944-1948 The holes in this flag are from a German machine gun, in the evening prior to the liberation by our American friends and the soldiers of the (French) 2nd Armored Division. Vive l’Amérique; Vive La France. Paris XVIII.”

According to what Lapierre’s grandmother was told by the American soldier, the flag was first carried into France aboard one of the ships involved in D-Day, the surprise beach-storming attack that helped turn the tide of war against the Germans.

Whether that soldier’s story was true is impossible to say. The 45 stars on the flag suggest it was likely made when the U.S. had just 45 states — between 1896 and 1908.

Regardless of its history, the flag serves as a symbolic reminder of the war and the long-standing alliance between the two nations, Rivkin said.

“The journey of the flag we unveil today starts a little over 100 years ago somewhere in America,” Rivkin said during the ceremony. “We don’t know who brought it during War World II, why it was left behind, and whose blood was spilled on it. But here’s what we know about this flag: a French family watched over it all these years, passing it from one generation to the next, the same way the friendship between our two countries has been transmitted across time.”

Lapierre, whose grandmother died in 2002, inherited the flag when his father died last year. Lapierre said he considered keeping the flag for himself, but in the end he knew he had to honor his promise to his grandmother.

“I didn’t expect the flag would create such an event. I’m very touched,” Lapierre said through a translator shortly after the flag’s unveiling at the embassy. “My grandmother looking down would be very proud.”