44th Signal Battalion leaves Mannheim for a year in Afghanistan 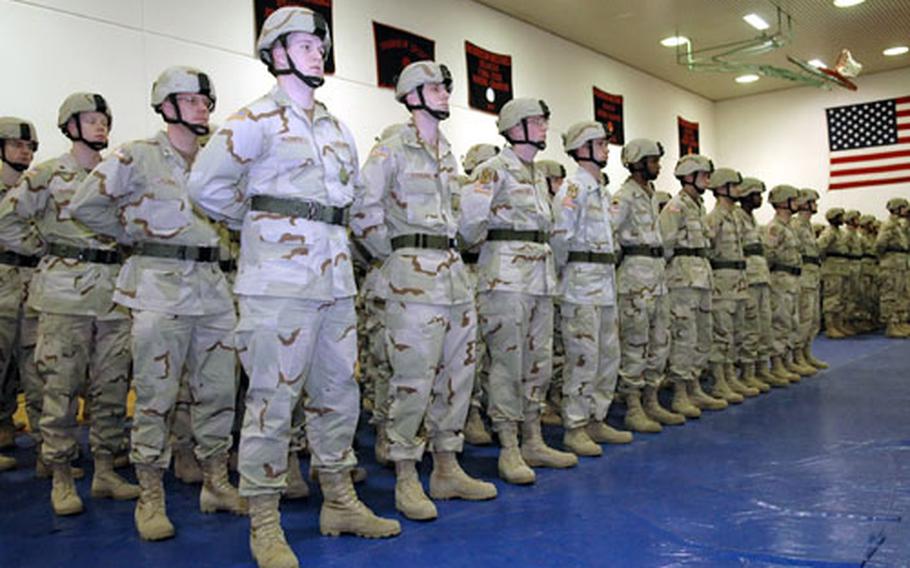 Soldiers of the 44th Signal Battalion stand at parade rest in formation at a deployment ceremony in Mannheim, Germany on Wednesday. (Raymond T. Conway / S&S)

Soldiers of the 44th Signal Battalion stand at parade rest in formation at a deployment ceremony in Mannheim, Germany on Wednesday. (Raymond T. Conway / S&S) 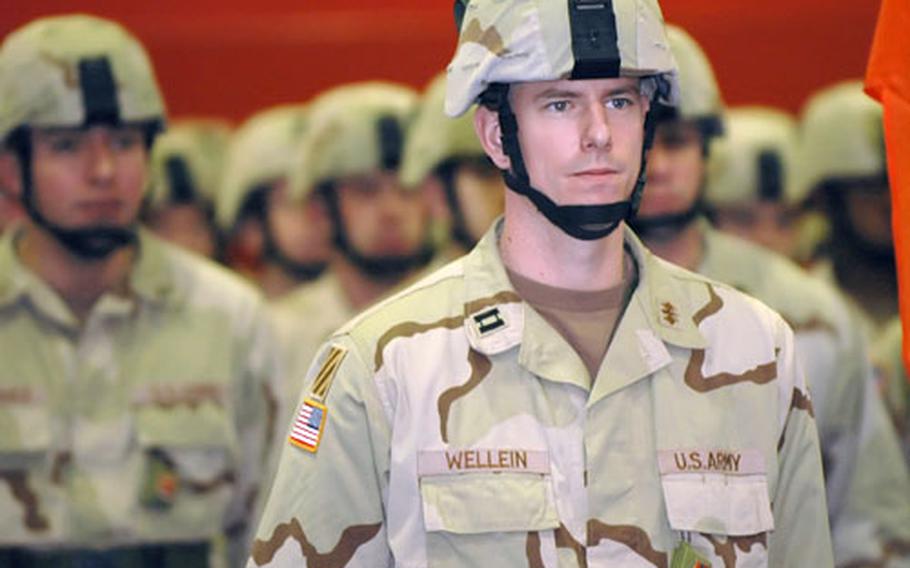 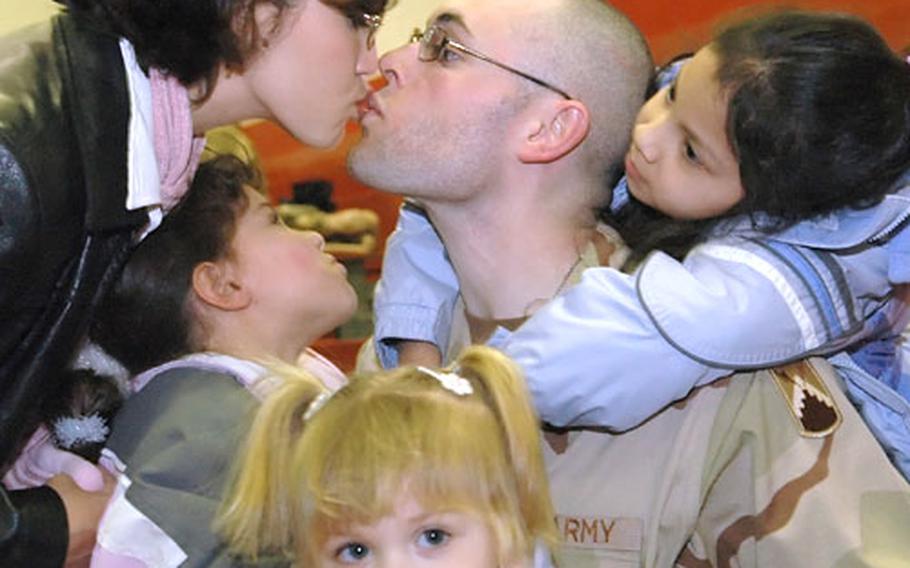 Connie Cart leans over daughter Alaina to give her husband, Sgt. Jason Cart, a kiss while daughter, Jayci, 2, seems distracted at a deployment ceremony for the 44th Signal Battalion in Mannheim, Germany on Wednesday. At right is Alaina&#39;s best friend, Marie. (Raymond T. Conway / S&S)

MANNHEIM, Germany &#8212; The bleachers in the old gymnasium rattled as the crowd rose to join the departing soldiers in a spirited rendition of the Army song.

As mass, amateur performances go, it was pretty good, certainly loud and clear enough to hear the familiar refrain: &#8220;You will always know, that the Army goes rolling along.&#8221;

Like many military communities these days, Mannheim has been riding the deployment cycle for some time. Soldiers come and soldiers go, families stay, and the balancing act begins anew.

On Wednesday, members of the 44th Signal Battalion rolled up their guidon at a brief farewell ceremony. About 225 soldiers are deploying to Afghanistan for a yearlong stint.

Meanwhile, the community has been organizing a welcome home and retreat ceremony for the 7th Signal Brigade, which returned in November after an 11-month stint in Iraq.

The event is more of celebration than anything else, with music, food and drinks on tap.

Wednesday&#8217;s send-off for the 44th Signal Battalion lacked the immediacy of other separations. None of the soldiers who participated in the afternoon ceremony left home to catch a flight.

Some are due to depart as early as this weekend, while others won&#8217;t leave until late March.

In addition to Grafenw&#246;hr and Hohenfels, the signal battalion traveled to France this past year to hone its skills for the deployment. The unit was in Normandy in June, providing communication links in support of ceremonies marking the 60th anniversary of the D-Day landings.

Honor and tradition were among the themes raised at Wednesday&#8217;s ceremony.

Remember those who have served, or are serving, Col. Jennifer Napper, the brigade commander, said in her remarks to the troops.

Though the 44th has been one of the busiest units around, and the road ahead may &#8220;become hard and tedious&#8221; at times, Napper said the troops would not tire.

Vernetta M. Lewis, the battalion&#8217;s command sergeant major, gave a rousing speech in which she noted how hard the unit trained, sometimes in the rain and cold, snow and ice. &#8220;We trained, and sometimes we were drained, tired and [functioned on] limited sleep.&#8221;

Given all the training and preparations, Lewis said, the battalion &#8220;stands on a solid foundation.&#8221;

The road to Afghanistan will come early for Staff Sgt. Juan Guevara.

He&#8217;s slated to leave in the next couple of days. The deployment will be Guevara&#8217;s third in five years.