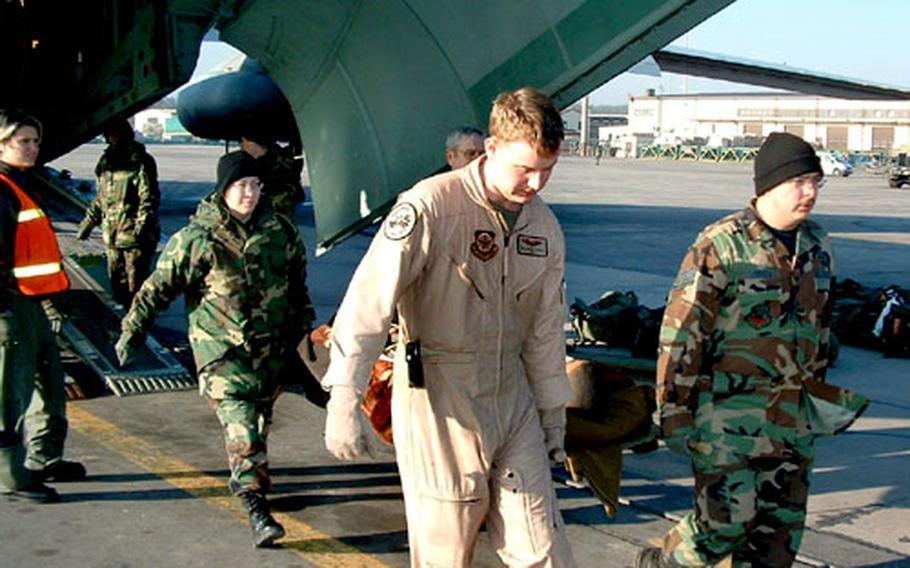 Members of the 435th Contingency Aeromedical Support Facility (CASF) at Ramstein Air Base, Germany, carry an injured servicemember off a medevac plane. Injured troops are taken to the facility before being transported to Landstuhl Regional Medical Center for further treatment. (Photos courtesy of U.S. Air Force)

Members of the 435th Contingency Aeromedical Support Facility (CASF) at Ramstein Air Base, Germany, carry an injured servicemember off a medevac plane. Injured troops are taken to the facility before being transported to Landstuhl Regional Medical Center for further treatment. (Photos courtesy of U.S. Air Force) 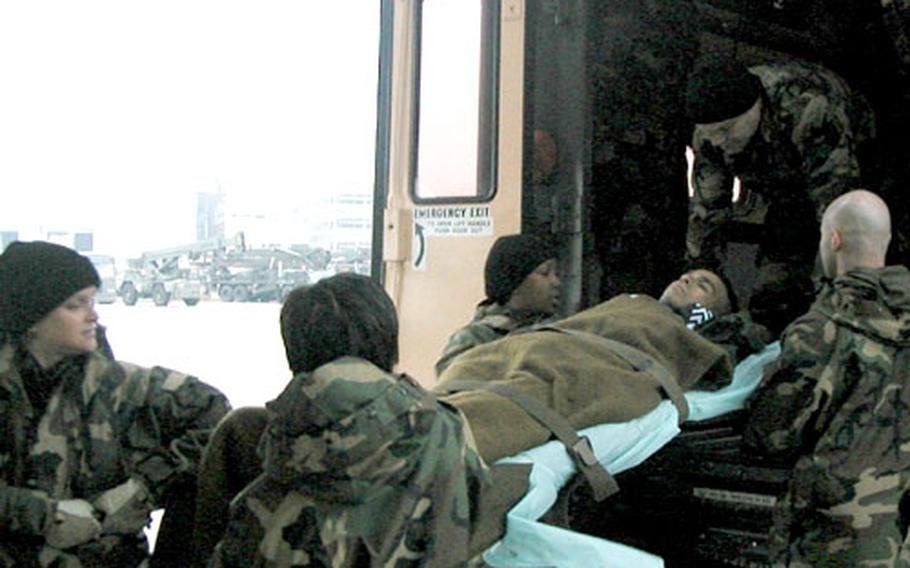 The CASF’s airmen, loading an injured servicemember onto a bus for transport, are currently working in a building leased by a German company while a more permanent home is being built. ()

RAMSTEIN AIR BASE, Germany &#8212; A little construction won&#8217;t slow down the members of the 435th Contingency Aeromedical Support Facility.

The airmen &#8212; who moved to their current location in December &#8212; are waiting for Ramstein officials to build them a more permanent home.

&#8220;The [base is] going to do some heavy remodeling,&#8221; said Lt. Col. Richard Reusch, aeromedical support facility flight commander. &#8220;You&#8217;ve got to work around the construction, but that&#8217;s kind of a fundamental thing here at Ramstein. There will always be construction wherever you are.&#8221;

The 435th CASF, made up of roughly 50 percent active-duty airmen and 50 percent reservists, is in charge of moving injured servicemembers from Ramstein&#8217;s flight line to Landstuhl Regional Medical Center for treatment.

Following treatment, the patients return to the CASF, where the 435th&#8217;s flight surgeons, nurses, medical technicians and administrative specialists prepare them for flights out of Germany.

From March until December of last year, the facility was located in Ramstein&#8217;s southside gym. In December, the group moved into a temporary 12,000-square-foot modular facility across the street. The facility is under lease from a German firm until the end of this year.

The current building has 60 beds and can hold up to 100. There are offices for flight surgeons, nurses, an observation room, pharmacy, logistics/supply room, an in-processing room and a United Service Organizations lounge.

In 2003, the CASF was responsible for 24,585 patient movements in and out of Ramstein. More than 90 percent of the patients were casualties from Operation Iraqi Freedom or Operation Enduring Freedom.

So far this year, the 435th has conducted more than 120 missions, transferring more than 1,384 patients on flights in and out of Ramstein.

&#8220;We go and recover the inbound flights that come from downrange and some other places,&#8221; said Air Force Capt. Glenda Hayes. &#8220;Sometimes, they come from the European theater, sometimes Africa, and we cover all of them and take them to Landstuhl, usually.&#8221;

Plans to renovate the aeromedical squadron facility&#8217;s original building next door will begin prior to the end of the lease.

Construction of a driveway off of Harmon Avenue for CASF buses is currently under way. At present, buses on their way to and from the flight line, have to be backed out onto the street, causing severe traffic tie-ups.

A parking area for the buses is also planned for the lot where the modular building now stands.