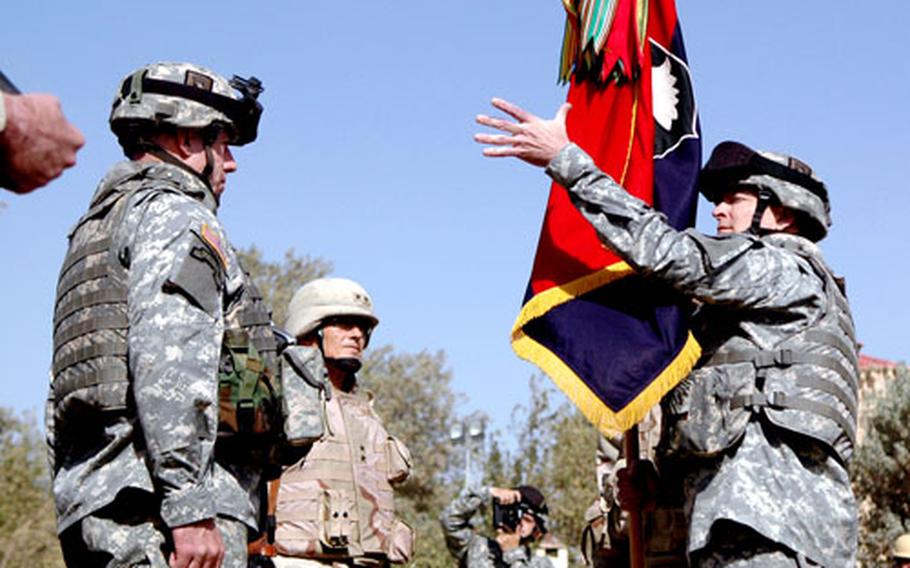 Attendees and leaders praised the progress that has been made since the 42nd ID, a New York Army National Guard unit, took control of the area in February.

&#8220;The mission has been executed brilliantly,&#8221; said Lt. Gen. John Vines, commander of the XVIII Airborne Corps and Multi-National Corps-Iraq. &#8220;To the men and women of Task Force Liberty, I thank you for a job brilliantly done.&#8221;

While in theater, the division made significant changes by: increasing the Iraqi Army units stationed locally to 18 brigades; closing 10 forward operating bases including FOB Danger, the former headquarters; and finding and arresting scores of insurgents.

The 101st, he said, arrived in the area in recent weeks and are &#8220;already out there shaking hands and putting their arms around people. They&#8217;re going to have to take a little time to build up a relationship with Iraqis.&#8221;

Taluto said he feels that security will improve as more locals stop tolerating violence and begin to participate in the political process.

He also said he felt that increased Iraqi involvement in security and political spheres would portend peace.

Iraqi Army Gen. Abdul Jabar, a lifetime resident of the Tikrit area, said he felt the Iraqi Army would soon be up to the challenge of providing security in the area.

A slew of local leaders &#8212; including governors from four provinces and prominent Iraqi Army officials &#8212; attended to welcome the 101st and bid farewell to the 42nd. After the ceremony, Taluto was all but drowned under a sea of intricate carpets, decorative plates, pieces of art and effusive shows of affection pressed upon him by Iraqi leaders.

Incoming Maj. Gen. Tom Turner, commander of the 101st and Task Force Band of Brothers, expressed optimism at the prospect of returning to Iraq and working with local leaders.