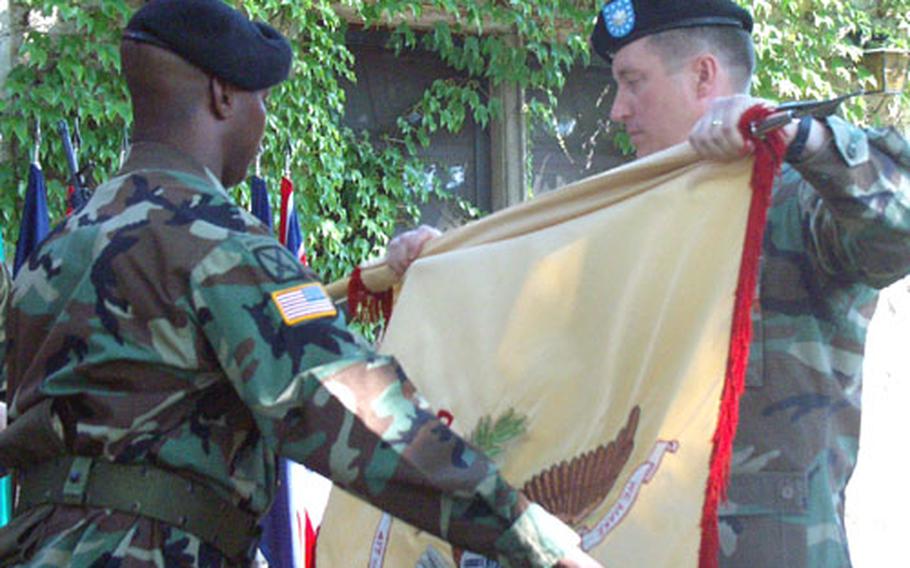 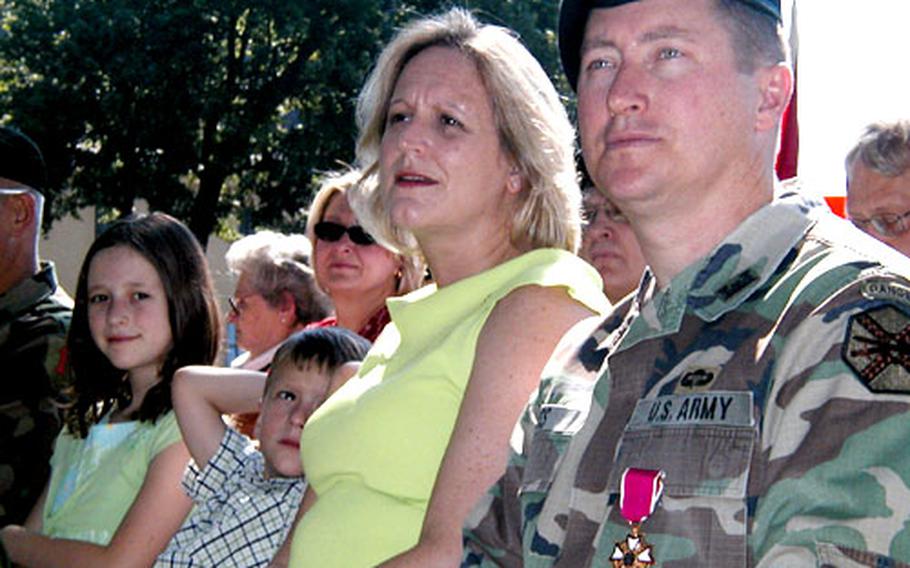 Newly decorated with the Legion of Merit for meritorious service to the United States, retiring Lt. Col. Thomas Fass; his wife, Tracy; and children Connor and Michelle look on during the transfer of authority of his command during a deactivation ceremony for his command, the 417th Base Support Battalion. (Steve Liewer / S&S)

KITZINGEN, Germany &#8212; The Army&#8217;s largest base support battalion in Europe deactivated Friday, bidding its retiring commander farewell as it merges into what will become the new &#8220;U.S. Army Garrison Franconia.&#8221;

The Kitzingen-based 417th Base Support Battalion became the first of four BSBs to merge with their parent command, the 98th Area Support Group of W&#252;rzburg, Germany, to form the new garrison. The other three BSBs &#8212; the 235th in Ansbach, the 279th in Bamberg and the 280th in Schweinfurt &#8212; will case their colors shortly after the merger takes full effect Oct. 1, said Don Klinger, a 98th ASG spokesman.

Col. Russel Santala, the ASG commander, said the merger will cause no cuts in the civilian work force or change in community services.

Less clear is the new garrison&#8217;s long-term future. The U.S. Army Europe commander, Gen. B.B. Bell, has not placed any units in the 98th ASG on his list of bases that will remain open under USAREUR&#8217;s transformation plan. However, Gen. James L. Jones, head of the joint European Command, has said publicly that Ansbach and Illesheim will survive to host an aviation battalion.

That would leave little for the garrison to manage.

The deactivation ceremony also served as a retirement party for Lt. Col. Thomas Fass, the outgoing commander, who is retiring after 21 years of Army service.

During his tenure, Fass&#8217; 417th BSB was picked first among bases in Europe and second in the world in the 2004 Army Community of Excellence program, which resulted in extra funds for community improvements. His command also supported 1st Infantry Division families during the unit&#8217;s 2004-2005 deployment to Iraq. Fass and his wife, Tracy, plan to move to Tampa, Fla., where he will work as a civil engineer.