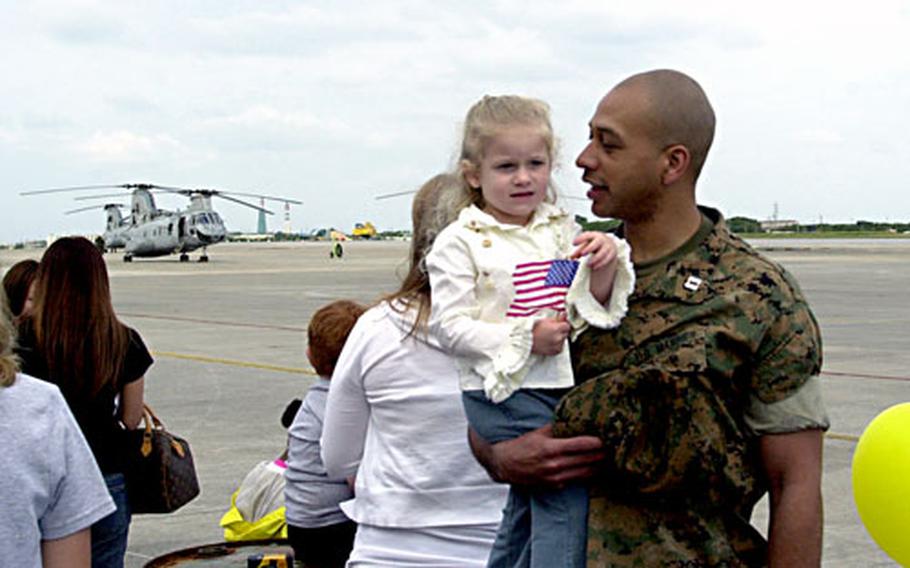 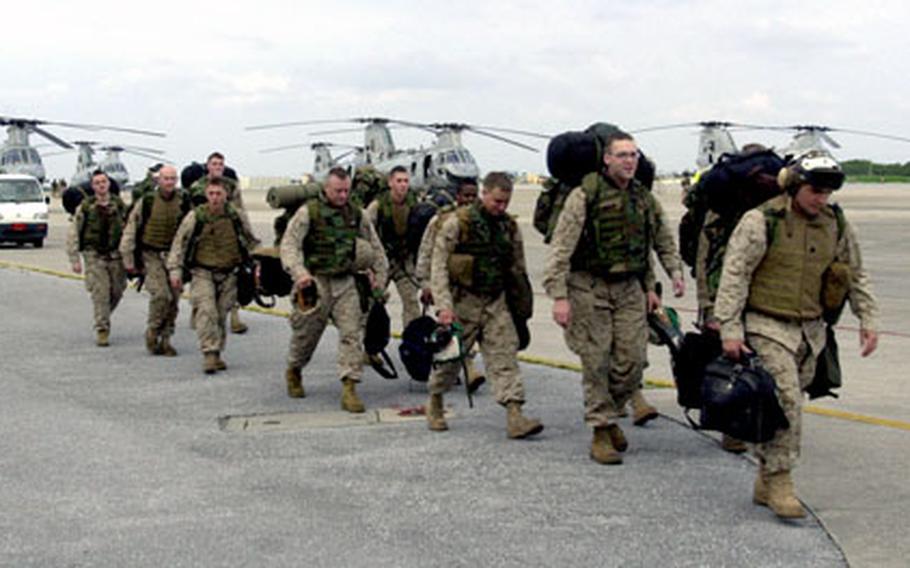 Members of Marine Medium Helicopter Squadron 265 arrive Friday at Marine Corps Air Station Futenma on Okinawa, completing a return voyage from Iraq where they had been deployed for six months. (Erik Slavin / S&S) MARINE CORPS AIR STATION FUTENMA, Okinawa &#8212; The return of the 31st Marine Expeditionary Unit&#8217;s air component Friday morning kicked off a busy weekend for the island&#8217;s Marine and naval bases, with about 1,700 servicemembers expected to arrive by sea Saturday.

Marine Aircraft Group 36 set up the &#8220;welcome wagon&#8221; for the arrivals, complete with a barbecue and support from Marine Corps Community Services, the USO and the Key Volunteer Network, among others.

Two of the unit&#8217;s Sea Stallions landed at Kadena Air Base for transport to Hawaii on Friday, while another flew to Marine Corps Air Station Iwakuni.

The 31st MEU left in August, training in Kuwait and the Persian Gulf before deploying to the western Al Anbar province of Iraq in October. The MEU&#8217;s 2,200 servicemembers were joined by task-force members from other units, swelling the unit&#8217;s ranks to more than 5,000 Marines and sailors.

The unit suffered dearly at times, with 50 Marines killed and another 221 injured. Several of the dead were Hawaii-based Marines who died in a helicopter crash while attached to the unit.

One Marine who attended a funeral ceremony in January for the fallen said: &#8220;There wasn&#8217;t a dry eye aboard. You feel for the families of those lost and for their friends.&#8221;

The reality of combat &#8212; and the long separation it brings &#8212; was fully evident among many of the returning Marines&#8217; spouses, who broke down in tears of joy as their loved ones walked off the runway and into Marine Aircraft Group 36&#8217;s hangar.

Returning Marines were equally elated. Some, like Sgt. Joe Pittman, came back to wives who looked a bit different than when they had left.

Pittman and most other returning unit members will get some time off in the coming days.

The deployment meant big changes for Marine families on Okinawa, as Sgt. Carlos Martinez found out. His wife, Sgt. Christina Martinez, deployed with the unit, leaving him as a single parent for his daughter Abigail, 4.

&#8220;It gives you a whole new level of patience,&#8221; said Carlos Martinez, of the Camp Foster Headquarters and Service Battalion.

After seven months of shouldering the full responsibility of child-raising, all while working long days, Martinez says he is looking forward to getting back to &#8220;normal daily life.&#8221;

Martinez wasn&#8217;t the only one looking forward to a return to normalcy. Every day has its surprises in the desert, said Lance Cpl. Brandon Darke, a helicopter maintenance technician with the Marine Medium Helicopter Squadron 265. Darke&#8217;s biggest source of surprise was one shared by many of the Marines who landed Friday &#8212; the weather.

The return of the 31st Marine Expeditionary Unit&#8217;s air component originally was scheduled to take place Friday afternoon, but it was moved up to the morning in order to avoid a conflict with a ceremony planned at Okinawa International University, said Marine spokesman 1st Lt. Eric Tausch.

In August, a CH-53D Sea Stallion helicopter crashed on the university&#8217;s grounds, damaging an administration building and spurring calls for the closure of nearby Marine Corps Air Station Futenma.

&#8220;The U.S. military is cognizant of local concerns about the safety of Marine Corps helicopters and, like today, will continue striving to respect these concerns,&#8221; Tausch said.