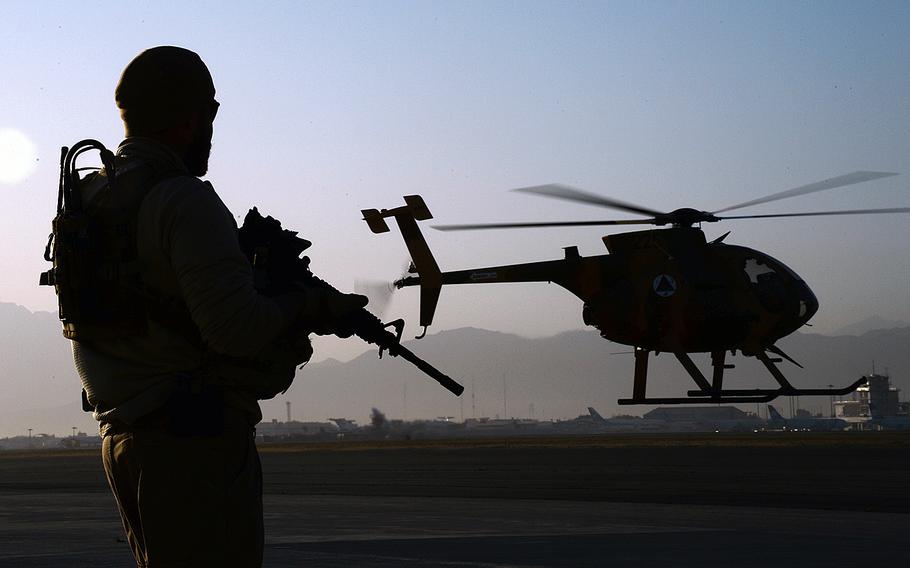 A U.S. soldier provides security while an MD-530 Cayuse Warrior takes off with an all-Afghan crew for a combat mission on Sept. 27, 2015. Taliban militants on Thursday, March 10, 2016, claimed responsibility for an attack on Wednesday that killed four Afghan police officers. (Sandra Welch/U.S. Air Force)

The Taliban claimed responsibility for Wednesday’s attack in the town of Gereshk that began at 6 a.m.

After an 11-hour gunbattle, all 10 attackers, including at least one suicide bomber, were dead, said Omar Zwak, a spokesman for Helmand’s provincial governor.

Four police officers were killed and 12 were wounded, Zwak said.

The Taliban in a post on the group’s website said “a martyrdom seeking unit” entered the district police building and “began engaging the enemy in close combat, killing tens of gunmen.” The Taliban often exaggerate their claims.

The Taliban have made steady gains in Helmand province, a major poppy-growing region, prompting the U.S. to send additional troops to advise and assist Afghan forces.