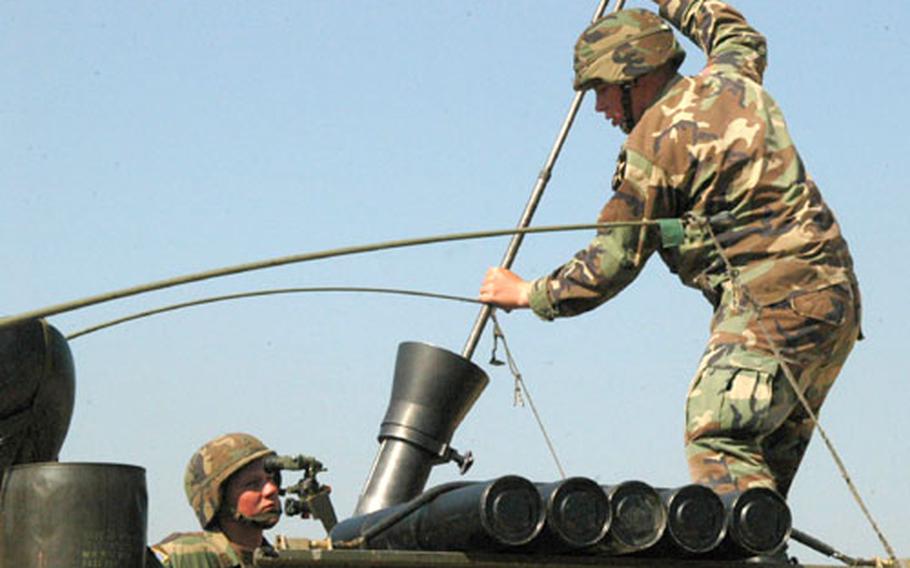 The 4-7, which has been a 2nd ID heavy cavalry asset for more than a decade, is transforming to become a lighter, more deployable force under the command of 2nd ID&#8217;s 1st Brigade, said Maj. Douglas Willis, 4-7&#8217;s operations officer.

Willis, 35, who supervised live-fire Bradley training for the squadron&#8217;s soldiers at Rodriguez Range on Friday, said 4-7 has been through numerous mutations since the days when cavalry rode horses into battle.

The last major change, he said, was in the early 1990s, when the squadron added a third Bradley troop to the existing two ground units and three air troops.

Changing to an armored reconnaissance squadron means the loss of 4-7&#8217;s Kiowa helicopters and M1A1 Abrams main battle tanks, leaving just three ground troops. The ground troops each will consist of two platoons, including three Bradleys and five Humvees. The changes will cut the number of personnel in the squadron by about a third, Willis said.

The squadron&#8217;s Humvees will be fitted with Long Range Acquisition Systems (LRAS), enabling scouts to paint targets on the battlefield for artillery and air strikes, he said.

&#8220;Now we are getting rid of the tanks and helicopters,&#8221; he said. &#8220;Cavalry units are used to the changes in manning and configuration, but the bottom-line missions of reconnaissance and security remain the same, as do the critical tasks associated with those missions.&#8221;

Every few minutes, the Bradley guns would open up, sending bullets flying through the targets and kicking up clouds of dust behind them.

Crews are assessed on their ability to kill the targets, how long it takes and whether they follow the correct procedures, Preler said.

The constant thud of mortars at the far end of the range added realism to the training.

&#8220;Firing off of Manchu Hill into the range is the best place to be. The Bradley crews can hear it and see it. We just can&#8217;t shoot the same targets as them because it would cost too much to repair them,&#8221; he said.

One of the 4-7 Bradley commanders on the range, Sgt. Pedro Montalyo, 26, said he was firing his machine for the first time.

Montalyo said the Bradley was much more powerful than the Humvee he commanded with the 2nd Armored Cavalry Regiment at Fort Polk, La., before coming to South Korea last month.

Bradley gunner Spc. Kevin Proctor, 20, has been in South Korea 16 months but only recently got behind the gun after working as a driver, he said.

The biggest challenge is finding the targets, said Proctor, who enjoys the added responsibility of firing the big gun.

&#8220;They are camouflaged with the surroundings, and there was heat shimmer from the exhaust that made them hard to see,&#8221; he said.

Bradley driver Pfc. Anthony Martino, 19, uses a yoke, similar to that on an aircraft&#8217;s controls, instead of a steering wheel to steer his vehicle.

The sheer size of the machine means there are a lot of blind spots, he said.

When the Bradley is bounding it is important to drive smoothly so the gunner can keep his sight on the enemy, Martino said. In defensive positions, he said it is key to find a flat piece of ground that gives the gunner a good view of the enemy.