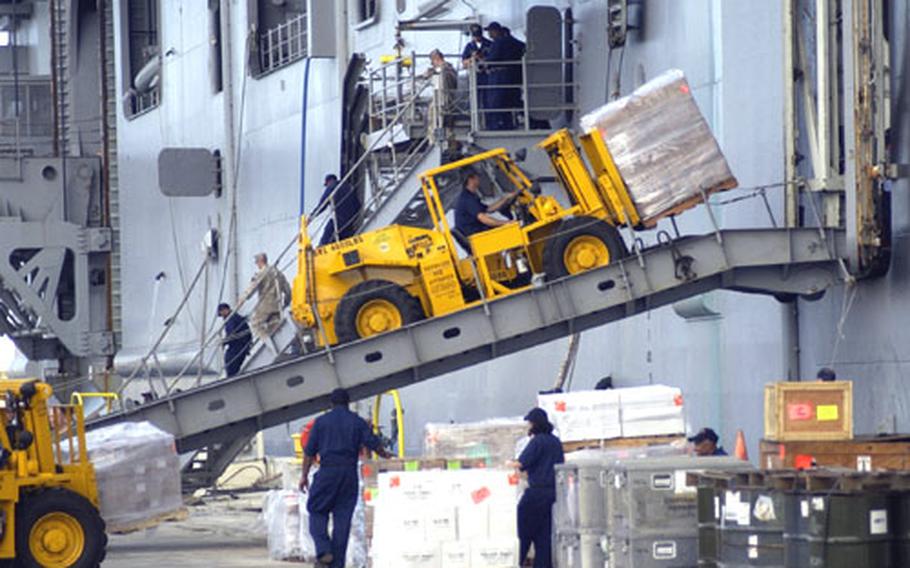 Sailors attached to USS Bonhomme Richard load supplies during a brief stop at Naval Base Guam on Tuesday. The Bonhomme Richard and its embarked Marines were scheduled to spend the New Year’s holiday in port, but instead on-loaded supplies before deploying to assist the victims of the massive earthquake and tsunami that ravaged nations around the Indian Ocean. (Nathanael T. Miller / U.S. Navy)

Sailors attached to USS Bonhomme Richard load supplies during a brief stop at Naval Base Guam on Tuesday. The Bonhomme Richard and its embarked Marines were scheduled to spend the New Year’s holiday in port, but instead on-loaded supplies before deploying to assist the victims of the massive earthquake and tsunami that ravaged nations around the Indian Ocean. (Nathanael T. Miller / U.S. Navy) 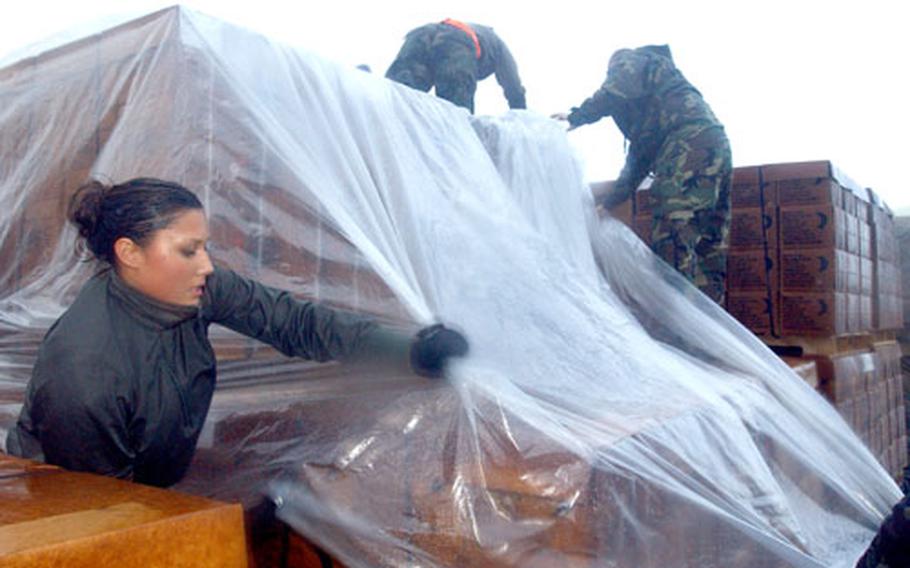 A forward command element along with three assessment teams are on their way to Utapao, Thailand, to establish the command, control and communication structure for Joint Task Force 536, which will be headed by Lt. Gen. Robert R. Blackman, commander of the Okinawa-based 3rd Marine Expeditionary Force.

PACOM officials plan to use the Thai military facility at Utapao as a regional support center for emergency and medical personnel providing assistance throughout the region. It&#8217;ll also serve as a staging area for U.S. military and rescue aircraft, forensic experts and other relief assistance &#8212; with supplies being funneled out of Utapao to tsunami-ravaged areas.

The 3rd MEF makes up a significant chunk of the forward command element and joint task force, said Army Lt. Col. Vi Strong, a PACOM spokeswoman, but, she added, PACOM personnel from other locations also will join the campaign.

The command element and task force will engineer the U.S. military effort in the region and work with the State Department, U.S. Agency for International Development, host nations and humanitarian relief agencies to identify requirements and conduct humanitarian assistance.

&#8220;U.S. forces are moving rapidly to provide the needs and services requested by the governments of the region,&#8221; Blackman said in a news release issued Wednesday. &#8220;Our primary concern is to prevent further loss of life, and to conduct sustained disaster relief operations.&#8221;

The first three of six C-130s left Tuesday, less than 24 hours after the squadron was notified about the mission.

The six C-130s will be operating out of the air base at Utapao, Conway said.

The remaining aircraft left Wednesday and stopped along the way to load humanitarian relief items from Kadena Air Base. More than 3,000 cases of Meals, Ready to Eat and four pallets of fresh water were processed through Kadena&#8217;s cargo area Tuesday.

The aircraft will be used for localized airlifts, making short runs around the devastated areas to haul relief aid.

The establishment of the forward-operating base in Utapao is the first step in what likely will be a broad effort.

The mission&#8217;s specifics are still being finalized, he added, as assessment teams gain more information.

Eventually, Yokota&#8217;s 374th Airlift Wing will have about 100 people working in Thailand as part of the joint task force. Other airmen from Pacific Air Forces and Kadena will tackle separate missions.

&#8220;We will be part of the advance group, a headquarters element with capabilities to conduct airdrops and provide airfield assessment teams and ground controllers in places where existing airfields have been heavily damaged.&#8221;

Ships steaming to Southeast Asia that could be committed to humanitarian assistance, if necessary, include the USS Shoup, USS Shiloh, USS Benfold, and USNS Ranier &#8212; all assigned to the USS Abraham Lincoln Carrier Strike Group.

There are 2,100 Marines and 1,400 sailors embarked aboard the Bonhomme group and with the 15th Marine Expeditionary Unit.

A ship with a field hospital will also be sent, he said.

Two more ships based at Diego Garcia with a 90,000-gallon fresh water capability will be sent as soon as possible.

PACOM recently played an integral role in disaster relief in the Philippines, dispatching about 600 Marines to assist flood victims there.