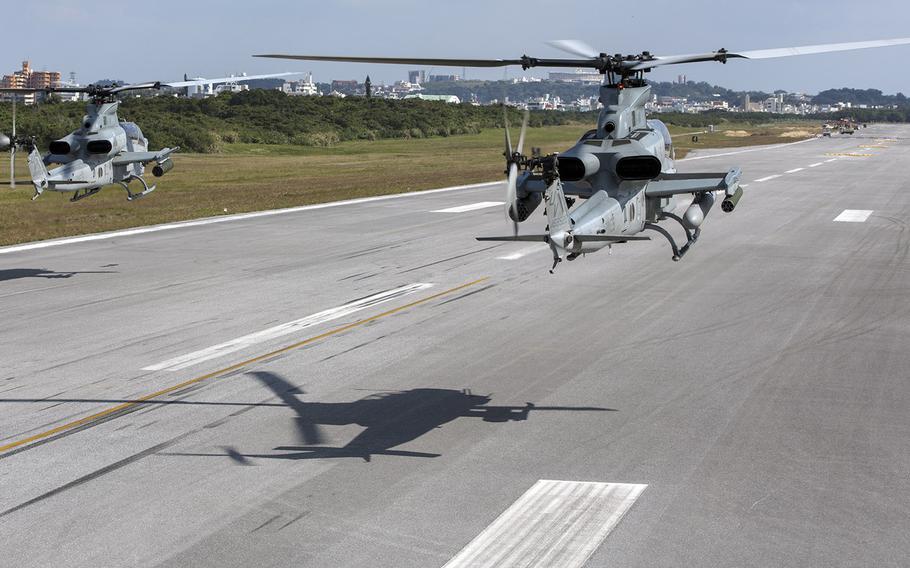 CAMP FOSTER, Okinawa — No injuries or damage were reported Tuesday evening after a Marine Corps helicopter made an emergency landing on Okinawa for the third time this month.

An AH-1Z Viper from Marine Corps Air Station Futenma’s 1st Marine Aircraft Wing was brought down at a municipal helipad on Tonaki Island, Marine and Okinawa Defense Bureau officials said. The pilot decided to land after a warning indication went off in the cockpit during routine training.

“The aircraft systems performed as designed and notified the pilot of the issue,” 1st MAW spokeswoman 1st Lt. Karoline Foote told Stars and Stripes in an emailed statement. “The aircrew performed as trained and chose the safest option, landing the aircraft in accordance with standard procedures.”

Marine officials sent a maintenance team to the site Wednesday to inspect the Viper and fix any issues to ensure that it was safe to return to Futenma. It departed that morning, Japan’s Kyodo news agency reported.

These mishaps led Secretary of Defense Jim Mattis to apologize to his Japanese counterpart, Defense Minister Itsunori Onodera, during a Jan. 9 phone call. Aviation accidents are a particularly sensitive issue on the southern island prefecture of Okinawa, where past incidents caused civilian casualties that led to anxiety and fear among locals who in turn apply pressure on Tokyo.

Onodera told reporters Wednesday the ministry had requested that the U.S. military conduct thorough checks on all Vipers at Futenma and refrain from flying them until they are checked, the Asahi newspaper reported. He said there have been “too many” recent incidents involving Marine aircraft.

Japan’s Chief Cabinet Secretary Yoshihide Suga reiterated Onodera’s sentiments during a Wednesday news conference, but said the importance of the U.S.-Japan alliance as a valuable deterrent in the Pacific region should not be overlooked.

“Ensuring safety is the premise for U.S. military flights and these accidents by the U.S. military are something that should not happen,” he said.

The most incensed reaction came from Okinawa’s anti-base Gov. Takeshi Onaga, who called U.S. forces in Japan “crazy” due to the number of recent incidents, Kyodo reported.

“The U.S. military is losing control,” he told reporters Wednesday morning, according to the Mainichi newspaper. “There is no sign of improvement even after protests are made.”

Onaga was scheduled to meet Thursday with officials from the U.S. Embassy and Japan’s defense and foreign ministry officials in Tokyo, an Okinawa Prefectural Government official said. He is expected to lodge a protest over the latest mishap, urge emergency checks on all U.S. military aircraft on Okinawa and request that the U.S. military not fly them until the checks are completed.

Onaga will also urge the U.S. to come up with concrete preventative measures, the prefectural official said.

The latest incident will surely embolden Okinawa’s small but potent protest movement, which is backed by Onaga, and could lead to renewed demonstrations against U.S. military aircraft and plans to relocate Marine air operations within the prefecture, from Futenma to Camp Schwab in Okinawa’s remote north.